The Main Street Electrical Parade has ended its run at the Magic Kingdom. In October 2016 it made its last appearance at Walt Disney World. It’s moved to Disneyland.

This parade has been around the block a time or two. It’s back and better than ever. This is a not to be missed part of any vacation in Orlando. The parade features music, characters, dancers and floats. There are some special additions for the holiday version.

The parade has some great scenes from Disney Movies through the years. From Cinderella to Peter Pan and even Dumbo. 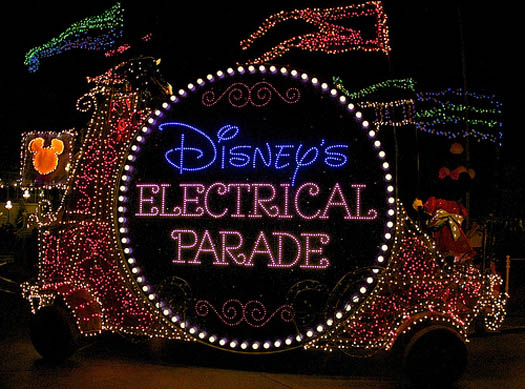 Avoiding crowds during the parade can be difficult. You have to arrive early to get a good seat. One way to avoid the crowds is to go to the Dessert Party at Tomorrowland Terrace. It’s not a great place to watch the parade, but it’s a fun way to spend the evening. You can slip down and catch the parade and come back and stuff yourself full of sweet desserts. (A great thing for the kids right before bedtime.)

When you go to the Magic Kingdom it’s important to have a plan to get through the park. The average guests sees 9 attractions in a day. That’s not very good. At Touringplans.com they have plans that can let you see at least 20 attractions on most days. They have over 140 touring plans for all of the parks that will vastly reduce the time you spend in lines.

Tinkerbell leads the Main Street Electrical Parade through the Magic Kingdom. Following Tink are a long procession of characters, floats, and scenes from familiar Disney movies from long ago. The Disney movie scenes are from –

Uncle Walt was very patriotic and to honor America the parade ends with a tribute to our country including a bald eagle and a huge American flag.

The parade is shown nightly. Usually it starts in Frontierland at 8:00 and winds through the park and ends on Main Street. If there is a second showing at 10:00 it will usually start on Main Street and go back to Frontierland.

This is one of the highlights of the day for most guests. To get a really good spot, you will have to line up at least 1 hour before the parade starts, and you won’t be the first one to line up. Prime spots are, Main Street USA and both sides of the street in Frontierland.

History of the show

The first showing of the Main Street Electrical parade at Disney World was June 11, 1977 (yes, that was a long time ago). It continued for 24 years, all the way until September 2001 when it was replaced by SpectroMagic. Through the years some sections have come and gone (Pinocchio’s Underwater scene). In the new edition Tinkerbell replaces The Blue Fairy, and It’s a Small World disappears (thank goodness) but overall most of the floats are updated but still very familiar.

When Disneyland first started, Uncle Walt noticed that guests were leaving the park in the afternoon and there was no one left in the evenings. He needed something to keep guests in the park after dark and came up with the nighttime electrical parade and the fireworks display. Needless to say, Uncle Walt knows how to put on a show and the parade and Wishes are some of the best things Disney World does. Make sure you see both on your next vacation to Orlando.