Mickey’s Once Upon a Christmastime Parade The Best Parade at WDW!

Mickey’s Once Upon a Christmastime Parade is a spectacular celebration of the holidays – complete with all your favorite Disney pals and Santa Claus himself! 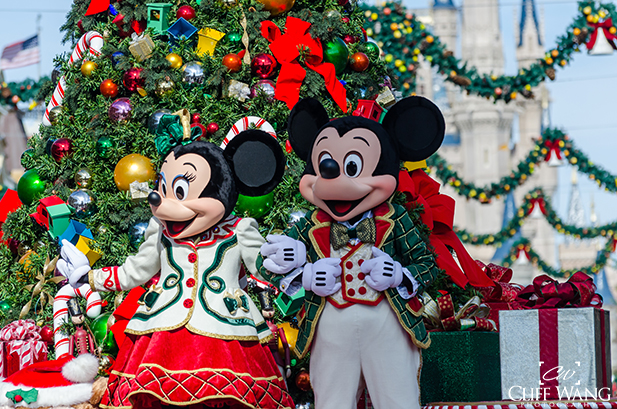 This parade is really something special, bringing together Disney magic, classic Christmas music, and symbols of the season – like reindeer, gingerbread, and snow. It’s been a mainstay of the Christmas season since 2007. 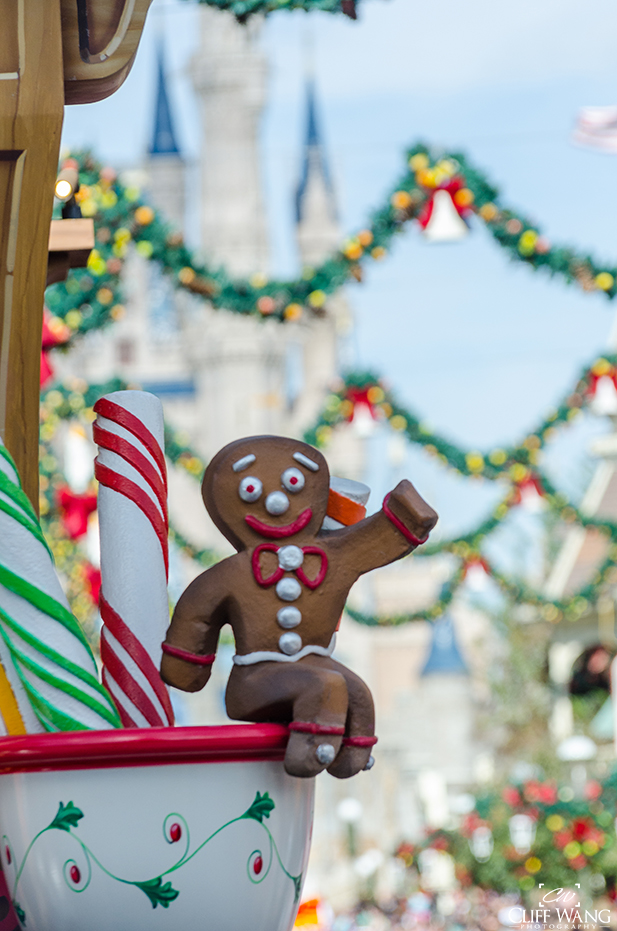 The details on each float are incredible – Photo by Cliff Wang

Before Mickey’s Once Upon a Christmastime Parade kicks off, a group of performers called The Kringle Crew head around to warm up the crowd along the route from Frontierland to Main Street USA.

Before you know it, the music comes alive and a whole host of merry characters decked out in their winter best come dancing by, followed by Mickey and Minnie on a giant float complete with a totally trimmed tree!

Next up, 3 whole floats are dedicated to Frozen (a little much perhaps) with Anna, Elsa, Kristoff, and Olaf all making appearances.

Then Chip ‘n Dale arrive with a crew of dancing gingerbread men, while Clarabelle whips up delicious treats in her kitchen. Vanellope and Wreck-It-Ralph also appear in some Sugar Rush inspired gingerbread creations.

The Seven Dwarfs come hand in hand to introduce the Princesses – Snow White gets her own sleigh and Cinderella is in pumpkin carriage, while all the others gather on the biggest float in the whole parade. It’s a great chance to see them all with their Princes, who rarely appear otherwise.

The finale is Dad’s favorite part of the whole parade. A toy solider marching band plays loud and clear as they make way for dancing reindeer and Santa in his sleigh floating high in the sky. It’s the perfect ending.

How To See It 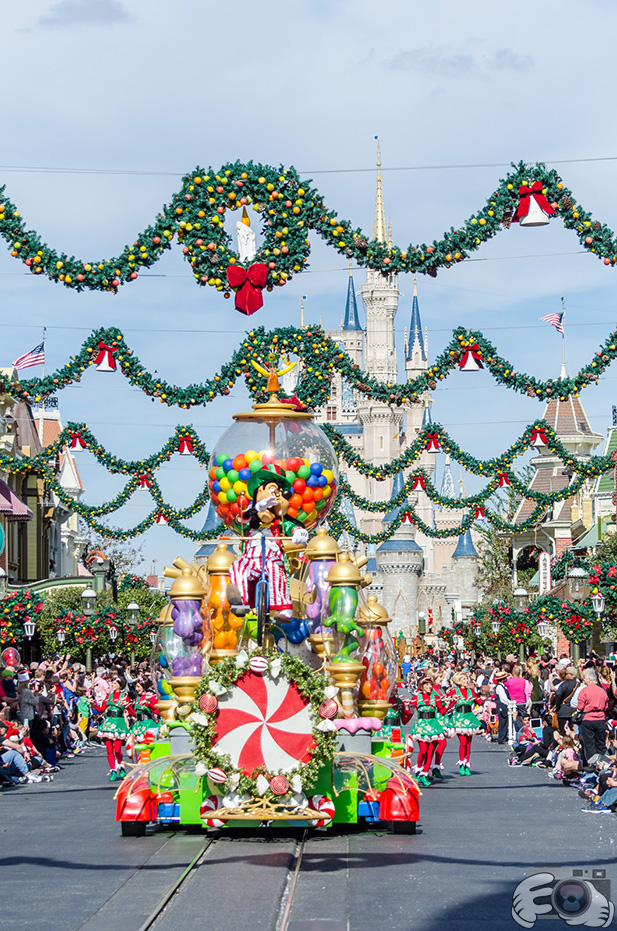 As one of the Magic Kingdom Christmas Shows, Mickey’s Once Upon a Christmastime Parade is available to all guests as a part the holiday entertainment schedule from the weekend before Christmas through New Years. 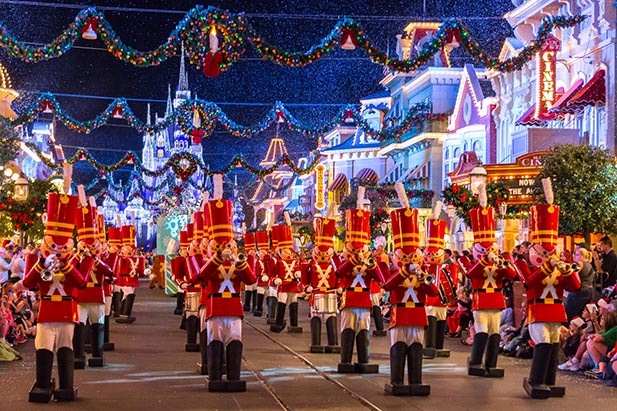 Mickey’s Once Upon a Christmastime Parade is shown twice nightly during Mickey’s Very Merry Christmas Party in November and early December. This is your chance to see the Parade at night when the lighting makes it extra pretty.

Watch It At Home

Can’t make it to WDW this year to see Mickey’s Very Merry Christmas Parade in person? That’s okay, do what Dad does and watch it at home:

The Parade coming down Main Street – Video by BigFatPanda 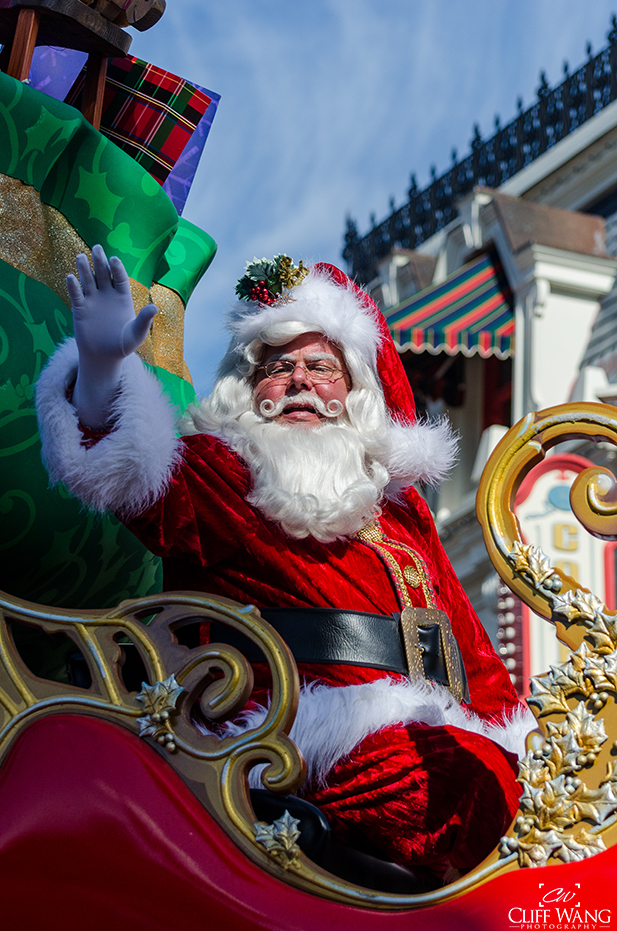 Don’t confuse Mickey’s Very Merry Christmas Parade with the spectacle that you can watch on ABC on Christmas morning. There are no celebrities, high school marching bands, or television crews present here – but don’t worry, the floats and performances are just as good!

The Magic Kingdom has the best parades anywhere, hands down. Mickey’s Once Upon a Christmas Time Parade is no exception. Make sure you see it if you’re visiting during the holidays – you’ll never see a better Christmas Parade.