Mickey’s Very Merry Christmas Party (MVMCP) is a Christmas party in the Magic Kingdom Disney style. This is soooooooo cool!

Disney really knows how to throw a Christmas party. Cocoa and Cookies, incredible holiday shows starring Mickey and all his Disney pals, a stunning Christmas parade and maybe the best fireworks show ever.

Mickey’s Very Merry Christmas Party is a very special event that happens every holiday season in the Magic Kingdom. On select dates, the Magic Kingdom closes early (7 pm) and the party begins.

This is a special ticketed event and you have to have a ticket to attend.

Tickets can, and should, be purchased in advance. You can buy them at the gate but it costs extra and many of the parties sell out and tickets aren’t available at the gate.

Tickets are on sale now. Prices start at $105 and go up to $155. November is cheaper than December.

Your party ticket will get you into the park starting at 4:00pm. If you want to visit the Magic Kingdom before 4:00 pm you will need a regular ticket to get in, but you don’t have to use a regular ticket if you come after 4:00.

That also means you can park hop without having a park hopper option. Go to EPCOT or one of the other parks during the day and after 4:00pm come to the Magic Kingdom and enter with your party ticket.

You can add your Mickey’s Very Merry Christmas Party Ticket to your MyDisneyExperience account and it will be on your MagicBand. I would suggest you print out a copy of the ticket and bring it with you just in case. 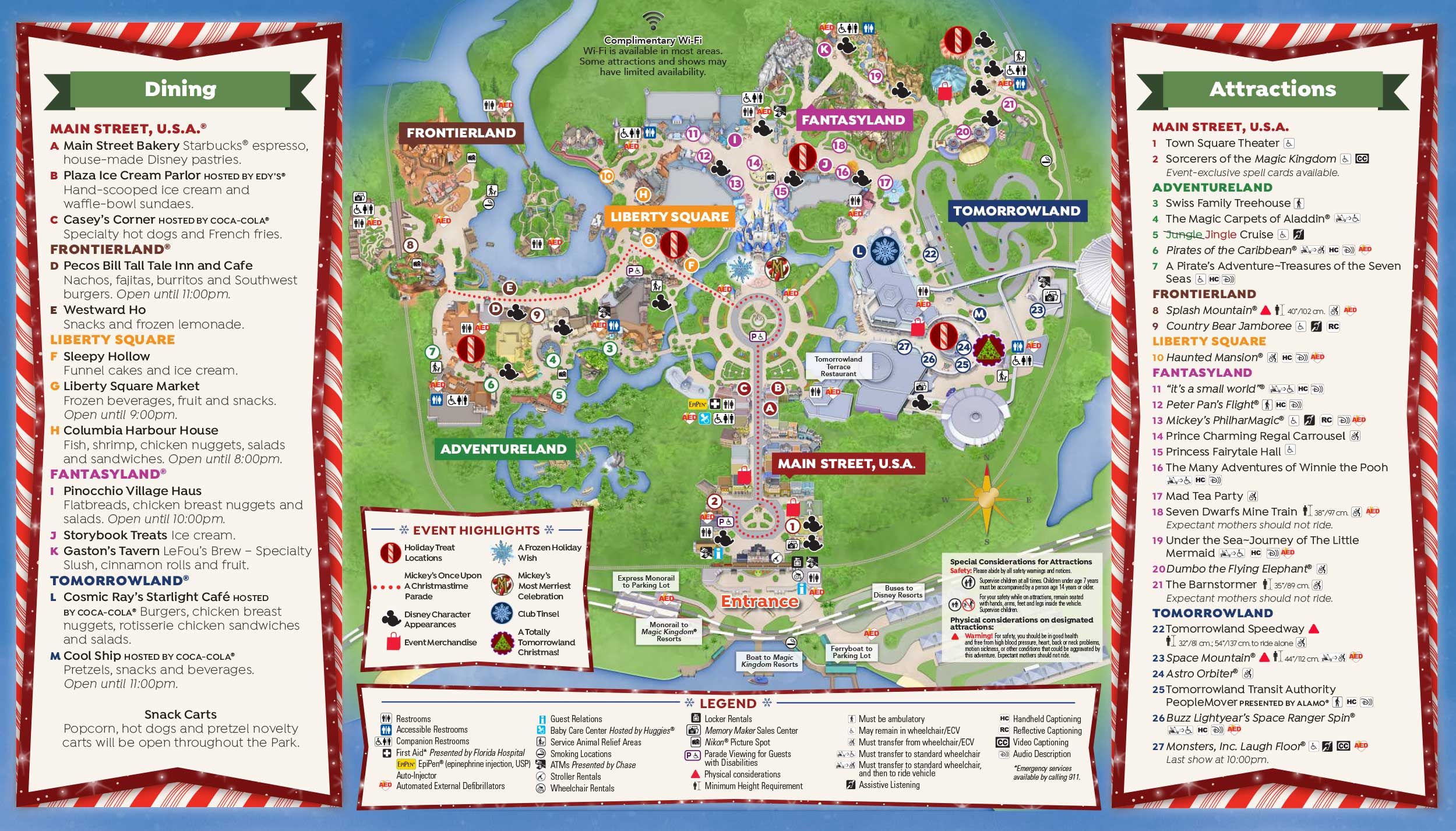 Mickey’s Very Merry Christmas Party kicks off with a short skit on the Castle Stage where Elsa, Anna, Olaf and Kristoff invite you to celebrate Christmas and Queen Anna uses her magical powers to light up Cinderella Castle.

Check out this video…

Cinderella Castle glows all throughout the night. The 300,000 holiday lights are really incredible.

One of the big benefits of going to Mickey’s Very Merry Christmas Party is short lines on the rides. We’ve walked on to Space Mountain and other rides during parties we’ve attended.

Not all of the attractions are open during the party, but most of them are. Here’s the list of what to expect.

This list changes from time to time and attractions may be closed at any time due to unforeseen circumstances.

One of the big draws during Mickey’s Very Merry Christmas Party is the special Holiday shows that happen during the party.

The show includes singing, dancing and even Stitch on a trans-dimensional hunt for Santa himself.

Mickey’s Most Merriest Celebration – A big Christmas extravaganza on the Castle Forecourt Stage starring Mickey and all his friends, plus Clarabelle Cow, Chip and Dale, Woody and Jessie, Panchito Pistoles and Jose Carioca, Snow White and Dopey, Peter Pan and Wendy, Pinoccho and Jiminy Cricket, plus Alice and the White Rabbit. There’s lots of good music and dancing.

Character Dance Party – During the party you can “Dance the Night Away” with Disney characters at Cosmic Ray’s Starlight Cafe. How fun does that sound?

Disney does parades better than anyone else. That’s a fact.

The parade at Mickey’s Very Merry Christmas Party is truly something special. It’s called the Once Upon A Christmas Time Parade and it’s not to be missed!

Take a look at the highlights…

All of the characters are out in their holiday finest. There are dancing reindeer, a band of soldiers, dancing Gingerbread men and a visit from the big guy himself…

The Once Upon a Christmas Time Parade is shown 2 times each night during the party – usually at 8:15 and 10:30.

Dad’s Mickey’s Once Upon a Christmastime Parade

Another of the best parts of Mickey’s Very Merry Christmas Party is the fireworks show. At 9:30, Holiday Wishes: Celebrate the Spirit of the Season hits with a bang.

As with all the Disney fireworks shows, the music is great and the fireworks are spectacular. This is truly a 360° fireworks display as volleys come from all around the Magic Kingdom.

Timeless Christmas carols are the perfect backdrop to this magical display. The show last approximately 12 minutes and ends with the patented Disney BANG which absolutely lights up the sky!

The neatest things at Mickey’s Very Merry Christmas Party has to be the snow on Main Street. Most of the night, snow will fall from on top of the buildings.

OK, it’s not really snow, it’s more like soap, but it looks like snow without the cold.

MVMCP is a great place to do Character Meet and Greets. The Characters do come out to celebrate in their Chrismas finest.

Here are some of the characters who are routinely found at the party. They usually show up in Storybook Circus.

There is a special line that forms at Princess Fairytale Hall for party guests. Many of the princesses will be available for meet and greets – with their princes!

Lines for Meet and Greets can get pretty long during the party so line up early.

The number of tickets sold to MVMCP is a closely guarded secret. Only Disney knows how many people are in the parks. Through the years, it seems like that number has gotten bigger.

All-in-all the crowd levels at the party aren’t too bad. Crowds do pile up around the parade route for both showings of the parade. Also, Main Street becomes a sea of people after the first parade for the Holiday Wishes show.

That being said, most of the rides have very short lines. We’ve been to sold out parties and walked onto rides like Buzz Lightyear and even Space Mountain.

One of the really cool things at Mickey’s Very Merry Christmas Party is the Cocoa and Cookies. Disney hands out Cocoa and Cookies all during the party at locations around the Magic Kingdom.

Just stop by one of the following locations and pick them up.

Hey, getting something for free from Disney is pretty cool and if it’s cold, the hot cocoa is very welcome. By the way, allergy-friendly cookies, apple slices, and apple juice are available on request.

Dad is a huge fan of Christmas at Walt Disney World. Not only Mickey’s Very Merry Christmas Party, but everything. The hotels get all gussied up, the other parks get Christmasified, Disney Springs hosts Santa, it’s just the Most Wonderful Time of the Year.

Check out more about Christmas at WDW on…

Dad answers all kinds of questions and has answered a bunch of questions about Mickey’s Very Merry Christmas Party. Check out a few of the best.

As usual, Dad has a song running through his head. It’s just the way I roll. The song that’s rolling around the gray matter is “Should I stay or should I go…”

That’s a big question when it comes to Mickey’s Very Merry Christmas Party. Should you go, or not? To be quite honest, it’s very expensive. For a family of 4 it will cost around $300.00. That’s a lot for a few hours.

So what are some reasons to go or not to go to the party?

Dad put together a couple of blog posts with some pretty good reasons on both sides for why to or not to go to the party.

Dad’s Big 5 Reasons not to go to MVMCP

Mickey’s Very Merry Christmas Party is one of Dad’s favorite things at Walt Disney World. Is it worth the price? That’s another story. We like to do this on our first day when we arrive in Orlando. A day when we wouldn’t normally visit a park so we’re not paying double for tickets.