Add a Disney Cruise for a Total Disney Family Vacation

The only thing better than going to Walt Disney World is adding a Disney Cruise for a total Disney family vacation. Disney’s 7 night land and sea package gives you the best of both world. A great Disney World vacation followed by a cruise directed by the big guy himself. (M I C – K E Y, sing along with Dad, M – O – U – S – E. Who’s the leader of the band … Come on now …)

There really is something magical about a cruise. For years cruising was reserved for the wealthy, or it was a grown-up thing. In the 80’s cruise lines started paying attention to children. Finally in 1995, the Disney Cruise Line was introduced and family cruising was born.

The Disney Cruise Line – Disney Magic in the morning 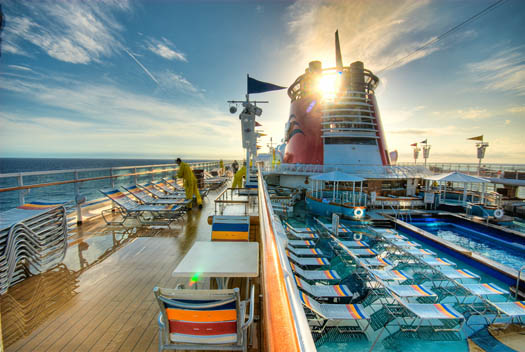 A great sunrise on the Disney Magic by flickrized

In 1995 Disney announced they were entering the cruise business. The cruise world laughed. A cruise ship run by a mouse, and a duck and a bunch of dogs will never work. It was true that Disney didn’t have any experience in the cruise industry, but like everything Disney does, they hired the best talent available, and turned the industry on it’s ear.

The Disney Cruise Line has a great reputation in the cruise industry. As with everything Disney does, they have taken cruising to the next level. From the food, to the entertainment, to the ship’s crew, everything is top of the line. Hey, even the guys that paint the ships between voyages are the best.

The Atlantis Resort in Nassau, Bahamas 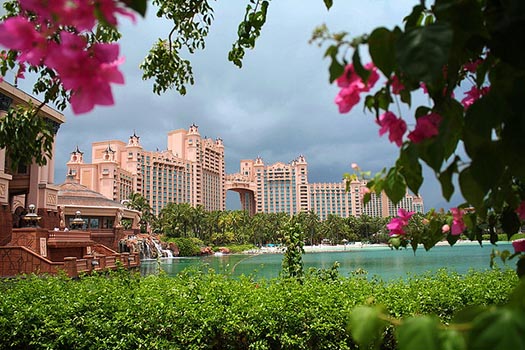 Nassau is the capitol of the Commonwealth of the Bahamas. (The Bahamas are the islands just off of the eastern coast of Florida.) It’s located on the island of New Providence. The Bahamas Islands were part of the British Empire until 1973. The British influence is still seen all around the island. There is a lot to do while you are on the island.

The mega-resort Atlantis is located on Paradise Island which is connected to New Providence Island by bridge. There are beaches, casinos, lots of shopping and some really neat swim with the stingray/sharks/dolphin type experiences. 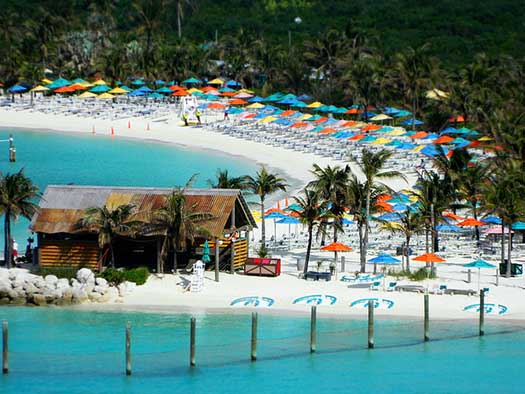 Want to spend a relaxing day on a beautiful private island complete with snorkeling, swimming, boating, parasailing and even The Flying Dutchman. (Yep, that’s right, Captain Jack Sparrow’s ship is here in Castaway Cay. It’s actually one of the ships that was used in the movie.)

Hey, Dad, what is there to do on Castaway Cay?

If you like beautiful white sand beach’s, clear tropical blue water, hammocks you’re in luck. Castaway Cay is truly an island paradise. There are miles of white sand beaches. Disney has even cordoned off one beach for adults only. There is water to swim in. Boat rentals are available. You can snorkel out to an area where 2 of the submarines from the old 20,000 Leagues Under the Sea ride have been placed. There is even an place where you can feed sting rays.

What if I get hungry?

You have a couple of options if you get hungry. You can go back to the ship, or you can grab a bite on the island. (It’s included in your cruise price.)

Castaway Cay is a really neat place to spend a quiet day relaxing in a tropical paradise.

The Disney Cruise Line has 4 ships currently. The Disney Dream, the Disney Fantasy, the Disney Magic and the Disney Wonder. 3 new ships will be coming in 2020, 2021 and 2022. 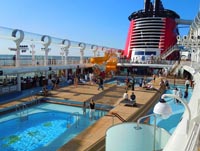 The Disney Dream is a larger version of the current Disney ships. It’s 1,115 feet long and hold 4,000 passengers. It has wi-fi throughout the ship. There are some new mind-blowing features on the Dream, including a virtual porthole in all inside cabins and the AquaDuck.

The Dream features the first “water park” on a cruise ship.

The Disney Magic is the original cruise ship Disney built. It first sailed in 1998. The Disney Magic is 964 feet long and can carry 2,400 passengers. It has a crew of just over 900. Disney set out to bring back the feel of elegant cruise ships. Like it’s twin the Wonder, the Magic is full of Magic.

The Disney Wonder first sailed in 1999. It is almost identical to it’s sister ship and it’s new big sisters, They are patterned the ships after great cruise ships of the early 20th century. Each vessel has a elongated black hull with two matching red funnels. Though made to look like classic cruise ships these babies are state of the art. 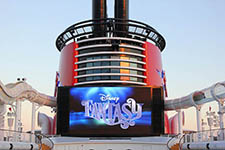 The Fantasy is the newest addition to the fleet. It’s a twin to the Dream with a couple of differences. The Fantasy is doing the 7 day Caribbean runs from Port Canaveral.

Like the Dream all of the inside cabins have a virtual porthole and the pool deck has the huge AquaDuck.

Port Canaveral, Florida (yes, like the place the launch space ships) is the home port for the cruises. Port Canaveral is about an hour drive from the Orlando International Airport (add 30 minutes if you are starting at Walt Disney World).

Several forms of transportation are available to get to your cruise. You could walk, but that would be a little silly, you could drive or you can find someone to take you.

If you want to drive to Port Canaveral from Orlando, you take SR (state road) 528 east out of Orlando. You’ll reach SR401 until you see signs for Cruise Terminal A.

The bus to the Disney Cruise 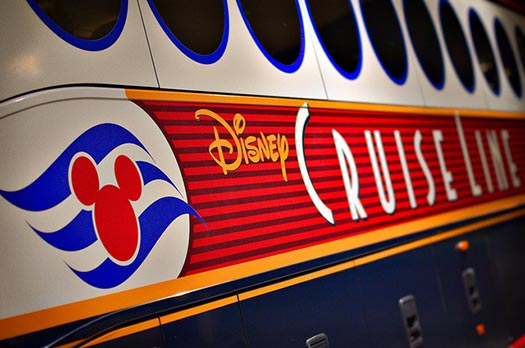 Disney will be happy to take you to your cruise. They charge about $70.00 per person to take you from your hotel to the ship (roundtrip).

I know it sound silly, but you might be able get a limo to take you to your cruise for less than Disney Transportation. Limo companies charge per car. For example it cost around s $350.00 to take you in a Limo from Walt Disney World to the cruise terminal and back to the airport. That’s for up to 9 people. (See what happened when Dad rented limos for the family.)

Booking a cruise can be easy or it can be hard. It’s hard to know how and when to book your cruise. Don’t worry, Dad has you covered.

Dad’s How and When to book a Disney Cruise page

When booking a Disney Cruise, or any cruise for that matter Dad suggests you contact a GOOD travel agent. Yes, it’s possible to book online without using one, but qualified travel agents can really help with your cruise. Dad has partnered with one of the best Disney Travel Agents you can find. The Disney Vacation Planners at Destinations to Travel know almost as much about Disney as Dad does.

Adding a Disney Cruise to a Walt Disney World vacation is a great idea. There is nothing more relaxing than sitting on cruise ship, sipping your favorite beverage and watching the sun go down. A perfect way to end, or start, a perfect vacation.