Yes, O Canada is the national anthem of the country of Canada. It’s also the name of the Circle-Vision 360° movie in the Canada Pavilion of EPCOT. This is the best of the World Showcase’s movie in the round.

Martin Short (noted actor) is the host for this 15 minute movie that is full of sights from around Canada. 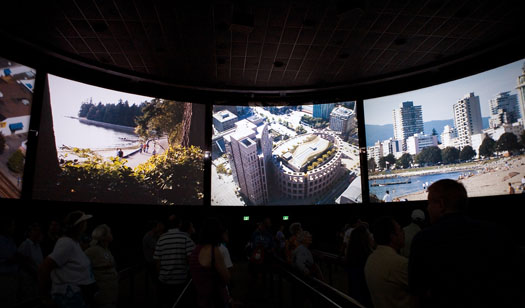 There is no preshow for this attraction, but you do wait in a cave. What that has to do with Canada, I don’t know. It’s kind spooky and not really comfortable.

See scenes from Ottawa, Toronto, Quebec City, Moose Jaw and Medicine Hat. All are famous (if only because they are mentioned in the film) cities in Canada.

Scenes show ice fishing, hockey, whitewater rafting and even the Royal Canadian Mounted Police. Some of the ariel scenes are breathtaking.

The show ends with Martin Short inviting you to visit Canada. His easy to follow instructions end with “turn left at the big silver ball”. (Mrs. Mom’s O Canada story.)

Just like the preshow, there is no postshow. You exit out into the bright Florida sunshine, which can be a problem after standing in the dark for 30 minutes or so.

The original film opened in 1982 with the opening of EPCOT. The film was updated in 2007 when Martin Short was added and some of the footage of Canadian cities was redone.

All of the Circle-Vision 360° can cause feelings of motion sickness. If you feel uneasy during the movie you can try one of 3 things.

Warning number 2 – there aren’t any chairs in this show. You have to stand for the whole movie. It can get uncomfortable.

Dad has a real problem with motion sickness so the Circle-Vision 360° movies present a real problem for Dad. The movie is beautiful and some of the scenes are outright breathtaking if you can stand to watch them.

Disney also needs to find a way to make the Circle-Vision 360° experience more comfortable. It’s hard to stand in one place for that long. (For Dad it’s nearly impossible.) Maybe one of those fancy Imagineers could build a chair that rotates 360 degrees, or a floor that is easier on the feet.