EPCOT World Showcase Take a Trip Around the World

History, Culture, Food and Fun are all found in EPCOT’s World Showcase. What did you say, Dad? Fun? Yes, FUN. It’s fun to see the beauty of other countries, watch their history, sample their food, see the native entertainment.

Uncle Walt tested his first rides at the Worlds Fair. The World Showcase is Disney’s tribute to the concept of a World’s Fair. It has offerings from a number of different countries and cultures. Each of the countries is staffed by cast members from the country, which brings a real authenticity to the experience. 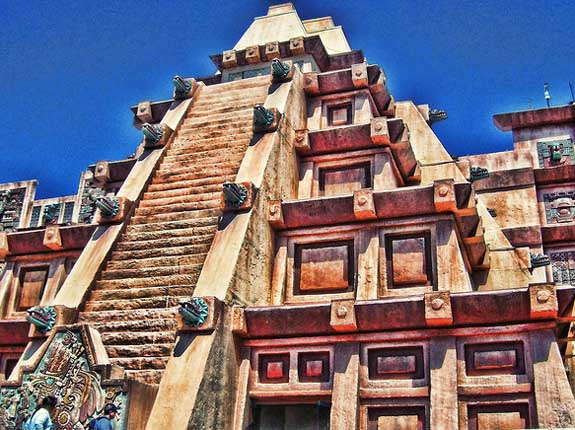 Either way you go, to the left or to the right, you will start with a country that border the United States. We’ll start as you walk in from the main gate by going left (that’s where all the rides are). Here are the countries of the World Showcase

Walk into the Mayan Temple and find treasures at every turn starting with a tour lead by the Three Caballeros of the country of Mexico. In the plaza there is some great shopping and some authentic (for America) Mexican food and drink.

Step outside and you can also get some fast or slow food and eat right on the World Showcase Lagoon.

Norway is an old country with lots of history and tradition. But it’s the newest country in EPCOT (which doesn’t mean much since it opened in 1988).

In Norway you can see your favorite Frozen Characters and Princesses. The Princess character meal at Akershus Royal Banquet Hall is one of the most popular meals at Disney World.

The wonders and beauty of China are on display in every corner of this pavilion. There are even some hidden treasures like the Tomb Warrior exhibit. The acoustics in the temple are astounding.

In Wondrous China, you can see the wonder and beautiful of one of the oldest countries of the world.

The Germany Pavilion is the first pavilion (from the left) that doesn’t have an attraction, but there is a lot to see (and eat) in Germany.

There is a Biergarten and shopping. Lots of shopping. You can get chocolate, watches, and just about anything else that’s made in Germany. The only thing missing is the Mercedes (which you can probably order somewhere).

Between Germany and Italy there is an area where Disney has set up a garden railway complete with several model trains.

The layout is 150 X 30 and features 3 LGB (Lehmann Gross Bahn) engines that pull a few cars around the tracks. This is easy to miss, but don’t. Dad can spend hours here. This is one of those neat little things that makes Disney special. The details of the village, the countryside and things around the track are amazing.

Italy may be the best looking (and the best smelling) EPCOT Pavilion. The statues and restaurants make for a wonderful combination.

The new pizza restaurant brings something that has been lacking in EPCOT since it opened. Good pizza!

The American Adventure. The host country of this World Showcase sits right in the middle of the countries. This pavilion tells the story of America.

Step inside the American Adventure and see history from the founding of the country to the exploration of space.

The Japan Pavilion in EPCOT is the perfect balance of beauty, order and good food (plus a little noise thrown in). The gardens (which are well hidden) are beautiful.

The dining, entertainment and shopping in Japan are incredible and not to be missed.

Morocco is one of the least visited pavilions in EPCOT. There is a lot here to see, buy and eat. You can even learn to belly dance. Come on, Mrs. Mom, let’s go.

Most of what you’ll find here is shopping and dining. Oh yeah, you don’t want to forget the music.

Belle and the Beast, Luminere and Mrs. Potts, Be our Guest and more. This is France. (There’s even an Eiffel Tower.) Food, food and more food.

The movie Impressions de France is held in a real theater (you get to sit down). Which is great, because by the time you arrive there, you’ll be ready for a sit down.

The United Kingdom is another of the skippable pavilions that has some beautiful things to see, some good food to eat and even some good music.

The United Kingdom is home to Dad’s favorite quick service restaurant in EPCOT. The UK is famous for fish and chips and if this is any indication of what to expect, maybe we need to take a trip.

The last (or first if you start on the right side of the lagoon) pavilion in the World Showcase is Canada. O Canada! Wow, this place is incredible.

The best steak at Disney World can be found here along with a great movie about our neighbors to the north.

Here is all you need to know about the World Showcase. From dining to crowds to hours, Dad’s got it all.

Eating in the World Showcase is at time nothing short of amazing. Some of the best restaurants in EPCOT and even in the world can be found in the countries. There is something here for everyone.

Drinking around the world

EPCOT was the first Disney Park where alcohol was served. When EPCOT opened Disney decided that drinking was part of the experience from around the world and started offering drinks at the restaurants (and in some of the shops).

One of the favorite “games” that’s played in EPCOT is called “drinking around the world” (or at least it’s one that’s talked about a lot in some forums). Although Dad doesn’t participate, lots of people talk about the drinks found in the pavilions. Please, drink responsibly (for Dad that means only 3 Cokes per day when I’m driving.) 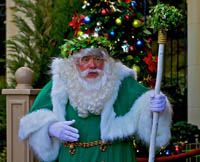 During the year all kinds of events happen in EPCOT. The best happen in the World Showcase.

Holidays around the World – is the way EPCOT celebrates Christmas. In the World Showcase you’ll see the story of Santa Claus from each of the countries that celebrate the holidays.

Then there is the Candlelight Processional which is Dad’s Favorite part of Christmas at Disney World.

EPCOT Flower and Garden Festival – in March, EPCOT is taken over by flowers. Beautiful Flowers. The Flower and Garden show lasts from March through May with flowers, lectures by celebrities from the Home and Garden Channel (HGTV) and some really good classic music.

The events here are world class. The shows that happen almost daily at the American Gardens Theater are as good as it gets (and free too). Mrs. Mom and I stumbled across one of these concerts years ago. It was nothing short of amazing. (Check out Dad and Mrs. Mom’s World Showcase musical experience.)

In every pavilion there is some form of entertainment to catch your eye. Dad’s favorite is the Voices of Liberty in the American Pavilion. But there are the drummers in Japan, the British Invasion in the United Kingdom, MoRockin in Morocco…

I could go on for a while. These sometimes overlooked gems are the best part of EPCOT. They provide entertainment and education at the same time.

Entertainment changes all the time. Check out your park maps for performance times. Disney is the king of entertainment and these offerings are what separate Disney Parks from other theme parks.

At Walt Disney World crowds are just part of the package. Not so much in this part of EPCOT. Since there are really only 2 rides the crowds rarely affect touring. However, lines can form for the rides and even the shows.

Dad recommends Touringplans.com for every visitor to Disney World. TouringPlans has all the crowd information for each park plus over 140 plans to help you avoid crowds. Their Lines app will tell you how long the lines are at any ride in real time. 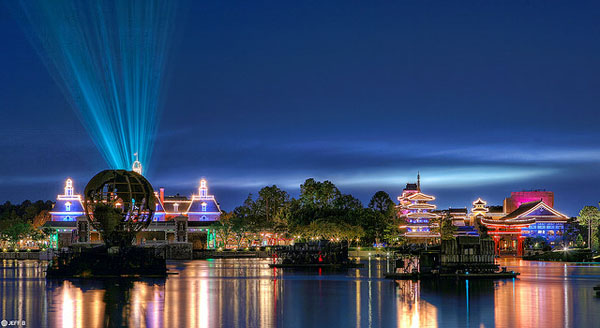 Through the years Disney has tried several programs to get children more involved in the World Showcase. I remember when we would buy (I think they are still available) Passports for the kids and take them to each country where a Cast Member would sign them for the children and put a stamp on the passport. It was nice, but not enough to keep the kids interested.

Kidcot Fun Stop is an area in all of the pavilions where children can create a souvenir. Each Kidcot Fun Stop (which is sponsored by Sharpie) has a Cast Member who will help children create a personalized souvenir that represents that country. There are stamps and markers for the children to use on the provided paper.

The next distraction for the children in EPCOT is the Phineas and Ferb: Agent P’s World Showcase Adventure (which replaced Kim Possible). Phineas and Ferb is an animated television show.

Adding Phineas and Ferb and Agent P to the entertainment in EPCOT is a home run for Disney. Kids love the challenge and it gets them to look at and enjoy the World Showcase.

There is more to EPCOT than just the countries. Future World is packed with the history and future of technology. Future World is home to some of Walt Disney World’s best and most thrilling attractions.

The World Showcase is a wonderful presentation of cultures and countries and food from around the world. Yes for some (like Dad) history and culture is boring but somehow Disney has found a way to make it fun (and tasty).