The Enchanted Forest in the New Fantasyland is amazing. No, I mean it. It’s amazing. The castles, the rides, the restaurants. Your will be amazed. I was when I saw it and it wasn’t even open yet. 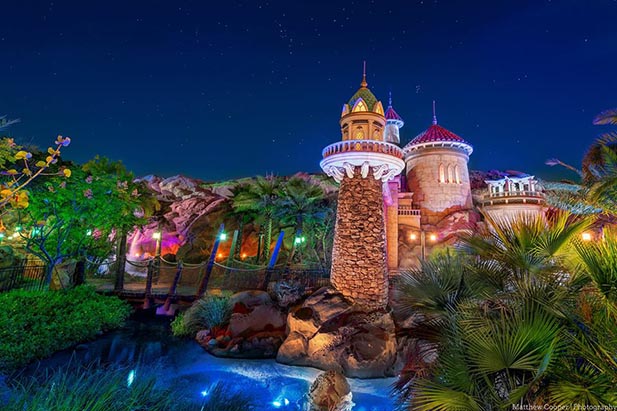 Where is the Enchanted Forest? It’s in the forest, of course. OK that’s not strictly true. The newest part of Fantasyland is directly behind Cinderella Castle in the Magic Kingdom.

Once Upon a Time

All Disney Stories seem to start with “Once Upon a Time” and most of them are set in an “Enchanted Forest”. (The Little Mermaid not so much. Oh well.) This forest is home to two (the third will be added in 2013) wonderful stories. The story of the Little Mermaid and the story of Beauty and the Beast.

Each story has its own area which are easy to spot by the Castles.

The crowning jewel of the Magic Kingdom, the virtual center of the park is Cinderella Castle. It’s the most photographed building anywhere. This amazing structure is the gateway to the Enchanted Forest. In the area around the castle there are several new and old attractions to amaze. 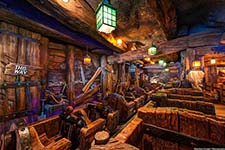 The newest roller coaster at WDW is the Seven Dwarfs Mine Train and it’s located right smack dab in the middle of the Enchanted Forest.

Hop on a mine car and take a trip to see what the Dwarfs were looking for in the mine. 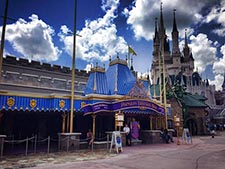 Where do Princesses come to stay when the visit Cinderella and Prince Charming? In the Princess Fairytale Hall, of course. What’s really cool about this place is the Princesses invite you to join them.

Come see Cinderella and all her guests and even say hello. You never know just what Princess is going to show up. It’s just pretty cool. 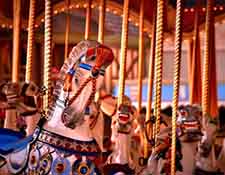 On their wedding day, Prince Charming gave Cinderella a whole stable of beautiful horses and Cinderella proudly shares them with you.

Can you find Cinderella’s favorite horse? 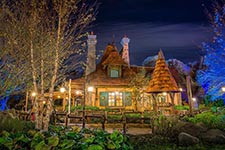 Maurice’s Cottage is the centerpiece (sorta) of the Beauty and the Beast area of the Enchanted Forest. It’s home to one of the most innovative new shows that Disney has introduced in a long time.

As you make your way into the cottage, you’ll see a lot of Maurice’s inventions. He’s quite the craftsman. When you reach Belle’s room, you’ll encounter a “Magic Mirror”. (This is the Enchanted Forest after all.) You enter the mirror into a magical world where the dishes talk and the “dresser” is the master of ceremonies. 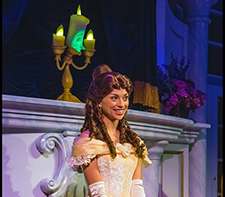 Have you ever wanted to be Mrs. Potts or maybe Chip or even a suit of armor? You can become part of the story of how Belle fell in love with the Beast. Yes, you get to be actors in a play led by Belle herself and Lumière (the candlestick).

After the show, Belle takes pictures with all of the players in the play. It’s truly and interactive experience.

See the little town Belle grew up in. You can almost imagine her walking the streets as she reads her book. You might see Gaston. He rules this town. 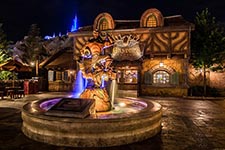 Yes, Gaston’s Tavern is located at the edge of the village right behind the statue of Gaston. (Why don’t they call this Gaston’s village?)

This tavern sells manly food in a manly atmosphere. Gaston is a hunter deluxe and this is where he stores his prized possessions.

There are a couple of shops in town including Bonjour Gifts. Check them out. You might just find the person of your dreams waiting inside. 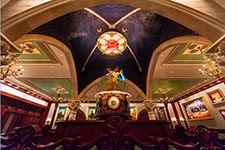 At the foot of the Beast’s Castle is a brand new dining experience. The Be Our Guest restaurant brings fine dining to the Magic Kingdom. This is the most opulent, beautiful dining rooms anywhere.

There are 3 banquet rooms. Each is themed after the a room from the movie.

You’ll almost swear you see Belle and her Prince dancing in the ballroom.

Dad’s Be Our Guest page

The far castle in the Enchanted Forest is Prince Eric’s castle. Prince Eric’s is the “Prince” from the Little Mermaid movie. His castle is home to everything Little Mermaid related. Ariel herself along with everyone from the movie shows up in the ride and you can meet the beautiful Princess herself in her own Grotto.

Under the Sea – The Voyage of the Little Mermaid 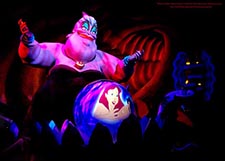 Take a ride in a clam mobile and see the story of The Little Mermaid. Descend “under the sea” and watch as Urusla takes Ariel’s voice.

All the characters from the movie show up. Sebastian welcomes you as you go “underwater” (a pretty cool effect). Ursula the Sea Witch sings “Poor Unfortunate Soul” as she steals Ariel’s voice. Check it out.

Dad’s Under the Sea page

Ariel’s Grotto is back. A grotto is an area where water comes next to land and in this grotto, the Little Mermaid has enough water to keep her mermaid form.

This is a meet and greet area starring The Little Mermaid. Take pictures, get autographs and talk to a “real” mermaid. (The scary mermaids are over at Pirates of the Caribbean.)

Every little girl dreams of talking to Ariel. Now she can.

The Enchanted Forest is amazing. There just isn’t any other word for it. Disney hit a home run with this one. Between this and Storybook Circus, the Magic Kingdom is the premier theme park in Orlando. (Yes, better than HP World.)