NOTE: The Universe of Energy closed in 2018 to make way for the new Guardians fo the Galaxy roller coaster.

The Universe of Energy is home to Ellen’s Energy Adventure. This is the longest ride at Walt Disney World. Longer is not necessarily better. This ride lasts 45 minutes.

It’s full of dinosaurs and a pretty good story about energy and how it’s created and used. The Space Shuttle scene at the end is worth the price of admission.

Ellen’s Energy Adventure is the most Universal of all the rides at WDW. What do I mean by Universal? Universal’s rides are notorious for breaking down. So is Ellen’s. On our last 3 trips we have either been on the ride when it broke down, or in line or trying to get in line when it broke down. Our last trip, we didn’t get to ride it at all because it was broken all day when we were in EPCOT.

(The pavilion underwent a refurbishment that ended in March of 2009. The computers were updated. Maybe this has made the ride more reliable.) 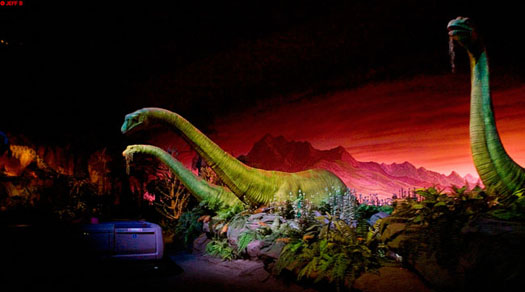 There is a preshow staging area inside the Universe of Energy pavilion. It’s just a big room you stand in until the next show starts. Once you are inside this room you’re wait will be 17 minutes or less. If you are waiting outside, you will have to wait at least 17 minutes inside before you reach the ride/theater.

As you enter the attraction you sit down in a big theater. Choose your seats well, you’ll be in them for the next 45 minutes.

The adventure starts when Ellen is in her living room watching Jeopardy. Ellen falls asleep and dreams she’s a contestant on the show and she is facing off with an old rival Smart Judy (played by one of Dad’s favorite actresses Jamie Lee Curtis) and Albert Einstein. Alex Trebek reads the categories and they are about energy, something Ellen knows nothing about. The game starts out with Ellen getting creamed.

Ellen takes a time out and calls in her neighbor Bill Nye the Science Guy who takes her through an energy adventure. Bill starts off talking about the Big Bang and progresses to the era of dinosaurs. This is where the fun begins. The theater breaks up into ride vehicles and progresses through a scene of audio-animatronic dinosaurs.

After seeing and smelling the dinosaurs, the ride vehicles come back together in a second theater. Ellen wins the game and Bill Nye goes away happy. There is an awesome scene that shows a shuttle launch. Then you hop off the ride vehicle and leave.

Crowds aren’t really a factor at the Universe of Energy unless the ride has been broken down for a while. Normally you only have to wait through 1 show (17 minutes) before you enter the pavilion.

The pavilion first opened when EPCOT opened in 1982. Ellen was added in 1996 with the title Ellen’s Energy Crisis, which was immediately changed to Ellen’s Energy Adventure. The signs outside the pavilion still say Universe of Energy.

The Universe of Energy is an interesting ride. Even though Dad is not a fan of Ellen, she does a good job here and Bill Nye is funny. The ride through the Dinosaurs is enlightening, but it’s a lot like Dinosaur over in Disney’s Hollywood Studios.

Ellen’s Energy Adventure is, at the same time, educational and interesting, pushy and boring. The sulphur smell coming off the volcano’s is a nice touch, but it’s also smells bad. That’s a good metaphor for the whole ride, it’s nice, but it stinks. Yeah, I know, that is hard to understand. The ride is too long, it’s too predictable and to educational. It’s not very Disney. The whole idea behind EPCOT was to be educational. So this ride succeeds. I’m just not sure it’s a good ride.