Aloha from Disney’s Polynesian Village Resort!  This iconic Disney resort is home to some of the best theming on WDW property, most unforgettable dining experiences, and exceptional convenience.  Once you enjoy the spectacular aroma of The Great Ceremonial House, you’ll always wish to return back to re-live the perfect paradise that is the Polynesian.

Disney’s Polynesian Village Resort has been Walt Disney World’s premier tropical oasis, located in the Magic Kingdom Resort Area since its opening on October 1, 1971—the opening day of WDW itself.

The Transportation and Ticket Center is connected, via a walking path, to Disney’s Polynesian Village Resort.  There is also a running trail that connects to Disney’s Grand Floridian Resort & Spa, which has its own pathway to the Magic Kingdom as of November 2020.

Also, as a part of the Magic Kingdom Resort Area, the Polynesian is on the Resort Monorail line.

The Polynesian is home to one of the largest standard room layouts at Walt Disney World. There are 484 rooms in total—including suites located in the Tonga Longhouse. Plus, there are 380 rooms at Disney’s Polynesian Villas and Bungalows—360 of which are Deluxe Studios, while 20 are the highly coveted over-water Bungalows.

Most rooms have 2 queen size beds (plus a day bed) and sleep 5 guests. The resort’s rooms are grouped into several separate “longhouses.” Each of has a unique name inspired by the pacific islands.

The guest rooms have a very clear Hawaiian influence, which you can notice right away through their wooden tones/textures, tan colors, and a cool shade of green used as an accent on furniture and the bedding. 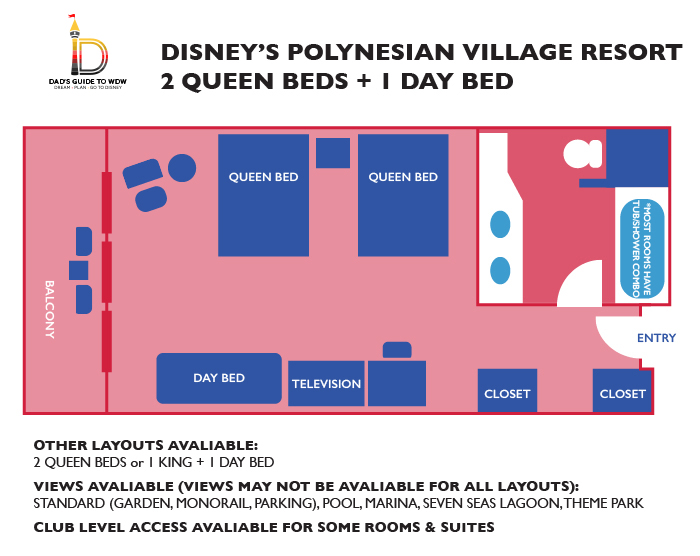 Below is a list of the furnishings in the rooms:

Each longhouse is unique, and has its own pros and cons mainly depending on location. Here’s a brief overview of each longhouse.

Aotearoa: The Aotearoa longhouse is the furthest west of any longhouse. This makes it a very long walk to the Transportation and Ticket Center, but it’s a short distance to the Great Ceremonial House. It’s also very close to Luau Cove. (You might be able to hear the Spirit of Aloha Dinner Show from your room.)

Fiji:  North of Aotearoa is the Fiji longhouse. It’s often used as a picture perfect background for photographers. Fiji’s proximity to the Great Ceremonial House, Luau Cove, and the marina make it very popular. But, it’s a long walk from the Transportation and Ticket Center.

All of the rooms in the Fiji longhouse are 415 square feet and have Standard views. Being close to Luau Cove, the evening festivities may be heard from your guest room.

The rooms in Fiji face either east or west. The east facing rooms have a view of the marina.

Tuvalu:  The Tuvalu longhouse is the most remote of the longhouses at Disney’s Polynesian Village Resort. You can almost say it sits in the Seven Seas Lagoon! This is one of the smaller longhouses and it’s not too far from the Great Ceremonial House, but it is a long way from the Transportation and Ticket Center. It’s also right next to Luau Cove.

The rooms here are all 415 square feet. The north facing rooms are mostly Magic Kingdom views, but a few have Lagoon views. The south facing rooms have Standard views.

Rarotonga:  If you want to be close to the Great Ceremonial House, this is the long house for you. Located just to the east of the Great Ceremonial House, it’s also very close to the quiet pool, the laundry facilities, and Lilo’s Playhouse. The bus stop is just to the south. Rarotonga has the best location of all the longhouses at the Disney Polynesian Village Resort.

All of the rooms in Rarotonga are Standard view rooms and are 415 square feet each. There is a deck on the second floor that connects with the Niue longhouse.

Niue: The Niue longhouse is also one of the smaller longhouses at Disney’s Polynesian Village Resort, and is the only one without an elevator. (If you need an elevator you can go to Rarotonga and walk across the deck that connects with Niue.) There are 22 Standard view rooms in this longhouse that are 415 square feet each.

Niue has views of both the volcano and the quiet pools. It’s located just north of the Great Ceremonial House.

Samoa:  The Samoa longhouse is very popular because of its proximity to the pools, the Great Ceremonial House and the beach. If you get a first floor room on the Volcano Pool side, you can just sit on your patio instead of rushing to grab seats at the pool!

All of the rooms in Samoa are Standard view and are 415 square feet each.

The rooms in the Hawaii longhouse are the same size as the standard rooms (415 square feet). These Magic Kingdom view rooms are some of the most coveted on the property.

The Great Ceremonial House is a short walk away, and the beach and the pools are still close as well.

Tokelau:  The Tokelau longhouse is the largest of the longhouses at Disney’s Polynesian Village Resort. The rooms here are a little larger than the Standard rooms at 476 square feet. Rooms in Tokelau are Standard view, except for 2 Lagoon view rooms on the northeast end of the building.

Tokelau is centrally located, convenient to the Great Ceremonial House, the pools, the laundry, facilities and Lilo’s Playhouse.  Plus, it’s just a short walk to the Transportation and Ticket Center.

Tonga: The Tonga longhouse is one of the smallest longhouses. It’s also the most unique. Tonga is the home to all of the suites at the Polynesian Village Resort. Suites range from the small Honeymoon Suite (385 square feet) to the immense, 2-story, King Kamehameha Suite (1,863 square feet). Tonga is centrally located just outside of the Great Ceremonial House.

The suites all come with access to the King Kamehameha Club (concierge service). It includes help with trip planning, robes in the suite, and access to the lounge area, which has great snacks and drinks available.

Honeymoon Suite: The suite has a king bed and sleeps 2. It has a view of the marina and the Seven Seas Lagoon. No, you don’t get an automatic free upgrade if you’re celebrating your honeymoon here.

The Princess Suites sleep 6 to 10 guests and are all Lagoon Views.

Ambassador Suite: On the south side of the longhouse are two suites (one on each floor) called Ambassador Suites. Both are considered Garden view, but the view is not very good. These suites are huge. They have two bedrooms and a living room area. The lower suite has a back yard. Both suites have 3 full bathrooms.

Kamehameha Suite: The Kamehameha Suite is the suite of all the suites at Disney’s Polynesian Village Resort. This 2-story suite is over 1,850 square feet. It has 2 bedrooms, a living room, a kitchen, and 3 ½ bathrooms. You can add an Ambassador Suite and make a home away from home. This is the most expensive suite at the Polynesian and is favored by several celebrities.

Looking for a little more room and a little more luxury? Disney’s Polynesian Villas and Bungalows is one of the most exciting recent additions to Disney Vacation Club’s repertoire of properties.  A little slice of Bora Bora with a view of the Magic Kingdom is all yours when you stay in one of the stunning overwater bungalows!

The longhouses that are a part of Disney’s Polynesian Villas and Bungalows include Tokelau, Moorea, and Pago-Pago.

When it comes to dining, Disney’s Polynesian Village Resort just might have the best offerings of any WDW resort!  Thanks to many dishes inspired by Hawaiian flavors and island-style dining, all restaurants here—table service, character dining, quick-service, and even small snack locations—have incredible food and drink options.

Lava Pool: Easily identifiable as the resort’s main pool by its over 40-foot tall volcano, the Lava Pool offers a view of Cinderella Castle in the distance, a waterfall (off of the large volcano), has a waterslide inside that’s 142 feet long, a very well-themed splash area for your little ones (Kiki Tikis Splash Play Area), and an overall spectacular atmosphere (lively, but still allows for plenty of relaxation)

Oasis Pool: This pool offers a much more calm atmosphere (there aren’t any waterslides, and the pool is much smaller) — but the Oasis Bar & Grill is a huge perk to lounging here, as are the Oasis Patios (the large orange structures shown below, which can accommodate 6 guests each)

There are many activities for the whole family to enjoy here, including boat rentals, jogging trails, and even the ability to watch Happily Ever After from the beach.

Some of the most notable activities at Disney’s Polynesian Village Resort are:

Traveling around WDW, to and from Disney’s Polynesian Village Resort, is extremely convenient. Here’s an overview of the transportation options you have available here for each destination in WDW.

Disney’s Polynesian Village Resort is located in the Magic Kingdom Resort Area between the Transportation and Ticket Center and Disney’s Grand Floridian Resort & Spa. It’s just across the Seven Seas Lagoon from the Magic Kingdom and is a resort available on the Resort Monorail Line.