Maelstrom is “a High Seas Norwegian Adventure”. Yep, almost right, it is Norwegian, but I’m not really sure about the high seas or the adventure part

Tucked in the back of the Norway Pavilion this ride is the fastest ride in the World Showcase. You board a “Viking” ship and travel through the fjords of the old country and the North Sea of today. See some of the mythology of trolls and Vikings (no not the football playing type). 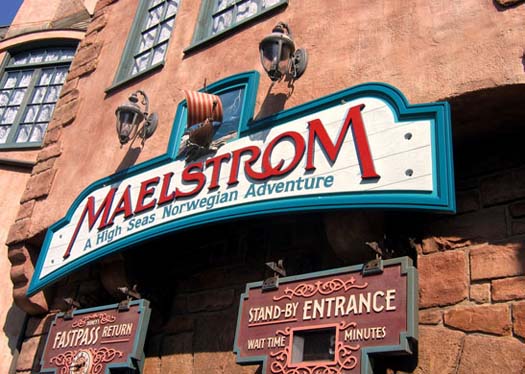 The entrance to Maelstrom is one of the most uncomfortable in all of Disney World. The area where you line up for the ride used to be spacious until Disney added a FastPass line. Now you can hardly walk through the queue area without bumping into someone.

There are big paintings on the walls that celebrate the heritage of Norway.

This is the most confusing ride in all Disney World. It doesn’t know if it wants tell the story of mythological trolls or talk about the current day realities of a oil platform on the North Sea. So it does a bad job at both.

After you leave the dock in your 4 person viking ship, you float immediately into the land of Norway’s past including spirits, trolls and Vikings. You start out looking at a bright light which, I suppose, is supposed to represent the Spirit of Norway or something.

You pass through scenes of ancient Norwegian villages and even a troll or two. One gets mad and blows your boat backward. After a couple more scenes you see a family of polar bears. (I still am not sure why they are there.)

Pretty soon you end up hanging over the crowds outside the attraction. Yes, the skies open up and your boat sticks out over the Norway Pavilion. Then it starts it trip back down into modern day Norway, Your boat tumbles into the North Sea where you see a working oil platform.

One word of caution, this ride breaks down more than some of the other Disney rides.

Once you finish the ride you exit onto the dock of a Norwegian fishing village. You then have to go through into a theater where a movie about Norway is shown. In fact you can’t actually leave the ride until the doors are opened to let the preceding out from the movie. Once the doors open you can walk through the theater and skip the movie. You might have to wait up to 5 minutes (the length of the video) before you can enter the theater.

By the way, the movie lasts longer than the ride.

This attraction first opened at Walt Disney World in July of 1988.

Maelstrom is not one of Dad’s favorite rides in Disney World. In fact it’s Dad’s second favorite ride in the World Showcase. (There are only 2.) Not only is the story confusing, but being held hostage waiting to get out at the end is really annoying.