Other Hotels on Disney Property

There are several non-Disney Hotels on Disney Property. They range from the beautiful Swan and Dolphin to the slightly hidden and little known hotel in an area inside Disney World that Disney let slip through the cracks.

The best known of the hotels are the Swan and Dolphin Hotels which are located outside of EPCOT. There are also the Disney Springs Hotels. These hotels were built with Disney’s blessing and cooperation. Let’s take a look at some of these Orlando hotels.

Swan and Dolphin are non-Disney Hotels on Disney Property 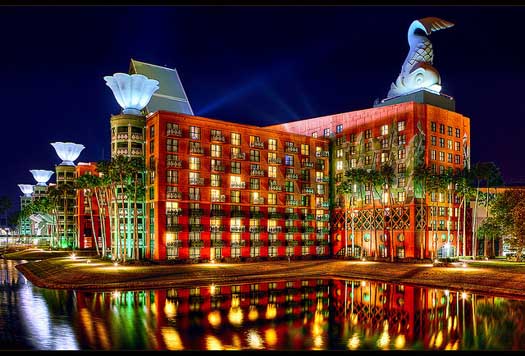 Photo by Jeff B.

Benefits of staying in non-Disney Hotels

As they say in some business, Location, Location, Location. Some of these hotels are located on some prime real estate. These are the closest non-Disney hotels to all of the Disney World parks. Most have access to Disney Transportation and the Hilton, the Swan and Dolphin guests are eligible for Extra Magic Hours.

The big benefit is saving money. Disney Resorts are overpriced compared to surrounding hotels. Orlando is one of the most competitive hotel markets in the world, and has some of the lowest prices. Except for the Disney hotels which are priced like they were in Washington DC. For example, currently the Disney Value Resorts lowest price is $82.00 per night. Compare that with the Disney Springs Hilton where you can get a room for $71.00 per night or less all year around. As one of my favorite move characters would say “it’s just not right.”

Probably the best known of the non-Disney Hotels on Disney Property are the Swan and Dolphin hotels. These hotels are owned and managed by Westin Hotels and Resorts. They were designed by world famous architect Michael Graves. Each resort has very distinctive sculptures on the roofs.

The Swan has 758 guest rooms and suites spread over a 12-story main building and two seven-story wings. The Dolphin is 27 stories tall and has 1,509 guest rooms.

The Swan and Dolphin are equivalent to the Disney Deluxe Resorts, but usually they are priced around the same as the Moderate Resorts. Another benefit, Westin is part of the Starwood hotel alliance and Starwood points can be used to for booking rooms. You will also earn Starwood rewards if you are a member.

The Disney Springs area has kinda been a bust. Originally Disney partnered with 7 hotel chains that built hotels on Disney property. Through the years, these hotels have gone through a lot of turmoil. Disney hasn’t quite known what to do with them. When they first were built, Disney didn’t have a lot of hotel rooms and extended many of the Disney hotel perks to the Disney Springs hotels.

As the years progressed and Disney added more hotel rooms, the need for these hotels diminished as did Disney’s support. Several of the hotels went out of business or changed ownership. Some even fell into disrepair (not something Disney wanted).

Over the last few years, the Disney Springs area has undergone some major renovation. Most of the hotels have been revitalized or remodeled. Here’s a list of the current Disney Springs hotels –

A few years ago, rumors started swirling that there was some land inside of Disney World that Disney didn’t own and that a hotel was being built right in the smack dab middle of Disney’s property without the consent of the Mouse. Those rumors turned out to be basically true. Apparently there was a tract of land that Uncle Walt couldn’t buy just east of EPCOT. It was purchased in 1962 by a mysterious landowner who held on to the property until he died in 1991.