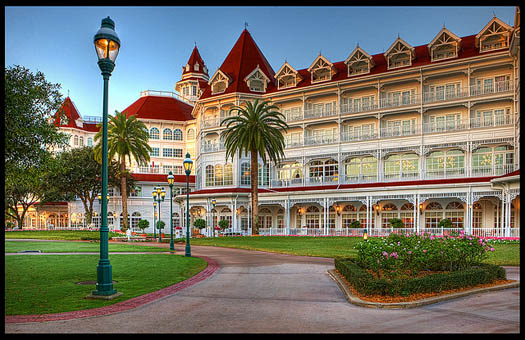 The resort is built in the style of the great railroad hotels in eastern Florida around the turn of the century when railroads were king.

Disney’s description of the hotel uses words like opulent, Victorian-style, gleaming white, gorgeous and marvel. Judge for yourself. If you don’t stay in the Grand Floridian Resort and Spa, at least take the resort monorail to the Magic Kingdom and jump off and see this world-class “architectural marvel”.

The lobby of the Grand Floridian Hotel is breathtaking. When you arrive on the monorail, you step off on the second of 5 floors. The first thing you notice is the size. This lobby is enormous. Take a few steps around to the right and descend the wide marble staircase onto the main floor.

Look up and see the 2 gigantic chandeliers. Listen to the live music playing from one of the upper floors. Walk around and check out the aviary. It really does take you back to a more elegant time. You might feel a little out of place in your shorts and t-shirt, but just look around, most guests are dressed just like you.

At Christmas time, the lobby really comes alive. Every year, the chefs at the restaurants build a 1,000 square foot house made entirely of gingerbread (yes, there is some wood to give some structure).

Your guest room at the Grand Floridian Hotel will be much like the rest of the hotel, elegant. The rooms are large, though not as large as the other monorail hotels. Most rooms have 2 queen beds and a day bed and sleep 5. The rooms are not as Disneyified as most of the other resorts. The rooms average around 440 square feet. 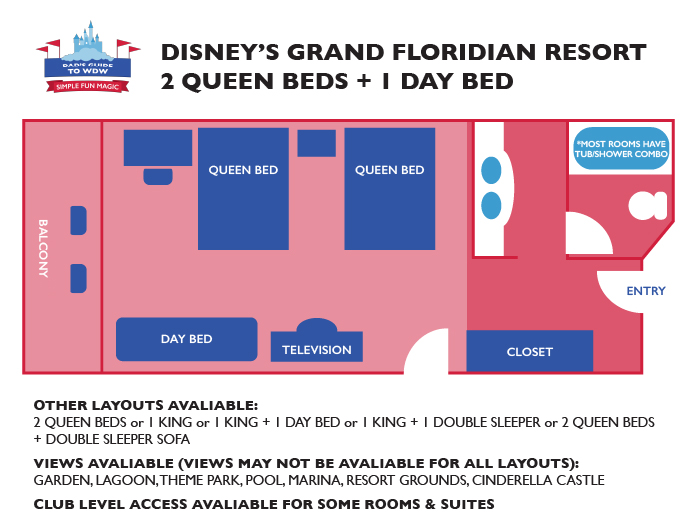 The 900 rooms are spread out over 6 buildings with names like Conch Key and Sago Cay (Key and Cay are pronounced the same, figure that one out).

Map of the Grand Floridian 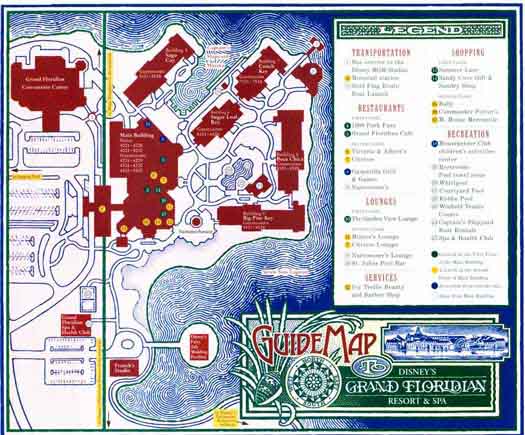 Guest at the Grand Floridian Resort stay in one of 6 buildings. You have the main resort which has several suites and guestrooms. Then there are the outer buildings which are named for islands off the coast of Florida. The outer buildings are – Boca Chica, Big Pine Key, Sugar Loaf Key, Conch Key and Sago Cay (Key and Cay are pronounced the same).

About the only difference in the rooms in each building is what you see out the windows.

Inside the rooms you’ll find classic Disney elegance. Rooms on average are 440 square feet. They are decorated in Victorian style with light colors through out the room. Rooms are accessed through interior halls. There are elevators in each building.

Below is a list of the furnishings in the rooms:

All rooms at all Disney Resorts are non-smoking.

There are some great views at the Grand Floridian Resort. The Views break down to Garden View which can mean a view of anything green, Lagoon View – you can see water and the Theme Park View – the Theme Park being the Magic Kingdom. Some of the different buildings have special views that are priced separately. You have the outer building vs the lodge and such. It gets confusing, but it boils down to the better the view the more you pay.

The Grand Floridian has more dining options than any other Disney hotel. You can get everything from snacks at Gasparilla Grill and games to a full AAA Five Diamond Award winning dinner at Victoria & Albert’s. There’s also seafood, a buffet, a cafe and Mediterranean style American food.

While not as busy as some of the other resorts, the Grand Floridian Hotel offers two beautiful pools, a marina, tennis, a health club, a one-mile jogging trail, an arcade,and a health spa. There is plenty to do around the resort.

Disney has one of the largest navies in the world and several of the boats in Disney’s navy are based. The marina has a catchy name. It’s called the marina.

Sea Raycers are the top sellers at the marina. These little boats are a blast when you take them out on Seven Seas Lagoon. (Check out Dad’s experience with Sea Raycers/Mouseboats) Sea Raycers are very affordable and are a great way to spend an hour.

Of course, being the Grand Floridian there must be a special boating experience. You can rent the Grand 1 Sea Ray Yacht for a truly magnificent experience. The Yacht can accommodate up to 13 guests and is great for a special fireworks show, or a special occasion like an engagement. The Yacht costs a whopping $400.00 plus dollars an hour.

For fishing during your DIsney World vacation, check out fishing on Bay Lake. Fishing at Disney World? Yes, Disney World has some great fishing. Check out the guided tours.

The marina also has pontoon boats, canopy boats and even sailboats for rent so you can take a nice leisurely trip around the lagoon.

The perfect Florida vacation. Sitting on a beach next to the deep blue ocean with a gently breeze wafting across your face as a nice young man brings you one of those drinks with an umbrella in it. It might not be a deep blue ocean, but you can sit out on the beach and imagine the sea breeze. The white sand beach is cleaner and whiter than any of the beaches on the coasts.

Each night, weather permitting, there is a campfire and movie held on the beach. Of course, it is a Disney movie. The campfire starts at 8:00 and the movie at 9:00.

Running on the beach is discouraged as is swimming in Seven Seas Lagoon. This is for your health reasons.

The Grand Floridian has 2 lighted CLAY tennis courts at the Tennis Center. Bring your own equipment or use the provided racquets. Guests can get private lessons by top instructors. In the afternoon, children ages 6-12 can join one of the Junior Tennis Clinics.

Gasparilla Grill and Games is the arcade in the resort. Like all the Disney arcades this one has some of the most popular arcade games that are a blast to play. You can grab a hamburger or hot dog while playing. It’s a kids paradise. (An adults paradise too.)

The official title of this resort is Disney’s Grand Floridian Resort & SPA. There is a World-Class health spa complete body treatments, therapies and massages for guests of all ages. Yep, even the younger folks have specially developed treatments designed to teach proper skin care.

Along with spa activities, there is a full health club with the latest in workout equipment. The Health Club is available to all resort guests at no additional charge.

You can spend a day (and a fortune) rejuvenating yourself after a couple days in the park. Reservations are required.

The Grand Floridian Resort is home to hundreds of weddings every year. Several years ago, Disney was getting lots of requests for weddings on property. So when the Grand Floridian was built Disney included a wedding chapel. Now Walt Disney World has become one of the top “wedding” destinations around.

Disney has a whole division set up to service weddings. You can get characters, time in the theme parks, and even a ride in a pumpkin shaped carriage. (If your willing to pay for it.)

Disney’s Wedding Pavilion is one of the top wedding destinations in the world. Up to 6 weddings are held every day. The chapel sits on an island in Seven Seas Lagoon. It has a beautiful view of Cinderella Castle right over the bride and grooms shoulders.

Disney has one of the world’s largest navies. Boats run on just about every body of water. There is a launch (small boat, see the picture above) that takes guests from the hotel to the Magic Kingdom. (At times this launch is shared with the Polynesian Village Resort and sometimes isn’t real efficient.)

The launches are a nice way to get to the Magic Kingdom.

Disney runs Luxury Motor Coaches (buses) from the Disney Grand Floridian Resort to Disney Hollywood Studios and Animal Kingdom. The also go to the two water parks, and Disney Springs from the hotel. Getting to other Disney World resorts can be difficult because you have to go to one of the theme parks and then change buses.

Or, the best way to get to another resort is go to the Magic Kingdom bus station and grab a bus there.

No, you can’t walk to the Magic Kingdom. It looks like you should be able to, but there is a canal that you can’t get across. You can walk to the Polynesian Village Resort but not anywhere else.

Dad always recommends a car when you visit Walt Disney World. Not because he makes money on reservations, but because it will help you get from point A to point B with a minimum of frustration (except for the Magic Kingdom).

Disney will now take you from the airport to the Resort and back. And it doesn’t cost you anything. Yes, that’s right it’s absolutely free. Just make reservations for DIsney’s Magical Express and let Disney do the driving.

The Grand Floridian is located just next to the Magic Kingdom as far north as you can go in Walt Disney World.

View Grand Floridian Resort and Spa in a larger map

Making reservations for the Grand Floridian is pretty simple. Just go over and let Dad’s partners at Destinations to Travel get you started. Before you know it, you’ll be sitting in the lap of luxury.

The Grand Floridian Resort is the flagship resort for many reasons, not the least of which is it’s just overwhelming. This is an upscale resort with guests in shorts and flip-flops running around. It’s one of the things that makes Disney World special.