Festival of the Lion King

The Festival of the Lion King is a high energy interpretation of the mega-hit movie called, oddly enough, “The Lion King.” As a member of the audience you even get to participate. Join a team and sing along.

It’s the Circle of Life, I Just can’t wait to be King, Hakuna Matata, Can You Feel the Love Tonight?, these are some of the great songs you here when you visit this attraction.

Opening of the Lion King Show 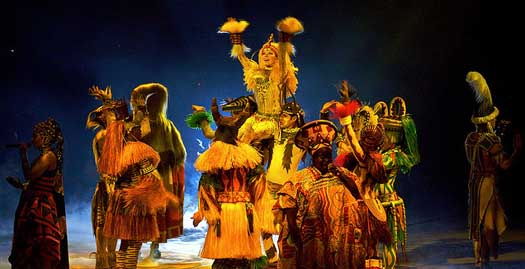 The Festival of the Lion King is in Animal Kingdom. It’s right where you’d expect to be (finally) in the all new Harambe Theater in the Africa section. 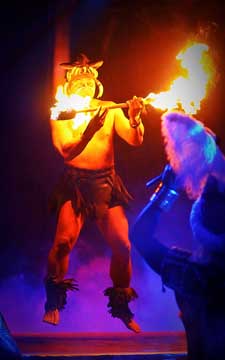 Disney has great preshows and this one is the most interactive in all of Walt Disney World. When you arrive in the theater, you are seated in a section of bleachers. Each section is assigned an animal.

There are 4 sections. The sections are Warthog, Elephant, Giraffe, and Lion. For each section there is a noise and a movement that looks and sounds like the animal from that section. (Don’t know what a Warthog sounds like? They will teach you.).

A contest ensues to choose the mightiest section. As the show begins you make your noise and do your movement at selected times. It’s fun to see how everyone gets involved.

This is a big show that tells the story of The Lion King in song, dance and acrobatics. The show starts out with a procession of performers, along with the king himself, who come in to the theater and actually put together the stage. Once the stage is set, the big show begins. It’s almost like an old three ring circus.

Through music featured in the film, high-energy dances, and even fire juggling, Disney characters Timon, Simba, Pumbaa, Rafiki, Zazu, Mufasa and more team up with a traveling band of “African tribal performers” to tell the tale of a lion cub who can’t wait to be king.

Here’s a video from the closing of the show

The Princess calls Festival of the Lion King her favorite show

This isn’t the story of the movie. There is no bad uncle but there is a lot of energy, great singing and fun.

This is a very good show. The monkeys are fun to watch (the Man-Child looks just like one of them). The singing is very good and you can join right in (Dad always does).

You don’t want to miss this one.