***Disney Wishes has been replaced by Happily Ever After***

Disney Wishes is the top nightly fireworks show at any theme park anywhere. (That’s Dad’s story and he’s stickin’ to it.) This 12 minute extravaganza is absolutely not to be missed.

Dad loves fireworks and Wishes is my favorite show in the world. Mrs. Mom gets tired of seeing it every night, but not Dad. I can’t wait to see it again.

It doesn’t get any better than this 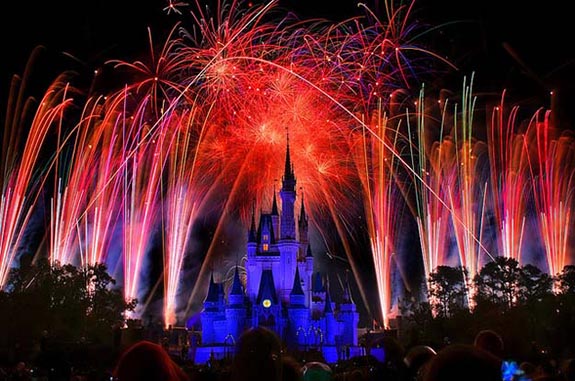 Almost every night, in the Magic Kingdom, just before closing time (or so), Uncle Walt’s boys say goodnight to their guests. As Ed Sullivan used to say, “We’ve got a really big shew for you tonight”. Disney Wishes is the way the Magic Kingdom ends the day.

Uncle Walt started using fireworks shows to keep guests in the parks later in the day. Walt noticed that guests were leaving Disneyland early in the evening. Disneyland suffered from no real drawing card in the evenings, so Uncle Walt and his boys designed Fantasy in the Sky with Sleeping Beauty Castle as a backdrop. It was so successful it lasted 32 years.

Disney Wishes uses Cinderella Castle as a backdrop to the story about how powerful Wishes can be. 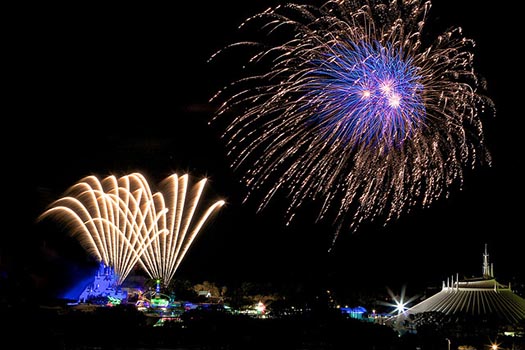 Jiminy Cricket and the Blue Fairy lead guests through wishes of good and evil and of love. Several Disney characters including some of the villains make appearances. Some of the characters are Peter Pan, Ariel, Aladdin, Cinderella and Jiminy’s good friend Pinocchio. The villains are led by the Evil Queen from Snow White, but in the end Good wins (hey, it’s Disney) and all is right with the world.

Star Light, Star Bright…
First Star I see tonight…
I wish I may, I wish I might…
Have the wish I wish tonight…

The simple song that’s sung comes from the poem Starlight, Starbright. It’s addictive. You’ll be singing it out loud. (Dad does, it freaks people out, because even though Dad is a 50ish year old man, he can sound just like that little girl. Dad sings good. Either that or he has a good imagination.)

In 2004 Disney introduced a totally new technology for shooting off fireworks. It allowed Disney to better control where their shells went. They now use compressed air to fire shells into the air. This is good for Disney and good for the environment. It also cuts down on the smoke.

Hallowishes from Mickey’s Not So Scary Halloween Party 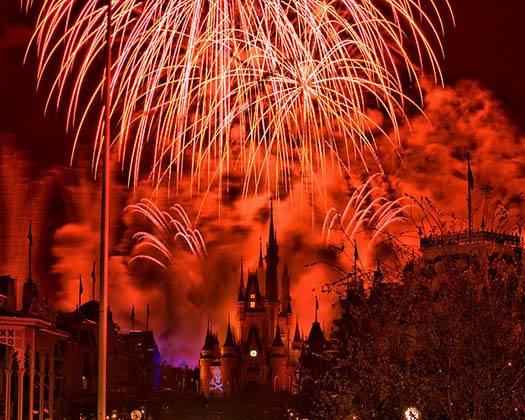 Disney has 2 special holiday shows. For the months of September and October there’s Happy HalloWishes during Mickey’s Not So Scary Halloween Party. During Mickey’s Very Merry Christmas Party you can see Holiday Wishes.

One of the spectacular ways Disney celebrates is with the fireworks shows. Disney Wishes has special shows for the fourth of July and for New Years Day. These special shows are some of the most spectacular displays anywhere. 500,000 people are rumored to be in the vicinity of the Magic Kingdom every New Years Eve. That’s a bunch of folks. 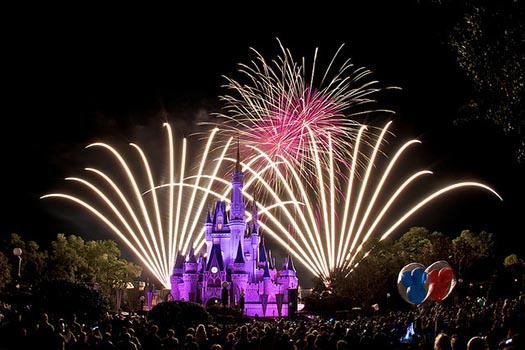 Where to Watch the Show

You can watch Disney Wishes from just about anywhere, but the show was designed to be seen from Main Street. When you watch from Main Street, you see the fireworks burst directly over the castle. It’s just pretty awesome.

The absolute best place to watch is from the platform at the Train Station, but it may be reserved for VIP’s only (lately there has been some talk about the music not being played up here anymore). Dad and family usually try to watch from Casey’s Corner. Go early, grab a table and fight the birds and other guests. It’s worth it.

Another place Dad likes to watch from is the beach at the Polynesian Resort. Go just behind the Volcano pool, set up a lawn chair and wait. Disney pipes in the music and it’s a great view. (The music is played all the way down to the volleyball court.)

Last year, Disney started the “Tomorrowland Terrace Firework Dessert Party”. Desserts are served at the Tomorrowland Terrace Restaurant where you can watch the big show. This is a special ticket event which costs over $20.00 per adult and $11.00 per child. You have to have a ticket to get a seat. This used to be one of the prime locations to watch Disney Wishes. 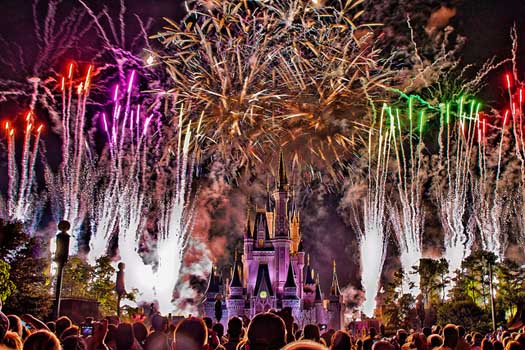 The nightly Disney Wishes show draws a huge crowd. Main Street will be packed and then some. You have to grab a spot early if you want one of the prime locations. Touringplans.com can help you avoid crowds and find a great place to watch the show.

Never one to miss an opportunity to sell something, a few years ago, Disney started selling cruises on Seven Seas Lagoon to watch Wishes. What a novel concept. Now you can even have a dinner-fireworks cruise complete with an on-board chef. (For a very nominal fee, oops I mean for a very outrageous fee.)

Warning – watching this video could cost you a lot of money

Now, since you’re all primed and ready, if you would like to get Dad’s crew over at Destinations to Travel working on your next Walt Disney World Vacation just bop over and fill out the form today. Before you know it you’ll be enjoying the vacation of a lifetime at Walt Disney World.

Disney is the largest user of fireworks in the world. They put them to good use. Everyone should see this show. If your children are afraid of loud noises, watch from the Polynesian, you can’t hear the big bangs from there.