Where not to buy Disney World discount tickets

Buying Disney World discount tickets is risky. You must know what you are doing. Every year hundreds of people get ripped when they buy Disney World tickets at a discount.

Here are some ways you can get ripped off when looking for tickets.

First is the convience stores around Walt DisneyWorld. Dad spent a couple of weeks working in Orlando. There are several places around Disney World that “sell Disney World discount tickets”. 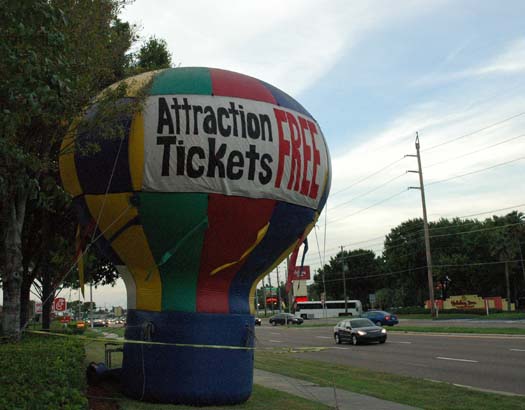 I’m not saying you can’t buy tickets off of Ebay or Craigslist… Well, Yes I Am. Don’t do it.

You should NEVER buy partially used tickets unless you just want to throw your money away. A lot of the gas stations and corner shops around Disney World have booths that will sell you “partially” used tickets to the parks. Don’t do it.

There are some real good reasons you should not buy partially used passes to Disney World.

Dad’s about to sing again …

Disney doesn’t usually try to put people in jail for using tickets that they didn’t purchase, but, they will bar you from entering the parks.

Web sites (like one called All World Ticketing) are beginning to pop up with a new “scam”. They offer to sell you discount Disney World discount tickets for up to 50% off of Disney prices. (Sounds real good.) There is even a guy, usually named Jack, who will meet you at the ticket booth and give you a code for your tickets. You go to the ticket booth, buy your ticket and then after you get the ticket you give Jack the money (cash). What could possibly go wrong?

Dad’s heard that All World Ticketing is out of business or has changed names. Be careful. There are others running the same scam.

Here is another scam. (This one should set off alarm bells for lots of reasons) You reserve your tickets and meet someone in a parking lot and give them the money and they give you tickets. DON’T DO IT!

Dad recommends you buy your tickets from AUTHORIZED Disney ticket reseller or Disney itself. Dad’s favorite ticket broker is the Official Ticket Center. They have great prices and have been around for ever. (OK, not forever, but for a long, long time.) They are an AUTHORIZED Disney Ticket Reseller.

How to be keep your tickets safe

Here’s a bit of advice with any Disney World Ticket.

If your park ticket gets lost or stolen or just quits working and you need a replacement you can go to Guest Services and get a new one. However, sometimes (it’s supposed to be all the time) you are asked to provide the credit card that purchased the ticket (unless you purchased from an authorized Disney Ticket seller). If you don’t have that card your ticket will not be replaced. Oops. Bad juju. So…

Don’t ever buy from anyone that doesn’t accept credit cards. (That goes for just about anything these days.) Most scams artists only take cash or money orders. They are a lot harder to track. Don’t buy any ticket that seems to be a really great deal.

If you totally ignore Dad’s advice and decide to meet someone and buy tickets, take their picture. Ask for a copy of their Florida Tax ID (if they don’t collect sales tax it’s a scam). Take video of your transaction and if everything works out send me a note with pictures and video and I’ll eat my hat.

When it comes to buying Disney World Discount Tickets on the internet (or in person), use some common sense.

If a deal sounds too good to be true, run and hide!!!