“But what if Andy gets another dinosaur, a mean one? I just don’t think I could take that kind of rejection.” – Rex

Well, Rex, if you don’t like competition, T-Rex Cafe in Disney Springs might not be for you. 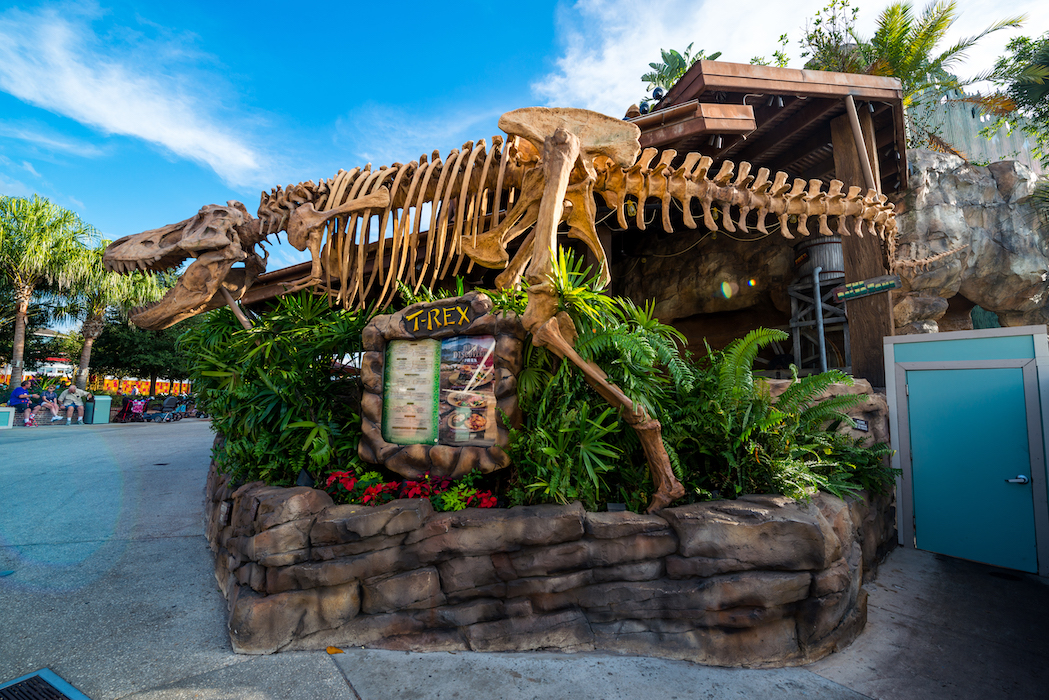 A giant T-Rex greets you outside the entrance. Photo by Cliff Wang

This place is about dinosaurs, dinosaurs, and more dinosaurs. While you’ll find something you like on the menu, you don’t come to T-Rex Cafe for the food, you come for the dinosaurs! More than likely, if you are planning to visit, you have someone in your group who is a huge fan of prehistoric lizards!

If your kiddos love the ride Dinosaur at Disney’s Animal Kingdom, the T-Rex Cafe wil be right up their alley! If they want to have lunch with a T-Rex, this is about as close as they can get. 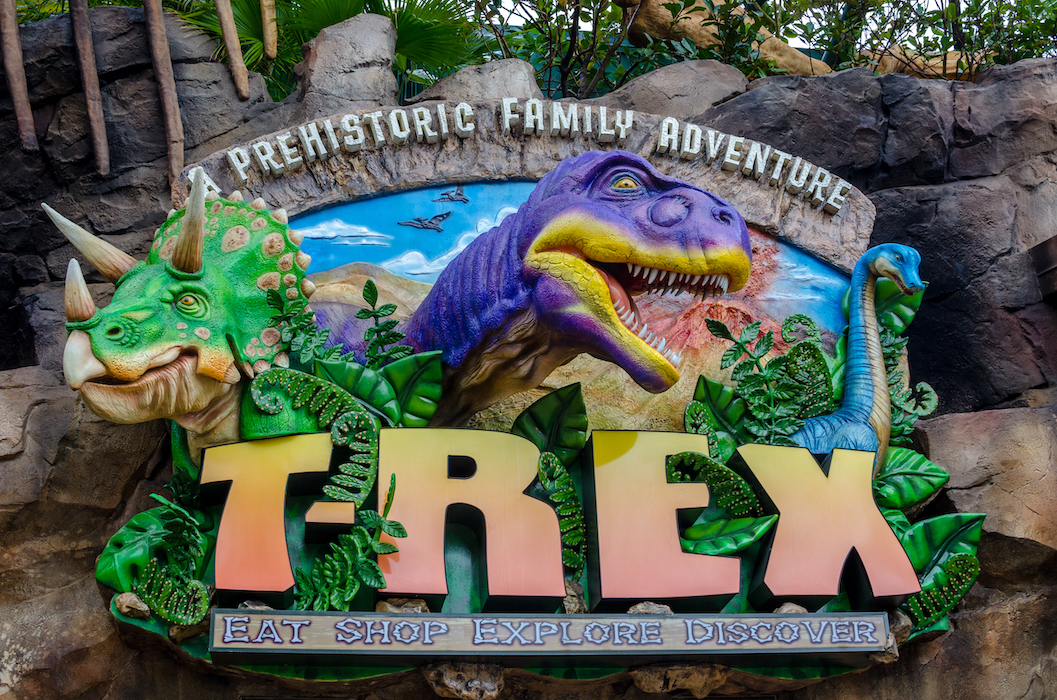 Come to T-Rex for "a prehistoric family adventure!" Photo by Cliff Wang

If you’ve ever been to the Rainforest Cafe then you know what to expect here. T-Rex Cafe is incredibly detailed with Dinosaurs and other prehistoric creatures. These creatures are animatronic so they move around during your meal. Every so often there is a meteor shower (Think the thunderstorm at Rainforest Cafe) and things can get pretty loud.

In fact, the meteor shower might frighten some of the younger ones in your group, so keep that in mind before planning an expedition to T-Rex Cafe.

One really cool thing in the restaurant is the Ice Cave. It looks exactly like it sounds, a cave made of ice (but not real ice, this is Orlando, and that wouldn’t go well. Right, Olaf?). During the meteor shower, the Ice Cave changes colors and it’s just a really cool vibe.

T-Rex Cafe is also more than just a place to get some prehistoric grub. You can also visit the Paleo Zone and dig for dinosaur bones, and pan for treasure. Kids will have a great time!

If those options aren’t enough, there’s also a Build-A-Dino store. It’s operated by Build-A-Bear-Workshop. Kids (or anyone) can build their own stuffed souvenir!

Another way T-Rex Cafe is like Rainforest Cafe is that it has a large gift shop where you can purchase prehistoric items. Your little paleontologists will definitely want to look around!

There’s a reason that T-Rex Cafe is so similar to the Rainforest Cafe. They are both owned by Landrys. Because of this, if you are a member of Landry’s Select you can use your card here and earn and redeem points. Best of all, you can use the priority seating perk and get a table even without a reservation! That’ll add a bit of Simple, Fun, and Magic to your night! 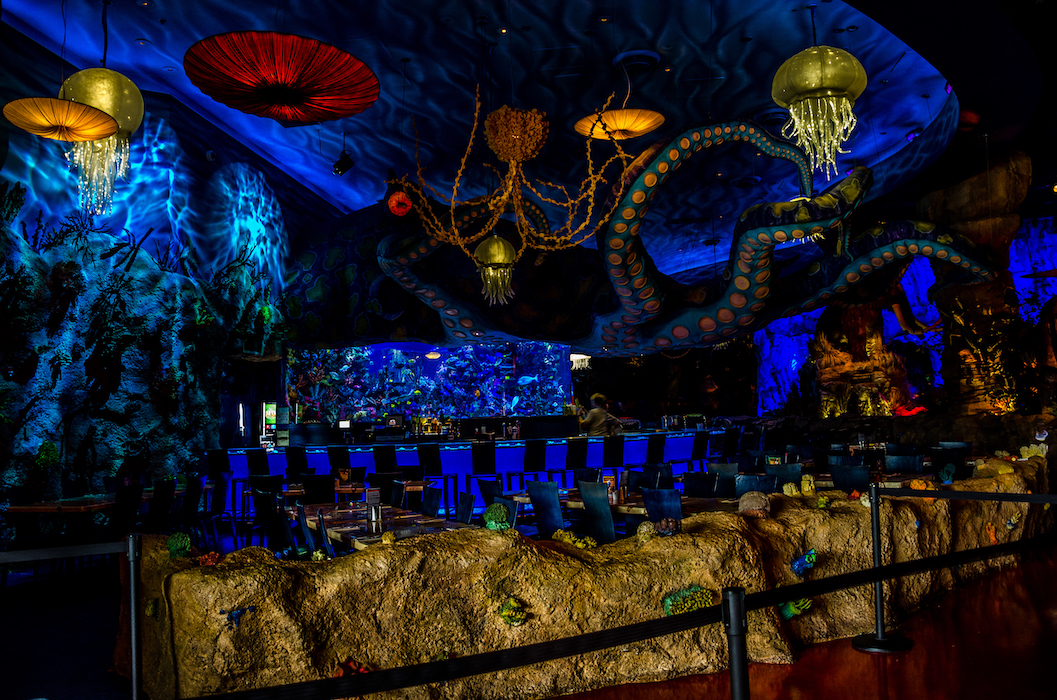 Inside, you’ll find all sorts of creatures will be joining you while you dine. Photo by Cliff Wang

T-Rex Cafe is located in the Marketplace at Disney Springs. It is near B.B. Wolf’s Sausage Company, and just across the bridge from Paddlefish. You can’t miss the giant dinosaur skeleton by the entrance!

So you’re traveling to prehistoric times during lunch, the lunch menu will be the guide you need! 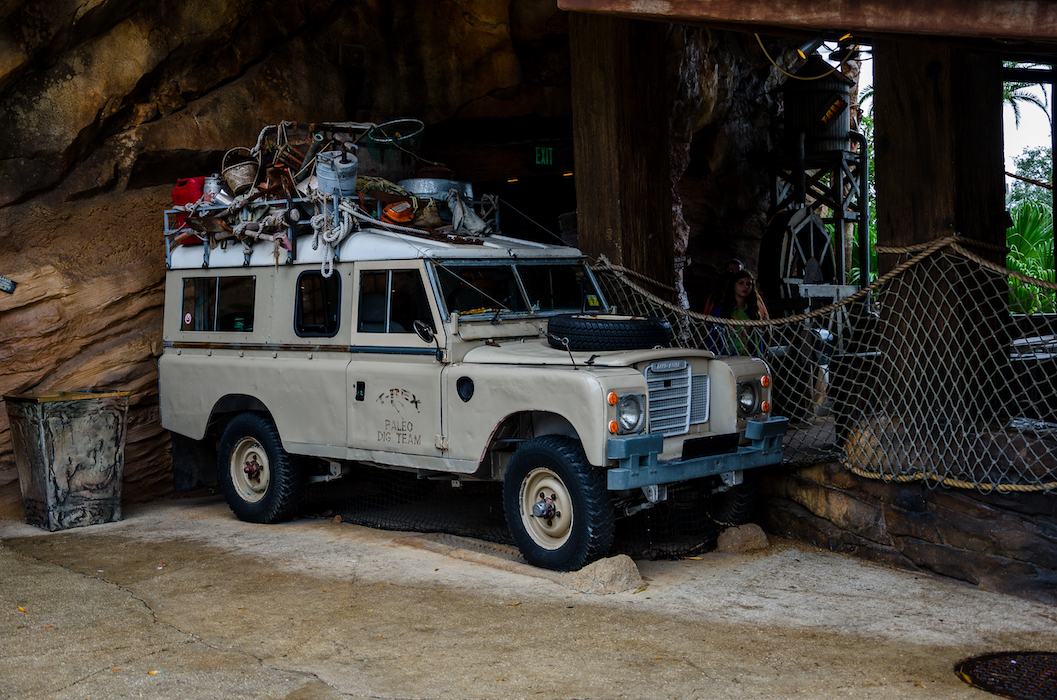 A T-Rex Paleo Dig Team vehicle is parked outside the restaurant. Photo by Cliff Wang

If you’re venturing out in the evening, here is the dinner menu. 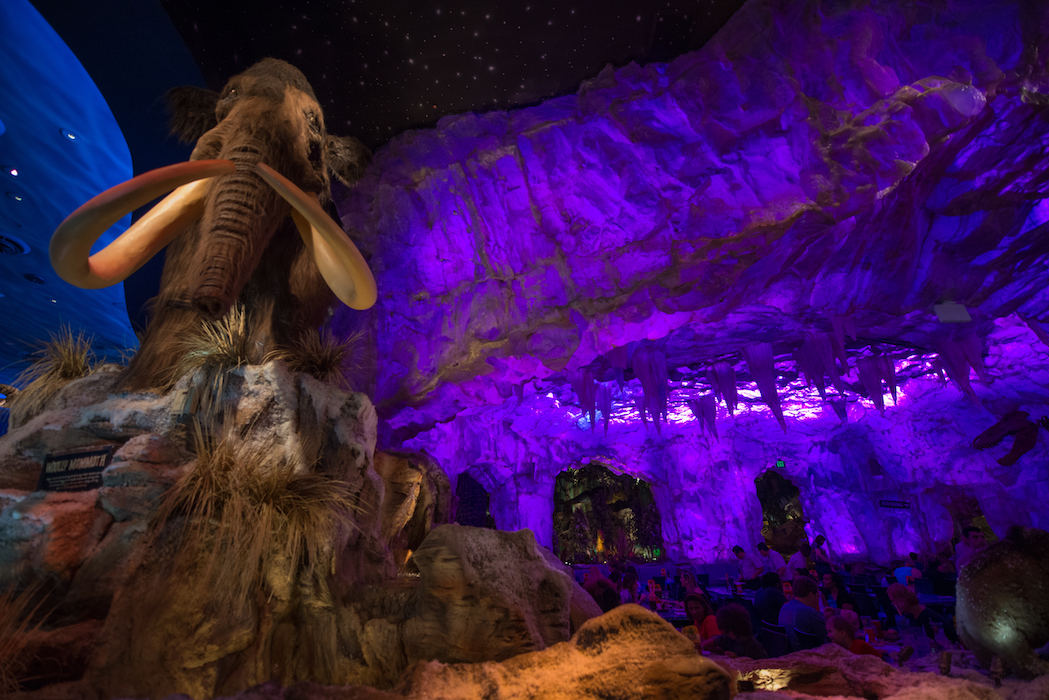 Be sure to find the Woolly Mammoth! Photo by Cliff Wang

Unless you have your Landry’s Select card handy, you’ll want to make an ADR. There’s a lot of people who want to see the dinosaurs at T-Rex Cafe, so don’t take a chance.

T-Rex Cafe costs one table service credit on the DDP. 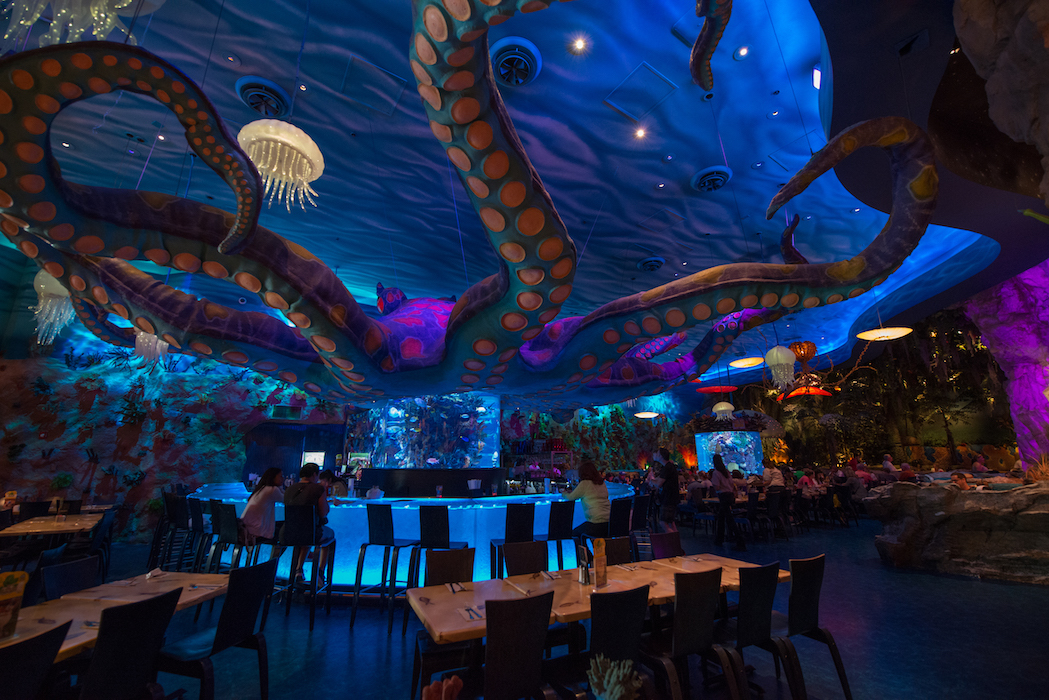 Check out the bar area for a fishy scene complete with real fish! Photo by Cliff Wang

When you enter the restaurant, look over at the bar. You can’t miss it, there’s a giant octopus hovering above it. On the Octopus, you’ll find a hidden Mickey!

Traveling and dining in the prehistoric period can be overwhelming to the average traveler. Our friends at Destinations to Travel know their way around and can take all the stress out of your travel — even travel to pre-historic times! Trust me!

Anyone who loves dinosaurs is going to love this place! While this isn’t award winning food, it all tastes fine! You’re not here for the food anyway!