Toy Story Pizza Planet has one of the best meal deals in all of Disney World. It’s also a great place for Dad and Mom to sit down for a while while the kids blow off a little steam (and a little money) in the arcade. 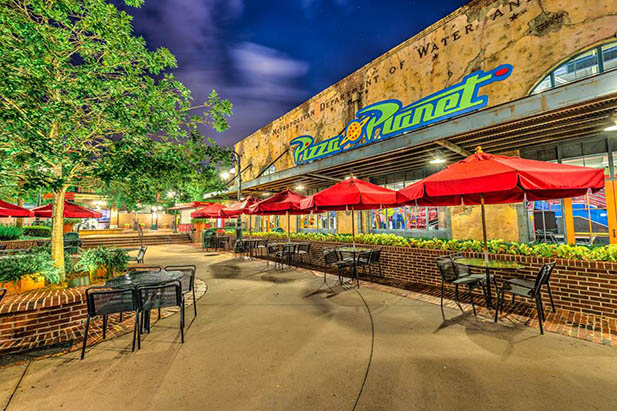 This is one of the simplest menus in all of Disney World it’s individual sized pizzas and salads. There is a garden salad or a Toy Story salad (which is a fancy “chefs” salad). Pizza comes in three varieties, cheese, pepperoni and veggie. There are potato chips, cookies and rice crispy treats and the standard drink choices. That’s the whole menu.

You can order one of the meal deals. Most restaurants, when they package a meal deal, you can’t figure out if it will save you money or not. There is no doubt with the meal deals here. For example a cheese pizza costs $7.99, but if you order Buzz’s Meal Deal you get a cheese pizza and garden salad for $7.79. Yes, that’s not a typo, the meal deal with a salad is cheaper than just the pizza.

The arcade area is modeled after the arcade from the original Toy Story movie. Andy (the real kid from the movie) used to love to hang out at the arcade. One of the scenes in the movie shows Andy playing in the arcade (the one with the little green men). This 2 story building is crammed full of games. You can buy tokens at token machines scattered around the building.

This is one of Dad’s favorite places to eat in Disney World. You get a good meal for a good price and who doesn’t like pizza? The arcade games are a big bonus.