Located on the second floor of the Grand Floridian are a pair of elegant doors behind which is the hidden, and often daunting, world of fine dining ‘extraordinaire’ at Walt Disney World.  I say daunting because so many people discount experiencing this ultimate dining event because they think it is too formal or posh, requiring a jacket for men and cocktail wear for women. I have heard people say that they would feel uncomfortable in the rarefied atmosphere and wouldn’t enjoy the meal, as it is too fancy. 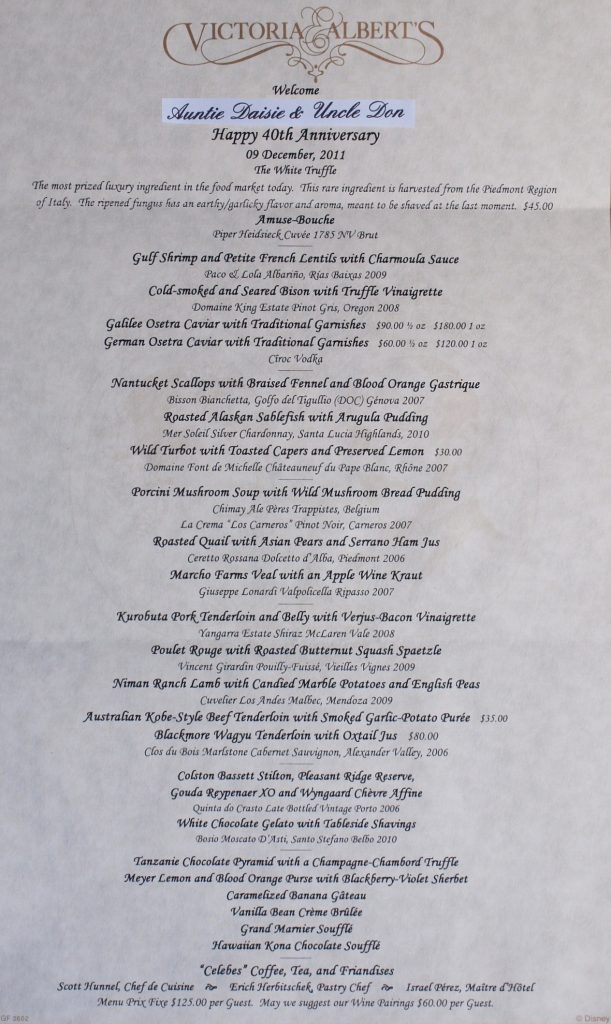 Here was our menu

It is true that there is a dress code but it is not black tie (unless you want to wear that), Uncle Don wore a navy blue sports jacket, shirt and tie and a smart pair of chinos.  I packed black pants and a non-iron evening top, ballet flats and wore a bit more lipstick. The meal was so subtle and flavorful that despite the fancy descriptions it was just yummy, beautifully cooked, fresh food on gorgeous plates.

We attended Victoria & Albert’s last December to celebrate our 40th Wedding anniversary. We opted for the Main Dining Room at the fixed price of $125.00 per person. Having our anniversary photograph taken in front of the magnificent Christmas tree in the foyer was a delightful start to the evening.

The cast members seemed so happy to be working in such a spectacular resturant and they were genuinely interested in us having a wonderful meal, showcasing Chef Scott Hunnel’s creations and the skill of the culinary team. They want people to be blown away by the food and whole experience. At no time were they snobbish or superior because it was our first (and potentially our only) experience at Victoria & Albert’s.

On the menu, additional cost items are listed and we were asked if we would like to try the seasonal appetizer of oysters, which we declined, as I thought the included menu was more than ample, and it really was.

With two of us ordering a different item from each of the 6 included courses, together with the Amuse-Bouche (a complimentary tasting plate brought out first) which consisted of 4 different ‘tastes’, the 3 breads with different butters (each like another course), by the time we reached coffee, we had both sampled 19 different taste and sight sensations.

Only Uncle Don had the wine parings which were generous, to say the least. I am a water drinker but there was no hint of disappointment on the part of the sommelier (I only know that word because I learned it that night) that I would not be partaking of his wine expertise. The service seemed like a finely rehearsed ballet with the dancers moving around us gracefully, graciously attending to our need and wants.

The food was so delicious, and getting to taste each other’s choices extended the pleasure. Of course, by coffee I couldn’t eat another bite but when the time came to depart, not only was there a beautiful rose for me, but also an elegant goodie bag containing our personalised Menus, a box of handmade chocolates and a delectable cake all packaged beautifully.

The meal cost $250.00; the wine paring $60.00 which came to $310.00 plus 6.5% tax. The bill total was $330.15. We left $400.00 (approximately 22.5% tip) and considered it worth every penny. How many times at WDW do you tip 18% at a buffet meal, Bibbity Bobbity Boutique or countless other tipping situations for ordinary service because it is expected? This was real service genuinely given by professional food experts and nothing was a trouble to them.

My Luxury for Less Tip:

Of course, the other options of the Queen Victoria Room or the Chef’s Table would have been more expensive but honestly Victoria and Albert’s Dining Room was lovely. Also, there was no need to choose any of the additional cost items on the standard menu and the cast members were obliging when these items were declined. If you are not a big drinker don’t be pressured into getting a wine paring for each person if you only have the occasional sip.

The presentation, service, table appointments, food and wine, all experienced to the lilting sounds of the harp, left nothing to be desired. Two and a half hours passed seamlessly as if we were part of a culinary art installation. It was so much more than a meal.

This is definitely one for the ‘bucket list’, a ‘once in a lifetime’ experience to be savoured and remembered. Truly wonderful! Save your pennies, no matter how long it takes, and spend them here………it is not to be missed and definitely worth the money.