The Great Movie Ride closed permanently on August 13, 2017 to make way for a brand new attraction – Mickey and Minnie’s Runaway Railway. Set to open in 2019, we will provide details once they have been released.

The Great Movie Ride at Disney World Hollywood Studios is a ride that has great scenes from great movies. OK, enough sarcasm, if you like old movies this ride is for you.

There are some beautiful scenes, some suspense and even a big surprise. 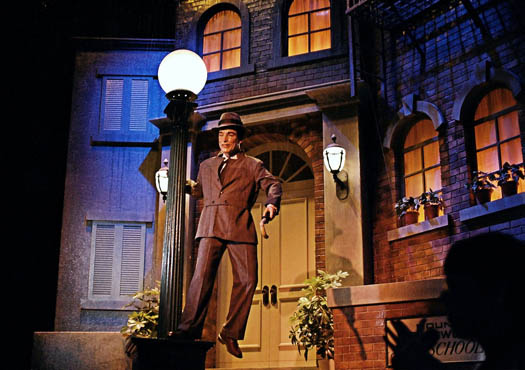 Disney has great preshows and this attraction has the best in all of Disney World. When you walk into The Chinese Theater you walk into history. The history of great movies. In the first queue there are famous props from several big movies. These props change from time to time. Next you walk through the pre-show theater where trailers from various movies are shown. (Dad says they need more movies in the queue to The Great Movie Ride.)

This ride is pretty simple. Get in a big theater like moving platform and ride through scenes from big time moves from years ago. There is a lame little interaction where your moving platform gets hijacked by a bad guy, but all turns out fine.

You enter the ride under the original 1930’s Hollywoodland Sign theater marquee. Along the way you see audio-animatronic stars from great movies like "Singing in the Rain" and "Mary Poppins" and that’s just the start.

The movies are grouped together in similar genres. The first group is musicals followed by gangster movies then comes westerns, sacrifice (including Raiders of the Lost Ark) finally horror movies are represented. A jumble of movies like Casablanca, Fantasia, and The Wizard of Oz finish up the scene portion. Your ride vehicle then stops in front of another screen where you see classic scenes from classic movies.

Check out the video of the Wizard of Oz scene.

This attraction first opened in May of 1989.

This is not one of Dad’s favorite ride, I’m not much of a movie buff, but Mrs. Mom is and she loves this ride.