I have to admit, since 1977, I have been enthralled by Star Wars. The time I first saw “A long time ago in a galaxy far, far away“, I was hooked. I’ve dreamed of living in that galaxy ever since. Now I can, because on August 29, 2019, Star Wars: Galaxy’s Edge – Disney’s BEST. LAND. EVER. opened at Disney’s Hollywood Studios!

When Disney first announced Galaxy’s Edge they said it was going to be their largest, most ambitious, technological, and immersive land ever. They weren’t wrong. Welcome to a galaxy far, far away. 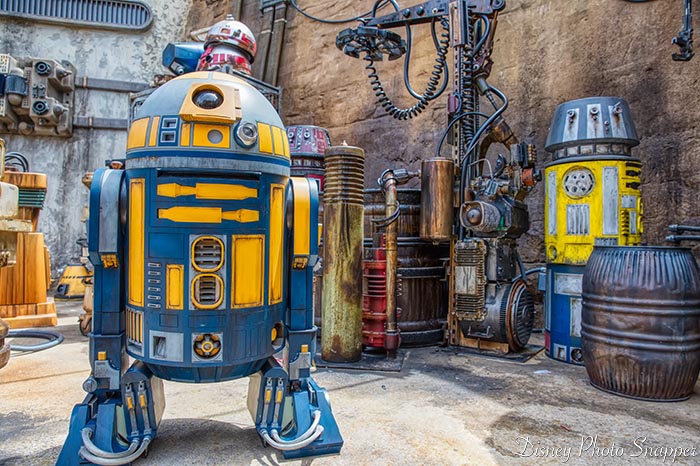 The details, like these droids, are incredible and so lifelike – photo by Brett Svenson 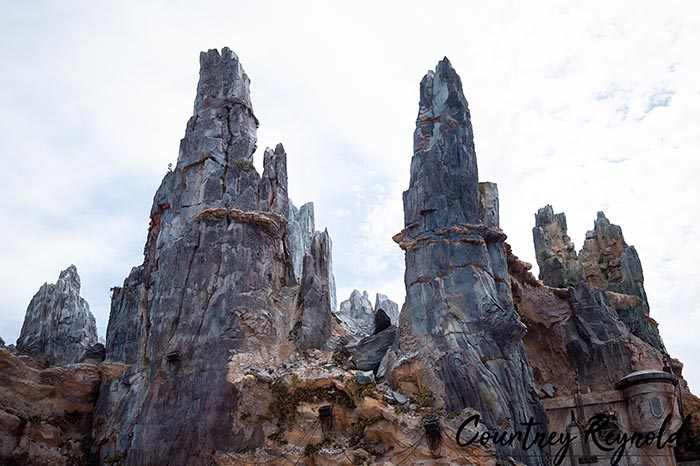 Disney calls the land Star Wars: Galaxy’s Edge, but the base you are in is called Black Spire Outpost. The name Black Spire comes from the big, foreboding spires that overlook Galaxy’s Edge.

Black Spire Outpost is the largest settlement on the planet Batuu, which is the last stop before the Outer Rim and Wild Space. It’s home to some of the most notorious and colorful characters in all of the galaxy.

There are only 2 attractions in Galaxy’s Edge, but they are INCREDIBLE. Rise of the Resistance is the best attraction Disney has ever created. Both attractions are more than rides, they are experiences. 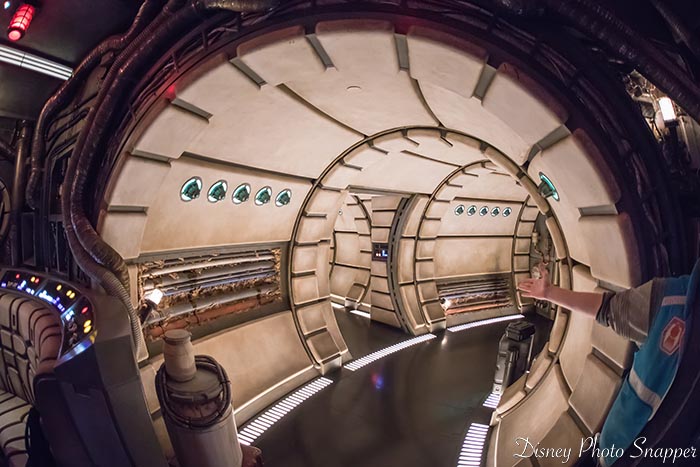 Get ready to fly the Falcon, “I’ve got a bad feeling about this” – photo by Brett Svenson

What? I get to pilot the Millennium Falcon? I’ve always wanted to sit in that seat. No, those aren’t tears, my eyes are just watering from the dust on this hunk of junk.

Millennium Falcon: Smugglers Run was the first attraction in Star Wars: Galaxy’s Edge. Wow. Not only can you walk through the fastest hunk of junk in the galaxy, you can sit at the table where Luke and Chewbacca played Dejarik (the chess like game), you can actually walk into the cockpit and sit down in Han or Chewie’s chair. The ship takes off and YOU are the pilots of the Millennium Falcon.

Your eyes will water too.

Star Wars: Rise of the Resistance 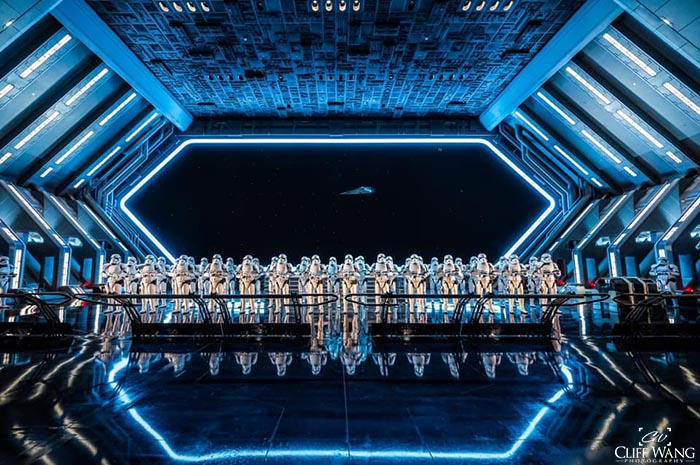 Star Wars: Rise of the Resistance is 18 minutes of immersion into the story of Star Wars. It’s more than a show. It’s more than a ride, it’s an experience, and even that word is not sufficient. Rise of the Resistance is truly something different than Disney has ever created. It’s so different Disney came up with its own version of FastPass just for it.

Dad’s Rise of the Resistance page

The Food and Drink

The food and drink in Galaxy’s Edge is part of the immersive experience. It’s meant to seem “galactic”. Food looks funky and in a lot of cases it tastes funky. 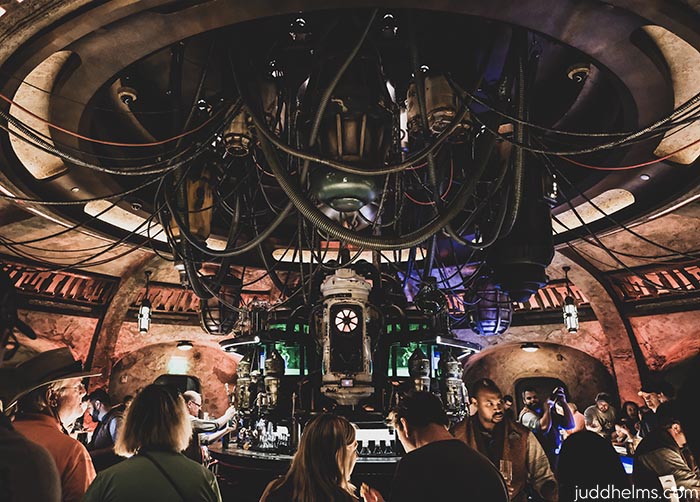 Welcome to Oga’s Cantina. Grab a drink and relax – photo by Judd Helms

Oga’s Cantina looks an awful lot like the cantina that Luke and Obi Wan went into in the very first movie (not movie #1, but the 1977 movie). You almost expect to see Han talking to a bounty hunter or Chewy in the corner booth.

The cantina offers a vast variety of adult beverages. Some are “other worldly”. There’s also the normal Coke products and even a food menu with a few offerings. 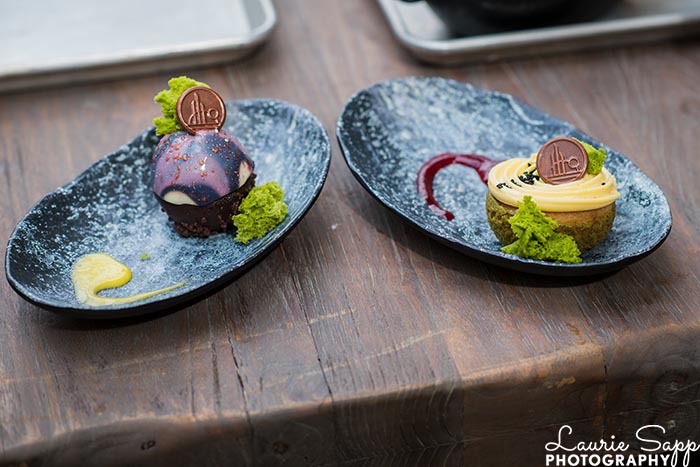 Looking for an interesting dessert? Check out Docking Bay 7 – photo by Laurie Sapp

Docking Bay 7 Food and Cargo is the primary restaurant in Star Wars: Galaxy’s Edge. It’s located is a cargo hanger that has a restaurant inside. Chef Strono “Cookie” Tuggs has roamed the galaxy looking for foods that will delight.

This is a quick service restaurant has menu items with names like:

They’ve taken some well known Earth dishes and “Star Wars”ed them up.

Unlike some of the Star Wars movies, you won’t find animals roasting on a spit on the streets of Black Spire Outpost. That being said, there are a few places to get some “interesting” food and drink. 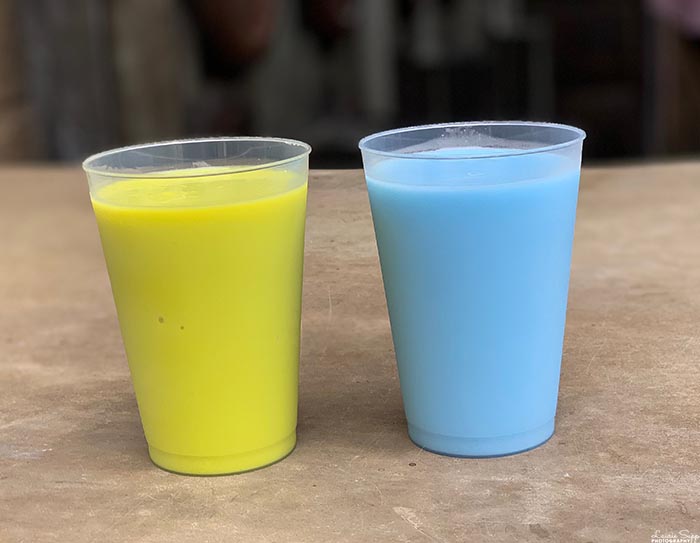 Have you ever wanted to try Blue Milk? How about Yellow Milk? Which is better? – photo by Laurie Sapp

Those are some semi-appropriate quotes from commercials long ago which might or might not apply to the Milk Stand in Star Wars: Galaxy’s Edge. The idea of the Milk Stand comes from Star Wars movies. In A New Hope, Luke drinks Blue Milk and in The Last Jedi, he drinks Green Milk.

Now you can taste these frosty (they are served very cold) creations to see what you think. WARNING: They don’t taste at all like milk. 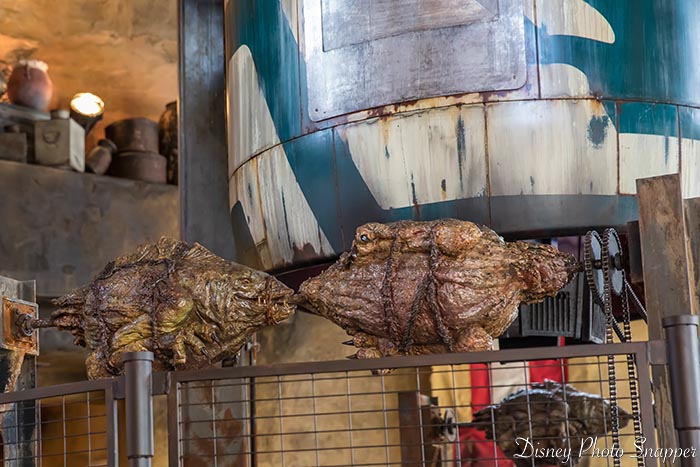 No, we don’t eat the Ronto sides, but it does look interesting – photo by Brett Svenson

This is the place you’d expect to see animals roasting on a spit, but not so much. You will smell roasting meat, but it’s very earthly meat. Ronto Roasters features chicken and pork wraps, Turkey Jerky and an interesting non-alcoholic beverage called a Tatooine Sunset.

Yes, that is a pod racer engine and a droid tending the spit turning the side of Ronto (a large beast native to Batuu). I wonder what Ronto tastes like? 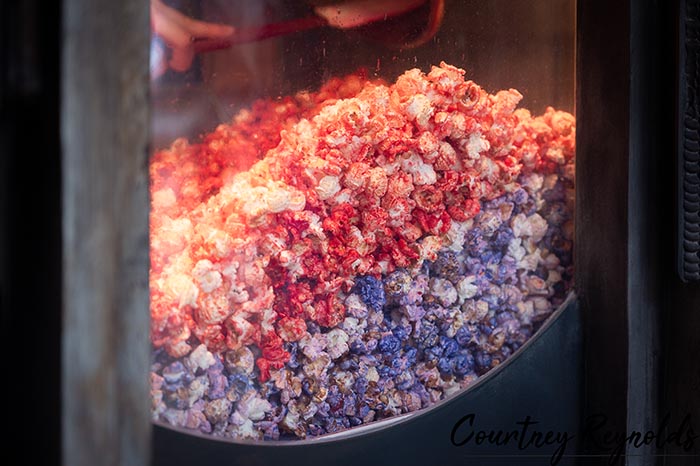 Not only is it tasty, it’s colorful – photo by Courtney Reynolds

How about a really unique snack? Pop in to Kat Saka’s Kettle for some Outpost Popcorn Mix. The popcorn is a mix of sweet and sour flavors.

Kat’s is located in the middle of the marketplace. Check it out. 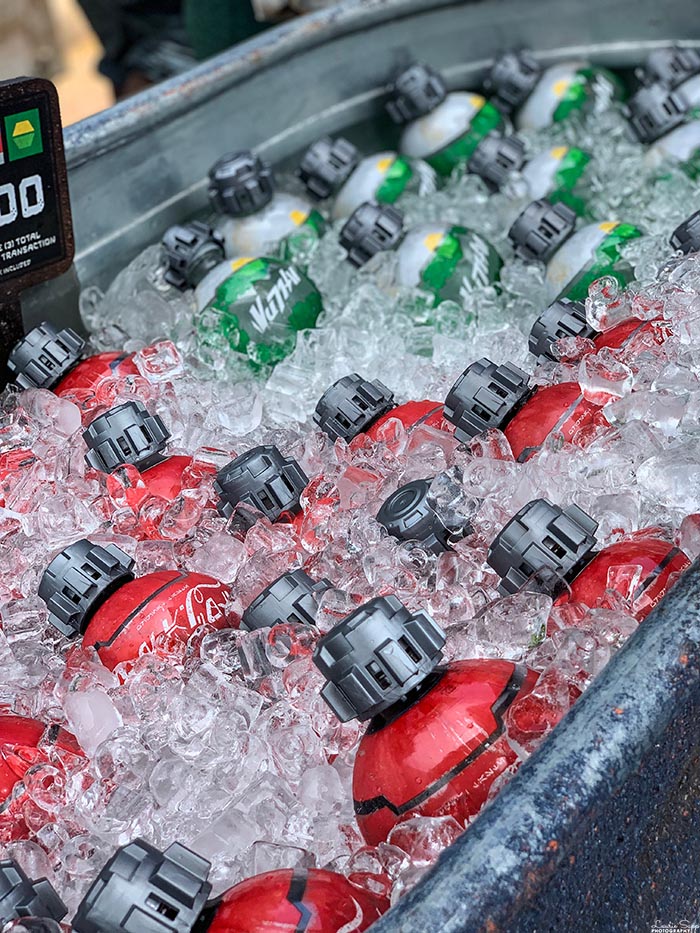 The Thermal Detonator idea is so cute – photo by Laurie Sapp

This started out to be one of the most controversial parts of the new land. Disney and Coke went together and created a cool serving vessel for Cokes in Galaxy’s Edge. The are in the shape of a thermal detonator, like Leia, posing as a bounty hunter, used in Return of the Jedi.

TSA didn’t like the shape and banned them from all flights when Star Wars: Galaxy’s Edge opened in Orlando. They banned them for about 48 hours. A lot of people (Dad included) missed out on a cool souvenir because we couldn’t take them on an airplane.

The thermal detonator Coke’s are available all over GE, but especially at the Coke Stand which is a droid cart that has been repurposed into a Coke Stand. 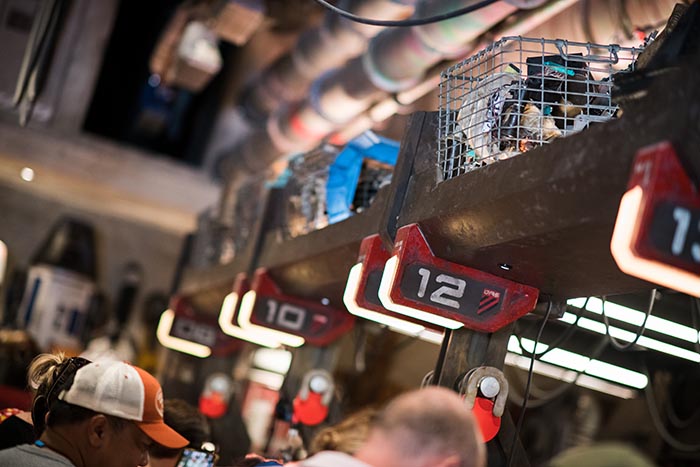 Building a working droid is AWESOME – photo by Laurie Sapp

Star Wars: Galaxy’s Edge has most diverse shopping opportunities anywhere. Yes, you can find the normal t-shirts, clothing, toys and nik naks but you can also build a droid, yes a real working droid and a light saber, no, not a working light saber… yet. 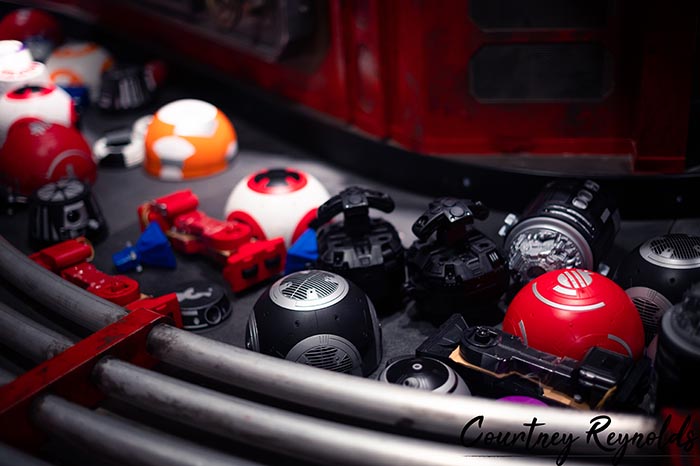 Mmmm, which one do I want? – photo by Courtney Reynolds

One of the most unique souvenir experiences anywhere is found inside Star Wars: Galaxy’s Edge. It’s called Droid Depot where you can build a droid. Build a BB-8 an R2D2 or come up with your own creation. An AWESOME experience.

The droids work and have a radio controller included. You pick your body, your head and parts then go put them together with the supplied tools. What fun.

You will need to prepay for your droid and possibly make a reservation to get in. Space is limited and Droid Depot is very popular.

Here’s another very unique shopping experience. Build a lightsaber at Savi’s Workshop. Savi is a collector who has scoured old Jedi temples for lightsaber parts. You get to design the hilt and choose the color of the lightsaber blade.

Your “Gatherer” will help you through this 20-minute experience. Very cool. (No TSA has not banned lightsabers on flights.)

Want to see a collection of some of the oldest antiques in the galaxy? Would you like to take one home? Stop by Dok-Ondar’s Den of Antiquities (not iniquities) and check out antiques from both the Jedi and the Sith. Every item comes complete with a story. You can even try to bargain with him but don’t get your hopes up. The staff has never seen him make a deal. 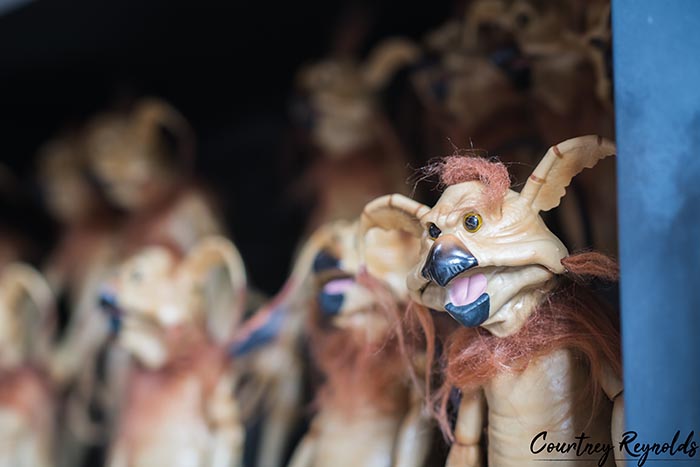 Ugly but cute. Don’t you just want to take one home? – photo by Courtney Reynolds

Take home your own intergalactic alien? Check out The Creature Stall in the Marketplace where you can adopt a Wampa from the ice world of Hoth, or maybe an ugly little Worrt or Rathtar. The Creature Stall has a whole host of little beasts just waiting to be adopted.

Get a Porg plush, a TaunTaun rocking horse, or even a deck of sabacc cards at Todarian Toymaker. The children of Black Spire Outpost have a variety of toys to choose from. These “locally made” toys are cute. Check them out.

Lean toward the Dark Side? First Order Cargo has all the gear you might need to show your allegiance to the First Order. For you Resistance scum, you can gear up at Resistance Supply. These apparel shops have authentic-looking clothing and accessories for those sympathetic to either side.

Robes and Jewels is a gift shop that sells, oddly enough, robes and jewels. Want to dress like Rey, or get a hooded robe to blend in with the locals, you’ll find them here.

I’ve already said it, but in my opinion, Star Wars: Galaxy’s Edge is the best land Disney has ever created. The immersion into the story is mind-blowing. The theming is outstanding. The attractions are the best ever made. OK, the food’s not so great, but what did you expect?

Galaxy’s Edge is not to be missed.