Right in the middle of Disney Springs you
can find a
beautiful area that’s currently in a state of flux – Pleasure
Island. Currently,
it’s home to some fine dining,
lively entertainment, and boutique shopping, but all of that is
set to change
in the coming years so plan to visit soon before it
falls off the
map for good.

This area used to be known as THE after-hours
nightlife spot
of Walt Disney World complete with bars, dance clubs, and more,
but in recent
years the focus has shifted to a high-end retail and dining
district, and plans
are in the works to revamp the entire area to focus on families,
with a
makeover that’s set to be complete by 2016. 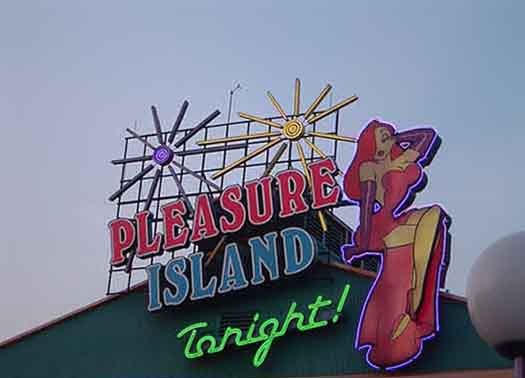 Pleasure Island opened in May 1989 as an
“island” of
nightclubs – adults could pay admission to get through the gate
and then
club-hop around the island visiting multiple establishments for
one price. Some of
the themed clubs included 8TRAX,
Adventurer’s Club, bet Soundstage, Comedy Warehouse, Mannequins
Dance Palace,
and Wildhorse Saloon. And
each night New
Years Eve was celebrated at midnight.

In September 2008, this area “closed” it’s
nightclubs and
began opening a series of shopping and dining locations in it’s
place, although
the area is still largely empty and feels a bit like a ghost
town. A few years
ago, Pleasure Island was slated
for redevelopment into a family friendly complex called Hyperion
Wharf, but
those plans have since been scratched.

In Disney’s most recent announcement about
the redevelopment
of Disney Springs, the area occupying Pleasure Island is set to
become two
distinct areas: Town Square and Landing. Combined with the Marketplace and Westside areas,
Disney Springs will
be renamed Disney Springs, and will become a family-centric
shopping, dining
and entertainment district themed to turn of the century
Florida.

Disney Springs is the subject of much
speculation since the
folks at Disney haven’t given away too many details. But plans include doubling the number of
shopping, dining, and entertainment options from around 75 to
150, and bringing
in a number of new Disney-run establishments and third party
vendors (such as
Starbucks, which was previously confirmed to be coming to
Disney Springs).

Today, Pleasure Island is home to table
service and counter
service dining locations, as well as a few specialty retail
outlets. Theming is
a little on the light side since
most of the spaces previously occupied by nightclubs are still
boarded up and
abandoned, but foliage and lighting lend to the feeling of a
relaxed
atmosphere.

Getting to Disney Springs is
pretty easy.  You
can drive and park for free, or take a
Luxury Motor Coach from any of the Walt Disney World Resorts
(expert Port
Orleans Resort, Old Key West Resort, and Saratoga Springs Resort
– you can take
a boat from those resort hotels). Buses
and boast each have a drop off point on the Westside (near the
entrance to
Pleasure Island) and at the Marketplace.

Pleasure Island isn’t the highlight of
Disney Springs that
it used to be, but if you want to see it in it’s current state,
visit
soon! Better yet,
visit in 2016 when the
whole are is redeveloped into something that Disney promises
will be as magical
as the rest of Walt Disney World.