When you think of plants at Walt Disney World, many people think of EPCOT first. EPCOT is the host park to the EPCOT International Flower and Garden Festival. However, there is another park at Disney that is home to a vast landscape of plants and foliage that carries a unique existence. 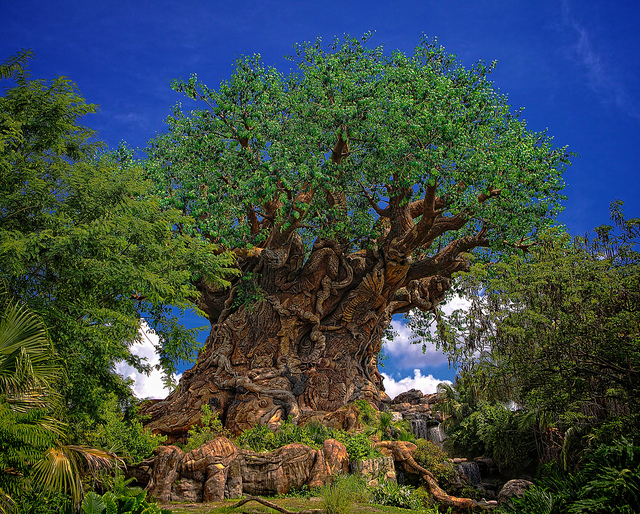 The Tree of Life. Photo by Don Sullivan

It’s no secret that Animal Kingdom promotes the message of conservation and being kind to the Earth. One of the most obvious “plants” at Animal Kingdom is the Tree of Life. The iconic park symbol, this tree is 145 feet tall. There are over 100,000 individual leaves on the tree – all added by hand. There are over 300 animals carved into the tree, and it serves as a reminder to appreciate and value the natural world.Besides the Tree of Life, Animal Kingdom houses many different plants. In addition to the plants serving their decorative and storytelling purposes, they also serve as the source of nutrition for most of the animals that reside at Animal Kingdom.  Animal Kingdom has a large backstage area that consists of veterinarians and dieticians that take the time to design specific diets for the animals. Many of the diets include plants and flowers. Animal Kingdom’s Horticulture Team is responsible for the care and growth of these beautiful plants. A fun fact about the plants at Animal Kingdom lies within the borders of the attraction, Dinosaur. If you notice, the vegetation around the area contains no flowers. There are only dense, bushes and leaves that were only found during prehistoric times. This is a bit of Disney magic, that many people don’t notice. The plants species at Animal Kingdom range from many different locations around the globe. According to MousePlanet.com, Animal Kingdom is home to the largest collection of flowering trees in North America. Over 15,000 sprinkler systems run daily and nightly throughout the park. 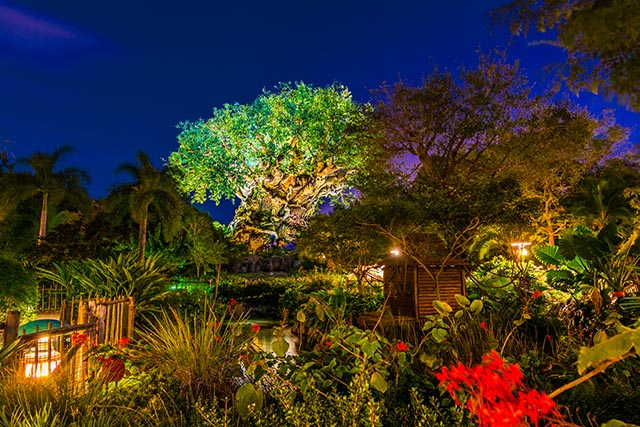 The Tree of Live is amazing after dark – by WDW Shutterbug

Animal Kingdom Horticulturists, work night and day replenishing the landscapes on the savannah, which is the foundation for Kiliminjaro Safaris. The animals feed on the plants on the savannah, as well as the browse that is placed into the savannah by the keepers. My favorite treasure of Animal Kingdom is DeVine. DeVine is a human performer that blends into the landscapes in the Oasis section of the park. She exists among the vines and trees, and is supposed to be symbolic for the relationship between man and nature, and how we must coexist with respect for one another. Animal Kingdom opened on Earth Day, 1998. The conservation efforts at this park are a daily occurrence, and a visit to this park is educationally beneficial to everyone in the family!