The Osborne Family Spectacle of Lights took it’s final bow in 2015. For information on how Disney’s Hollywood Studios celebrates the holidays currently, see:

The Osborne Family Spectacle of Lights has an interesting history. (You may have already heard it, but read on anyway.) Jennings Osborne is an eclectic (for those of you in Arkansas that means strange, just kidding, sis) millionaire in Little Rock Arkansas who loves holidays.

Through the years Mr. Osborne had built a huge Christmas light display. It reached 3 million lights. The neighbors complained and forced Mr. Osborne to discontinue his display. Uncle Walt’s boys came to the rescue and they shipped the whole kit and caboodle to Orlando. 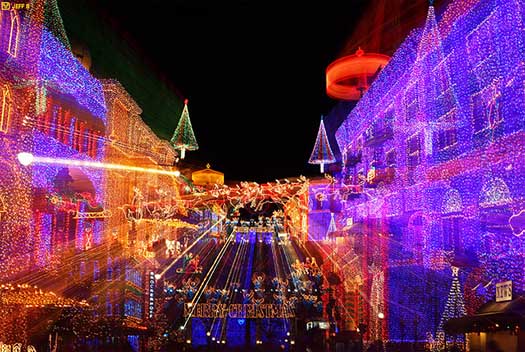 The Spectacle of Dancing Lights has grown through the years. It’s now over 5,000,000 lights strong. Disney actually closes a big chunk of Disney Hollywood Studios in August to start putting up the lights. All of the buildings in the backlot are covered with lights that go on and off in conjunction with Christmas music. (Including one of Dad’s favorite Christmas groups Trans Siberian Orchestra.)

This year the show normally starts around the first weekend of November. In 2013 it will start on November 8 and last until January 2, 2014. 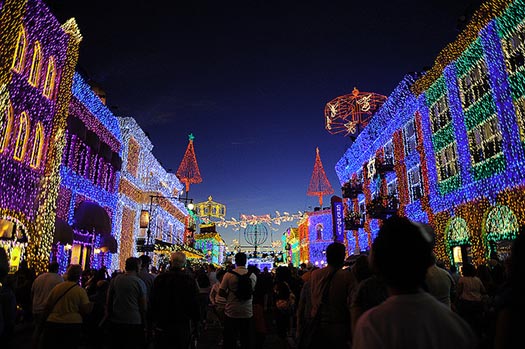 Where you’ll see it

The backlot area is the backdrop for the show. It covers a big area including the area where the houses are located. It will take 30 minutes or more to walk through the show.

Video of the Spectacle of Dancing Lights

Had to include this one. Love the music.

For several years, Disney made the lights into a 3D experience. You were issued 3D glasses at the beginning and wore them through the ride. It was interesting, but it gave Dad a headache

See it for yourself

Want to see the lights for yourself? That sounds like a great idea. Dad can help. Check out Dad’s partners at Destinations to Travel and get your trip started today. What are you waiting for?

The light show is really spectacular. Every year it gets a little better. The music really brings the lights to life or maybe the lights bring the music to life. Whichever it’s quite a show.