Nine Dragons Restaurant is the sit down restaurant in EPCOT’s China Pavilion. It has a large dining room decorated with ornate features, expensive looking wood trim and fabrics that make you feel as if you are in a fine dining room.

The food is based on dishes from 4 regions of China. Disney has added some special touches. Plates look beautiful. 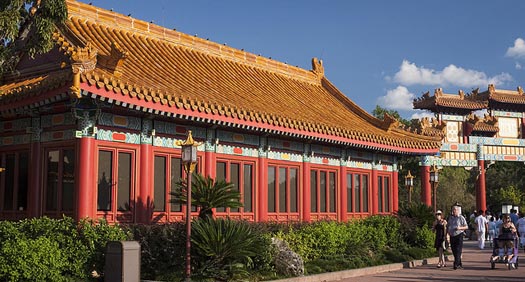 Nine Dragons is another of Disney’s restaurants that gets very mixed reviews. Most reviews are complimentary of the service, but there are several that say service is rushed.

For years, the food here was not very adventurous. It was a lot like what you could get in most local Chinese restaurants (unlike neighboring Norway and Mexico) but portions were very large. The new menu is features cuisine from several regions of China, with a whimsical Disney twist. Unfortunately It seems that not only are the portions smaller, but the execution of the whimsy aren’t very good.

The Dinner Menu is much the same as the lunch menu with some additions (and some higher prices). Dinner entrees are around $2.00 more than the lunch portion.

Dinner also adds a family option where each guest gets a soup, an entree and a dessert.

There are 3 desserts and 2 kinds of ice cream available. The dessert portions are large and meant to be shared.

This restaurant is part of the Disney Dining Plan. Click on the link for more information about how the plan works.