Mrs. Mom really had fun on our last trip. It might have been the best week of her whole life (at least since our honeymoon). I’m not kidding. Over the next few days, I’m going to be sharing some of the highlights of Mrs. Mom’s Magical Adventure. #mrsmomsmagicaladventure.

It was so big that it has never, ever happened before. No one in the history of Dad’s family going to Walt Disney World had ever performed this feat. (OK, maybe once, but never by Mrs. Mom.) In fact, no one ever even thought Mrs. Mom would be able to do it.

So what was it?

I’m almost ashamed to say, and before I put it out there, let me say it was definitely caused by faulty equipment.

Mrs. Mom beat Dad on Buzz Lightyear. There, I said it publicly Mrs. Mom. Are you happy?

That’s the way the whole trip went for Mrs. Mom. We started calling the trip Mrs. Mom’s Magical Adventure, because so many big things happened like it.

So, what happened? Like any normal day, we arrived at the Magic Kingdom and set off for Buzz Lightyear. It’s our favorite ride. We got right on (it was early). We took our normal places and started off. I noticed right away that my gun was not working correctly. No, Mrs. Mom, I’m not making excuses. I told you at the time it wasn’t working right.

As we progressed, even with my gun not working things were going normally. I had a slight lead on Mrs. Mom through the first room, but my score was way down compared to the usual score.

That’s when it happened. Mrs. Mom hit something that gave her 100,000 points. She didn’t even know what it was. She started squealing like the proverbial stuck pig. I grabbed my phone and tried to find one of those Buzz Lightyear cheat sheets to know what to start hitting to catch up, but it was too dark and too bumpy to type anything in on my phone.

The rest of the ride, I was vainly trying to score all the points I could. It was totally frustrating, because I would shoot 3 times and only 1 worked. (Yes, I’m whining.)

Finally the end came. Mrs. Mom won. (I should have said I let her.) Texting and phone calls to the kids immediately started. Dad had been vanquished. The world had spun on it’s axis. Nothing would ever be the same. I’ll never hear the end of this… 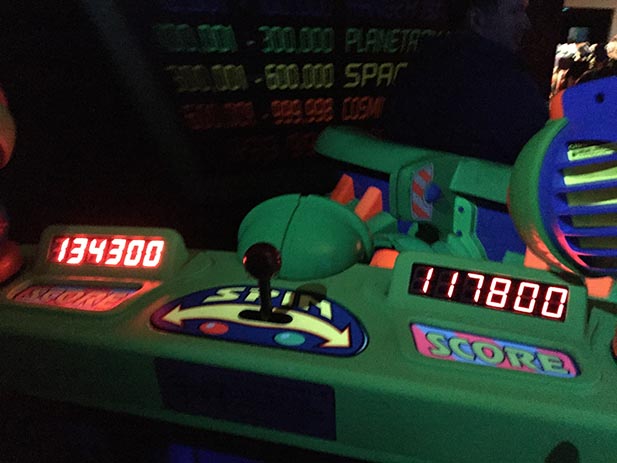 Here’s the score. Remember my gun was broken

Dad is not a good loser as you might be able to tell. I don’t lose often and I don’t like it when I do. But I did take a picture, since I had my phone out, of the score and I did send it to the kids. I was gracious and took all the ribbing. At least until we came back later to Buzz and the world righted itself.

Stay tuned. In our next meeting we’ll talk about scratching something off of Mrs. Mom’s Bucket List. That will be fun.