Mrs. Mom’s Magical Adventure is back…

It’s Friday. It’s been a bit of a tough week around here and I need a little break. I thought it might be fun to write a little ditty about Jack and Diane… Oops, where did that come from?

I keep getting interrupted when I start writing about Mrs. Mom’s Magical Vacation. That’s sad because it was a great trip especially for her. So let’s get back to it.

It’s been a while so maybe I should refresh your memory.

That brings up up to today. Yes, I’ve been working on this for a couple of months and have only written 2 posts. Bad Dad.

I have no idea what’s on Mrs. Mom’s Bucket List. I’m sure it was something like marry Prince Charming (she did) and live a fairytale life. (I’m not sure that’s a good idea. Fairytales usually don’t go all that well.) But being married to Dad pretty much makes all of Mrs. Mom’s dreams come true. Stop laughing…

So here’s the story.

We landed at the Orlando airport, grabbed the rental car and drove to Walt Disney World. How exciting. It was late afternoon. THE PLAN was to go directly to the hotel, dump our stuff then grab a bus to Downtown Disney (where we had that Best Meal Ever) and eat dinner.

As we were pulling up to the hotel, Mrs. Mom made one of the most interesting statements I think I ever heard her say. It was something like…

This is the BEST HOTEL EVER! Just kidding. I just had to throw that in to see if you were still with me.

What she really said was, “you know this will cross an item off my Bucket List.”

Instantly, in my mind I thought… Huh? Did I just hear her right? Staying at this hotel is a Bucket List item? This hotel? Not some exotic hotel in Hawaii? Not some fancy joint in London? This hotel????

What I actually said was, wow, that’s cool. How did THIS hotel get on your bucket list?

OK, I guess it’s time for the BIG reveal. Time to tell you what hotel was on Mrs. Mom’s Bucket List.

You probably already guessed from the pictures, but it’s the… 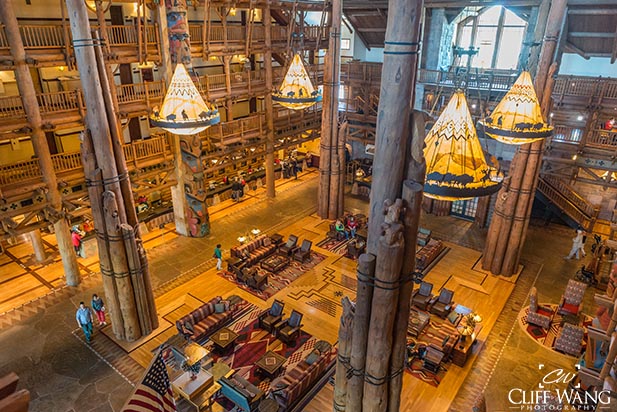 This is what put the Wilderness Lodge on Mrs. Mom’s Bucket List – Photo by Cliff Wang

Now don’t get me wrong. The Wilderness Lodge is a beautiful hotel. The atrium is just STUNNING! I love the hot spring that flows from inside the hotel to outside. The fireplace is really incredible (a real fire in that fireplace would be even more incredible.) I like the Wilderness Lodge, but Bucket List?

Mrs. Mom put staying at the Wilderness Lodge on her Bucket List after we ate breakfast at Whispering Canyon Cafe. We both love the look and feel of the WL. It’s a beautiful hotel.

The Bottom Line is, it’s fun to have Bucket Lists and having Bucket Lists with a Disney items on it is just the way things ought to be. Mrs. Mom surprised me with her Bucket List item, but I was happy to help her cross it off.