Mickey’s Jingle Jungle Parade is the Christmas Time version of Mickey’s Jammin Jungle Parade. For Christmas Disney decks out the whole parade in Christmas ornaments and decorations. They also spice up the music with Christmas favorites.

The parade is a 15-minute processional that is includes high-energy music, dancing and bright colors.

Mickey is the star 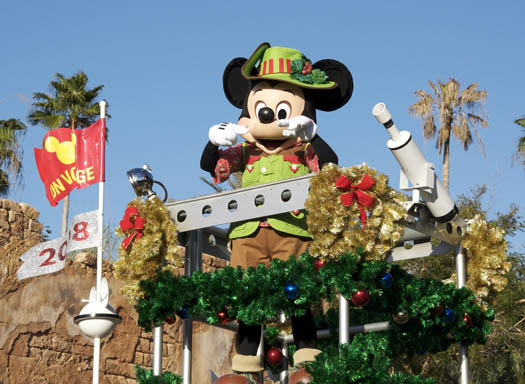 The parade takes the Safari Vehicles and decorates them with all kinds of tinsel , wreaths and Christmas decorations. There are even some really special extras. When Minnie passes you can smell the “candy and cookies” that she’s baking for Christmas. There’s also a vehicle with a big bathtub with cocoa and marshmallows that smells like cocoa and marshmallows.

Interspersed between the safari vehicles is some several performers that keep the parade moving and provide some energy while you’re waiting for the next vehicle. The biggest are the huge puppets that are really moving sculptures. These type sculptures first made a debut in EPCOT years ago. Along with the sculptures are Drummers, Stiltwalkers, and Wacky Taxis.

As the parade moves along you’ll hear lots of Christmas Carols jazzed up with an African beat. You’ll be singing along.

See the whole parade in HD

Christmas at Disney World is the most special, the most wonderful time of the year. Even at Animal Kingdom Christmas shines. Check out the parade. You won’t be sorry.