(Kim has been replaced by Agent P’s World Showcase Adventure)

Ever dreamed of saving the world?  By playing Disney’s Kim Possible World Showcase Adventure you (and your family) can do just that.

This interactive game inside EPCOT’s World Showcase is fun for preteens and parents alike, and adds a whole new element to the country pavilions.

Get your ticket to Adventure 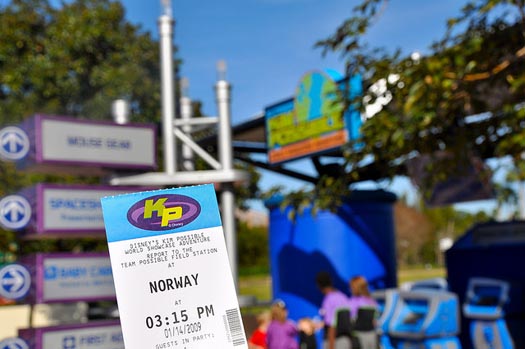 Become a secret agent for the day (or about 30-45 minutes – the estimated playing time for this adventure) as you team up with Kim Possible and her pals to fight crime and hunt down villains.  Use your state-of-the-art Kimmunicator (a GPS-enabled cell-phone-like device provided at Team Possible recruitment centers around EPCOT) to experience World Showcase like never before.

Disney Imagineers have outfitted seven of the eleven World Showcase pavilions with hidden clues, special effects, and RFID enabled “events” that you can control by completing each mission you’re assigned.  You’ll see things you’ve never encountered before and maybe even stumble into a hidden corridor you never knew existed – pretty neat, huh? 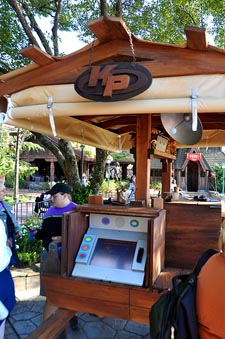 To take part in Disney’s Kim Possible World Showcase Adventure, first head to a Team Possible Recruitment Center – you’ll find them at Innoventions: The Road to Tomorrow, the Odyssey Bridge, the International Gateway, and in a few other locations throughout World Showcase.  There, you’ll be assigned a ticket that looks like a FastPass telling you a specific time to report to a specific country

Hey Dad, if I need a FastPass for this, do I have to sacrifice getting one for Soarin’ or Test Track?

Great Question – no you don’t!  While Disney’s Kim Possible World Showcase Adventure uses a similar pass, it’s not technically a FastPass, so you don’t need to worry about missing out on a major attraction.  That being said, the Adventure has limited availability, so get it in early if it’s on your must-do list.

Back to the game – once you end up in your assigned country, you’ll head to a Team Possible booth where you can pick up your Kimmunicator.  Once it has been activated, you’ll be assigned the pavilion where your mission will take place.  When you arrive there, the fun begins!

The characters from Kim Possible will interact with you through your Kimmunicator, providing you with tips, clues, and instructions on how to carry out the 8-10 steps involved in your particular mission.  The Kimmunicator will also help you to trigger special “events” in each pavilion – like smoking chimneys, singing beer steins, and more.

At the end of your mission you’ll be asked if you’d like to play another round in a different country,  and once you’ve had your fill of the game you’ll get to drop off your Kimmunicator in a hidden receptacle.

I still can’t believe they turned Dad down as part of the Disney Mom’s Panel. (See Dad’s Guide to Dad’s Guide for more on that story.)

You won’t want to miss this.

It’s great to see Disney’s creativity hard at work to take the aging World Showcase and reinvigorate it with this innovative game, appealing to young and old alike.  While I haven’t been able to try it out personally, I’m looking forward to being able to check out all of those hidden special effects – it sounds like pure Disney magic!