It’s about a billion degrees in Orlando during the summer, so how can you stay cool while you visit Walt Disney World? As the poem goes … “Let me count the ways…” 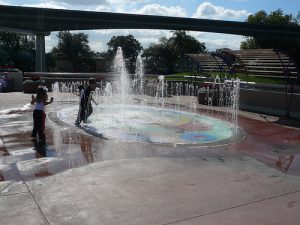 The way to stay Cool in EPCOT

The obvious way to stay cool at Walt Disney World is to jump into one of the great pools. Pools like the Hippy Dippy Pool at Disney’s Pop Century Orlando, or Nanea (the Volcano Pool) at the Polynesian Resort Orlando are – like all of the hotel pools around Disney World –  great places to escape the heat.

Another way to get away from the Central Florida summertime furnace is by visiting one of the awesome water parks. Both Typhoon Lagoon and Blizzard Beach (the world’s coolest water park) are great for getting out of the broiling sun and into a nice, cool lazy river.

Rides in the Parks

Finding places to cool off when you are in the theme parks is essential. Each of the parks have some attractions where you can sit down in the air conditioning and cool off.

There are a couple of places where kids can go and play in spouting. They are located in EPCOT on either side of the big fountain. In this area water dances up out of the ground and splashes the wee ones. Kids don’t just get wet, they get soaked.

Of course if you just want to get a bit wet, you can ride some of Disney World’s water rides. The rides that will get you the wettest are Splash Mountain, Kali River Rapids, and The Backstage Tour in Disney Hollywood Studios (make sure to sit on the left side of the tram if you want to get wet).