Now Storybook Circus has it’s own set of clowns. These silly clowns are going to bring a real circus atmosphere to Disney World. (I’m just glad they didn’t decide to throw in the smell of the elephants.)

Posing at the Clown car 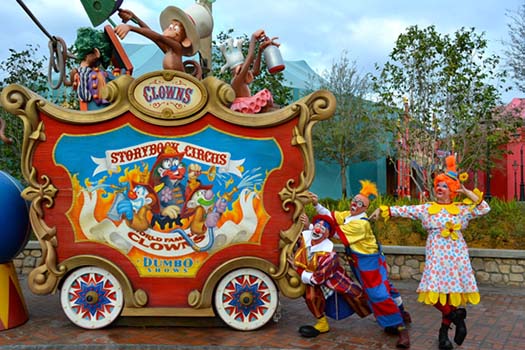 Send in the Clowns

It’s hard to imagine a circus without the clowns. That’s why it’s a litte hard to believe it took Disney almost a year to add some clowns to the Circus. The Storybook Circus. Well now it’s time to send in the Clowns. These clowns that bring laughter to Dumbo’s home. 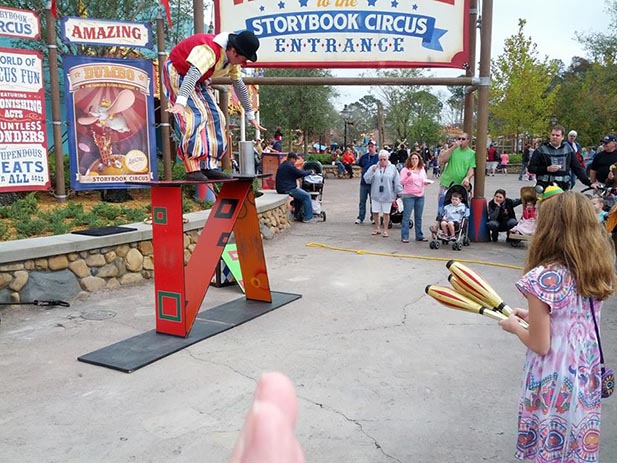 Three Clowns make up the group. They are the clown boss Chuckles Buffoon McMonkeyshine III (buess the boss needs a fancy name) and his protégés, Whinny Horselaugh and Snort. These three thrill audiences with their (as Disneysays) “amazing feats of thrills, chills and hilarity.

(The Princess Talks about the Giggle Gang and The Man-Child)

Along with the the clown gang there is a brand new musical group called Silly Saxtent. The group strolls around a puts a “clown” twist on music ranging from Dumbo to Spike Jones.

Clown training is a very specialized thing. These clowns were trained by the best. Some of the gang trained at the famous Ringling Bros. and Barnum & Bailey Crown College.

Finally the circus has it’s own clowns. Now all is right at the “World”. Check out the Gang. (Not like you could miss them.)