Hey Yall! Dad gave me an assignment to take one day a week to tell yall about my favorite things. I have so many so I am going to break them down by parks and sections. This week I will talk about my favorite show in Animal Kingdom, “Festival of the Lion King”. 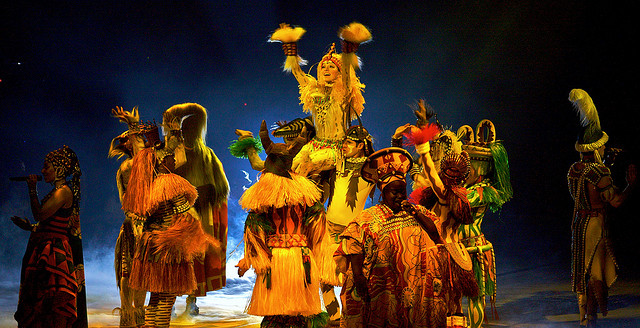 It begins - Photo by Don Sullivan

I was about 8 or 9 when the original movie came out. It was quite an event for all of us to go see it. It was a larger than life movie, which broke up the princess themed movies like The Little Mermaid, Beauty and the Beast, and then Aladdin. It was something that Disney needed to do and with it brought in a new era for Disney animated films.

The Lion King had a great soundtrack. Elton John was the man of the music for the movie and he made some great hits. Now that I am writing about them, they are flooding my brain and will probably be stuck in there the rest of the day. The songs from the movie won 2 Academy Awards and 2 Golden Globe Awards.

Of course Disney saw the success of the movie and music and designed a show that centered on the music. The “Festival of the Lion King” opened on September 12, 2005. The show has all your favorite songs. Give me some feedback and tell me your favorites. Mine is either “Can You Feel the Love Tonight” or “I Just Can’t Wait to be King”.

As you arrive to the theatre you are split into groups. Then you are given an assignment by one of the Disney cast members. Each group is given a specific animal to make the sounds of and do a fancy movement. It is really fun and exciting. You can be elephant, warthog, giraffe, or lion.

As the show starts each one of the host will ask their designated group to make the sounds and see which group is the loudest. It is a great way for kids and adults to get involved in the show. What an awesome way to start the show.

The show starts and the host introduce themselves. They start singing hits from the movies. Some of our favorite characters from the movie come out to help. Timon and Pumbaa, Simba, Rifaki, Zazy, and Mufasa help entertain guests. Other great elements of the show include flying monkeys, acrobatic birds, a fire juggler, and great dancers dressed up as animals. My favorites are the guys on stilts dancing around and jazzing up the crowd.

The show ends with a huge musical number with all of the stars of the show. Guests are invited to sing along and dance. It is the best show in my opinion in Animal Kingdom and possibly all of Walt Disney World. The Man-Child might disagree with me. He loves the Flights of Wonder.