Dad’s thoughts on Fastpass+. Dad is a big fan.

Being an uber planner the idea of being able to plan all the FastPasses for the day is right down my alley. THE PLAN for our first trip with FastPass+ was just incredible. It was detailed. It was minute by minute. It was well thought out, well timed and, frankly, Perfect. Dad’s a good planner.

Look, THE PLAN (we’ll talk about that a bit more tomorrow) had all of our Fastpasses all set up. 3 per day every day. OK, so there are a couple that maybe didn’t work out, but I knew they probably wouldn’t when I made them, but if things had worked out just right…

It was really cool to have all of our Fastpasses in hand, or should I say, on our wrists before we left home.

Let’s talk for a minute about the old way. Who wants to run all the way over to an attraction, get tickets and then come back a couple of hours later to ride? That doesn’t make much sense and it never really did work in THE PLAN. Dad really doesn’t like backtracking. I’m a one time around the park kind of guy.

With the old system the Man-Child had to run get us a FastPass and then we’d have to work them into THE PLAN. The Man-Child was getting kinda tired of being the FastPass runner. It didn’t sound nearly as fun at 25 as it was at 14.

With the old system, we would typically only get Fastpasses for a couple of rides and we’d get those mainly in the mornings. We’d send the Man-Child running ahead to get the FP and we’d make our way to the first ride. He’d show up just about the time we’d get to the ride. He used to be able to walk pretty fast.

Now that’s all in the past. No sending 14/16/19/25/55 year old boys scurrying through the parks. Now we can all stay together and calmly work our way through THE PLAN.

Besides, most of the attractions really don’t need FP. Yeah, sure, you need one for Toy Story Mania, and a couple rides in the Magic Kingdom, and either Soarin’ or Test Track, but for the most part, most days, with a really good plan you can get through the parks just fine. Even when it’s busy, if you plan really well and get started early you can hit most of the rides without too much wait.

But they are a nice perk, and they do get addictive. It’s so cool sometimes to walk past all the people in line sticking out your tongue as you pass. (Notice how Disney has started separating the FastPass queues?) It’s got to be frustrating to stand in a 2 hour line for say Space Mountain and watch all those FP people go flying right past you.

There was one thing that was annoying with the new system. One morning we had FastPasses for Jungle Cruise. They were for just after 9am. The park opened at 8. When we got to the ride there really wasn’t a line and the FP Cast Member said, don’t use those FastPasses. Just go through the regular line and find something else to FP later.

Obviously this Cast Member hadn’t read the memo about Dad’s arrival. Didn’t the silly person know that Dad had a Perfect PLAN? If I were to try to reschedule a FastPass now it might mess up the whole day. Besides, I had FastPasses for everything I needed a FP for. Nope, not in the cards. Stick to THE PLAN and use our FP. 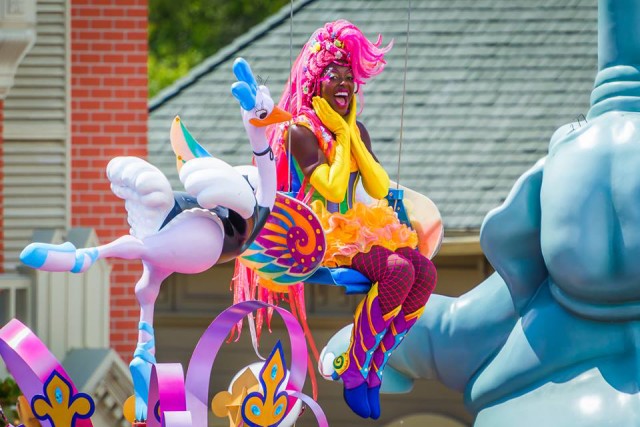 THE PLAN did work almost perfectly. It was amazing how many time we walked right up to a ride and saw that Green Mickey Head. Yep, Dad’s a Fan of FastPass+

Since I’m just rambling, here are couple of random thoughts about FP –

What do you think of FastPass+?