How to use FastPass+ – Go to the front of the line!

FastPass+ is totally cool. It is by far the best tool there is to avoid the lines at Walt Disney World. Just think, a three hour wait, and you’re walking by all of them going right to the front of the line. Told you it was cool!

FastPass+ (FP+) is part of the MyMagic+ program Disney launched in 2013 and was an update to the paper FastPass program that had been around for years.

FP+allows you to bypass the lines on certain attractions. There is a separate line that takes you right to the loading area of the ride with minimal waiting.

Reservations are made using the My Disney Experience app and can be made up to 60 days in advance (more on that later). The reservation system allows you to choose a time to experience an attraction.

To start with, you will get to pick three attractions and/or entertainment options per day. The attractions do have to be in the same park. Additional passes can be obtained after the first three are used in the same or other parks.

FP+reservations are stored in your My Disney Experience account. They will be accessed using your MagicBand or ticket media.

How to Make a FastPass+ Reservation

So how do you make a FastPass+ reservation?

Additional FP+reservations can be made after the first 3 reservations have been used, their time has expired or they have been canceled. You can even make them for other parks.

*Disney Resorts include the Swan and Dolphin and the official Disney Springs hotels.

Modify or Cancel a FP+Reservation

To modify or cancel a FP+reservation –

Again, very Simple, sometimes Fun and it works like Magic (most of the time).

FP+ reservations can be made through My Disney Experience via the app, or online. You can also modify, cancel or book FastPasses at the ticket desk at a Disney Hotel or at kiosks located around the Parks. 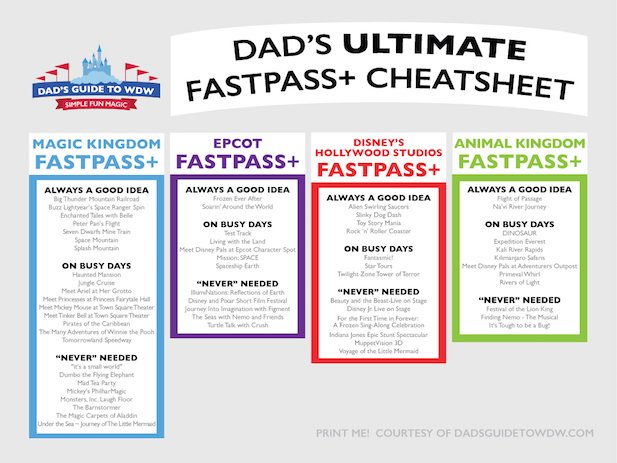 Dad has put all the FastPass+ attractions on one handy, dandy cheatsheet. Just check the chart to know what to FastPass and what not too.

Each park is a little different in how it handles attractions. The Magic Kingdom has the most options and is pretty simple. Epcot and Disney’s Hollywood Studios have fewer options and are set up on a tier system. Here are the options.

In the Magic Kingdom there are 25 different attractions that have the FastPass+ option. Most are attractions, but Disney is experimenting with special areas where you can watch parades or Wishes. Here’s the list …

Remember you can only pick 3 so choose wisely.

Epcot also has their attraction group into groups A and B. Again you are allowed to pick 1 from group A and 2 from group B.

Epcot is interesting because only 1 of the attractions is in the World Showcase.

When visiting the Animal Kingdom there are 12 experiences that you can choose from.

Animal Kingdom, with the opening of Pandora – The World of AVATAR now has two groups. You can choose up to 3 attractions but only 1 from Group A.

The introduction of Pandora has made choosing at Animal Kingdom much more challenging.

Each reservation has a return time. That is the time that you can use the FastPass. For non-show attractions there is typically a one hour window. You will not be allowed in before the return time and may be denied entry after the return time depending on the attraction and the crowd level.

If the attraction breaks down or becomes unavailable during your return window, typically your FP+will be good for the rest of the day.

How to actually use a FP

So, you have a reservation, it’s time to ride the ride. What happens now?

It’s Simple. Go to the FP+entrance for the ride. It will be very clearly marked. You will be asked to scan your MagicBand or Ticket Media. If the light turns green (Magic) you can proceed into the ride queue. If it doesn’t turn green a Cast Member will tell you what to do.

There will be another scanning station close to the loading area and your MagicBand/Ticket Media will be scanned again. Then you will proceed to experience the attraction. Have Fun.

History of the FastPass System

The original paper FastPass system was first introduced in 1999. The original design of the FastPass system is that each attraction has a certain number of people that can ride each hour and the park is open for a certain number of hours each day. For example, the Magic Kingdom’s Haunted Mansion allows 2,000 guests per hour, if the Magic Kingdom is open for 12 hours, then 24,000 guests can ride the attraction.

At the beginning of the day a set number of FastPasses are set aside and given out for a designated return time. As the day goes on fewer and fewer FastPasses are available. Once they are all given out they are gone.

The old paper system is gone. In mid-December 2013 Animal Kingdom was the first park to get rid of the paper system. Magic Kingdom joined them on January 14, 2014 and Epcot and Disney’s Hollywood Studios followed in February.

In April 2014 Disney started opening up FP+to all guests.

Touringplans.com is the unrivaled leaders of creating Touring Plans (imagine that) for Walt Disney World vacations. They have put together a system that will save you up to several hours of standing in line on your vacation. Check them out.

Dad also knows a thing or two about crowds at Disney World. His crowd pages are legendary at least in his own mind.

FastPass+ is Simple. It can be Fun and it’s almost Magic! It is by far the best way to beat the long lines at Walt Disney World. What are you waiting for? 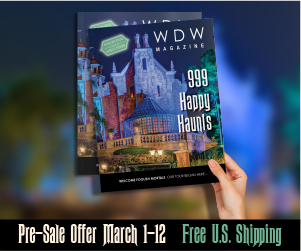