The EPCOT Japan Pavilion is the one of those pavilions in the World Showcase that doesn’t have a ride or a movie or a show. It wasn’t supposed to be that way, but that’s the way it worked out. It’s easy to think you could just walk by without slowing down (unless the Takio drummers are pounding on the drums). Most PLANS don’t plan a stop in this area, but they should, there’s some good stuff here.

Like the nation it represents, you’ll find order and tranquility all around. It can get very crowded just like much of Japan. You’ll find the hustle and bustle of a Tokyo street and the serenity that can only be found in a Japanese garden. 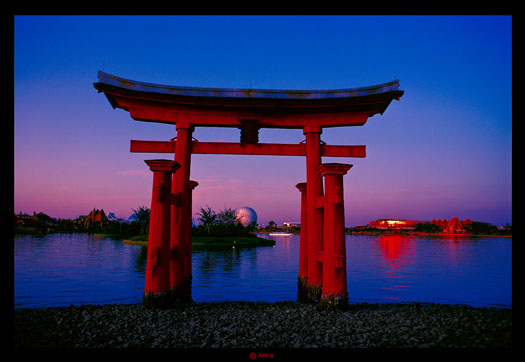 Torii – Torii in Japanese means bird perch. It’s commonly used to mark the entrance to a scared place. Most Shinto shrines and lots of Buddhist temples have a Torii gate on the road the leads into the temple. The Torii marks the transition from the profane to the sacred (or vice versa). (Adapted from Wikipedia.)

The EPCOT Japan Pavilion is home to a some great restaurants. If you don’t stop here for any other reason, check out one of the great dining options.

Teppan Edo is Japan’s signature restaurant. It’s Dad’s family’s favorite restaurant in EPCOT. Teppan Edo replaced Teppanyaki in 2007. Teppanyaki is a form of cooking where food is cooked on a hot grill. At Teppan Edo you sit around a grill and a chef prepares your meal. The chef puts on a show as he or she cooks. It’s not only great food, but also an interesting show.

Tokyo Dining is not just eating in the biggest city in Japan, it’s also an eating area outside of Teppan Edo. Tokyo Dining is a combination sushi bar and full service restaurant. At Tokyo Dining you can get everything from Octopus sushi (and all other kinds of sushi) to a New York Strip steak and much more.

The menu at Tokyo dining includes sushi, sashimi, tempura and grilled steaks and chicken. The seating is in an open area. There are several tables mainly for 2 or 4 guests.

Katsura Grill is the third dining area in the EPCOT Japan pavilion. It’s tucked away on the other side of the pavilion from Tokyo Dining and Teppan Edo. Katsura Grill (formerly Yakitori House) serves traditional Japanese noodle dishes and Teriyake and Tempura.

Although there is no ride in this area, there is daily, regular entertainment. Takio Drummers perform several times a day. You can see them playing their big drums at the 5 story Japanese pagoda.

The other “entertainment” in Japan is Miyuki. Miyuki is a “candy artist”. Several times a day she takes hot candy and turns it into beautiful animals or flowers. There are 15 “candy artists” trained in the world and Miyuki is the only woman.

Entertainment for the Younger Kids

Several years ago, Disney started adding things to help keep the attention of younger kids. The World Showcase wasn’t the favorite stop for little ones. The first addition was called Kidcot. Kidcot stations are all around the World Showcase including here in Japan. At Kidcot, kids can decorate pre-made crafts and take them home as souvenirs.

The other entertainment in EPCOT Japan for kids (of almost all ages) is called Phineas and Ferb: Agent P’s World Showcase Adventure. Grab a “FONE” and be a special agent. What kid doesn’t want to do that?

Mitsukoshi is one of the largest department stores in Japan. The Mitsukoshi department store sell lots of Japanese items. Those include clothing, jewelry, books, anime items and toys. Lately several some of the new Japanese pop-culture items have been showing up on the shelves.

This is one of the original pavilions in EPCOT. It opened in 1982 with the rest of the park. There have been several ideas and even some plans to put an attraction in this area. Some were very close to production. Money, sponsorship and controversy have gotten in the way. It’s a shame. This area needs something to draw guests into this beautiful pavilion.

Try out Teppan Edo or any of the other restaurants here. They are consistently rated very highly. If you are into gardens, check out the beauty and the serenity of the garden area.