Grab the little ones and climb on the back of one of the ride vehicles and take off into the wild blue yonder. Soar away high into the sky driven by one little mouse. 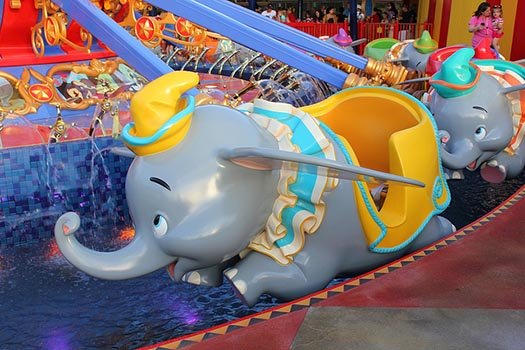 The new and improved Dumbo the Flying Elephant is the centerpiece of the new Storybook Circus. The circus is set in “Carolwood Park” just like in the movie. Casey Jr. (the train from the movie) comes around from time to time and drenches the kids. Casey Jr. even has his own house (which you can tour.)

Dumbo is the “A” attraction and “The Great Goofini” is the “B” attraction. It’s a cute roller coaster for kiddos. 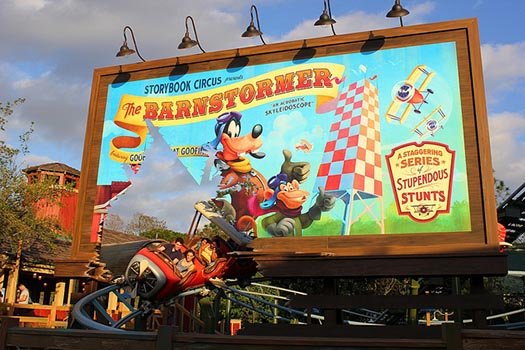 The Big Top Tent – The Preshow

The biggest change to Dumbo the Flying Elephant is the waiting area. The old area was just out in the middle of everything. No shade, long lines, bad combination. With the new ride all of that changes.

Following the Circus theme, the waiting area has been moved inside. Into the “Big Top Tent”. Under the Big Top, children can play in a wonderful interactive playground and parents can wait in air conditioned comfort.

The Big Top Tent is really the beginning of the ride and part of the “Big” Show. Under the tent kids will be able to play on several different types of “circus-themed playground experiences”. The experiences are …

When you arrive under the big top, you’ll get one of those restaurant pager things that will summon you when it’s your turn to ride. (It might be hard to tear kids away from the playground.)

Check out this video from Disney Parks about the Big Top

The Big Top is a great addition to Dumbo.

Dumbo the Flying Elephant is the star of any show. Not that there is really anything spectacular about the ride. You hop in a ride vehicle and go round and round and up and down for between 30 seconds and 2 minutes. Nothing special.

Except. Like most of Uncle Walt’s creations, take a mundane midway ride and Disney it up. Wow. Take one of the most beloved stories of all times and all of the sudden this little ride becomes one of the best, most loved rides anywhere.

It seems like every kid wants to ride Dumbo before any other ride. When we took the whole bunch, even the big kids had to ride Dumbo. (The littlest got to ride with Granddad. It was really cute.) 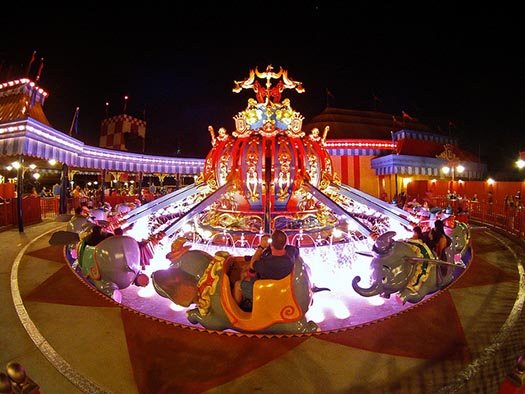 When you come out of Dumbo you are in the middle of Storybook Circus where you can play in the water that Casey Jr. spits, explore the Circus (look for the peanut shells in the concrete) including the Carolwood Park Train Station and even take a ride on The Great Goofini.

Yes, now Dumbo the Flying Elephant not only has the Big Top Tent, FASTPASS is also available for the ride. For the first time ever, you can get a FASTPASS so you can plan your ride time. This is a big change.

There are still lines outside Dumbo 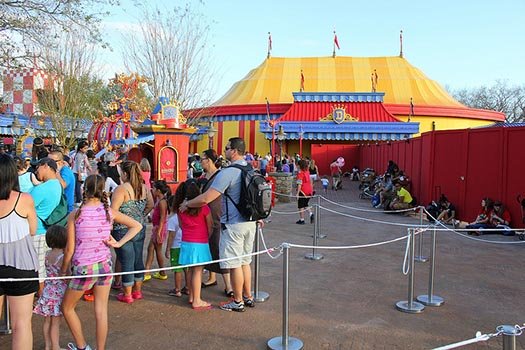 For years, Dumbo the Flying Elephant has been one of the most crowded rides in the Magic Kingdom. From the time the park opened the line grew and grew. Even though the ride is 2 minutes or less long, you use to have to wait as much as an hour in line.

All that has changed (somewhat). Lines are still long, but the wait is a lot more comfortable. Instead of hour long waits, it’s now about 30 minutes.

You can find out the best times to visit Dumbo and all of the Magic Kingdom by subscribing to Touringplans.com. They even have a touring plan called Dumbo do or die in a day.

The New Dumbo the Flying Elephant is amazing. The new Big Top play area is a great idea and the air conditioning is a welcome change. This is still one of the all time best rides in the Magic Kingdom. If you have young children it should be one of your first stops.