One of the most popular destinations for families at Disney Springs is the Disney Springs Marketplace. This area is bustling with entertainment, shopping for children, teens, and parents, and some really neat dining options.

The Disney Springs Marketplace includes a number of one-story buildings that house shopping and dining in a beautifully landscaped environment along the shore of Lake Buena Vista. Whether you visit during day or night, there is lots to do and see – plus it’s the perfect place to do some souvenir shopping! 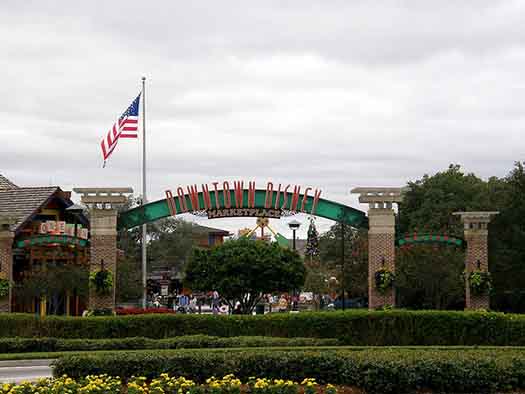 The Marketplace has gone through a lot of changes over the years as Disney Springs evolved out of the former Lake Buena Vista Shopping Village. It has come to be known as a family friendly destination with entertainment options by Disney as well as big-name third party vendors like LEGO, Ghirardelli, and Rainforest Café.

In Disney’s most recent announcement about the redevelopment of Disney Springs, Marketplace will join Westside and (replacing Pleasure Island) Town Square and Landing, in the re-named complex to be known as Disney Springs – a family-centric shopping, dining and entertainment district themed to turn of the century Florida.

Disney Springs is the subject of much speculation since the folks at Disney haven’t given away too many details. But plans include doubling the number of shopping, dining, and entertainment options from around 75 to 150, and bringing in a number of new Disney-run establishments and third party vendors (such as Starbucks, which was previously confirmed to be coming to Disney Springs).

Today, Pleasure Island is home to lots of highly themed table service and affordable counter service dining locations, as well as lots of shopping outlets (most owned by Disney). Themed like a village marketplace, expect to see lots of wood beams, stonework, and landscaped foliage – along with fun touches like a carousel and interactive water fountains.

Getting to Disney Springs Marketplace is pretty easy. You can drive and park for free, or take a Luxury Motor Coach from any of the Walt Disney World Resorts (expert Port Orleans Resort, Old Key West Resort, and Saratoga Springs Resort – you can take a boat from those resort hotels). Buses and boast each have a drop off point on the Westside (near the entrance to Pleasure Island) and at the Marketplace.

Marketplace is one of Dad’s favorite parts about visiting Disney Springs. With great options for food, lots of interesting Disney stores to window shop in, and a family focused feel, this is a great spot to stroll around in the afternoon or evening.