One of the best memories our family has is the Christmas we took the whole family (Mrs. Mom’s side) to Disney World.

I was infatuated with the idea of taking a limo from the airport to the hotel (Polynesian Resort). I also wanted to keep it a secret. I was making THE PLAN for the whole group (imagine that) so I started working on getting us all there.

Because I wanted to keep it a secret, at least from the women and the children, after putting out the first itinerary, I called all of the MEN and proposed a surprise for the whole bunch. It was virtually the same price to rent 2 eight passenger limos as it was to take a shuttle to the parks. (Remember this was before Disney took you to the parks for free.) The MEN were excited and assured me they could keep a secret. (I made them all sign a contract in blood.)

About a month before we left, I was working on the details when Mrs. Mom came in and started asking me some questions about the trip. She’s a closet planner now. I don’t remember exactly what I said, but she heard me say something about the limo and figured out, so I had to get her to swear to keep it a secret from her mom and the kids.

The day finally came and we flew to Orlando. (Half of us went early, the others came later.) Me, Mrs. Mom, the Princess and the Man-Child, Mrs. Mom’s Mom and Dad stepped off the plane and headed to the baggage claim area. We were met at the bottom of the escalator by a man holding a sign that said “Dad’s Family” or something like that. He said he’d help us with the bags. Somehow Mrs. Mom’s Mom didn’t understand what a man in a suit, with a “drivers” cap, holding a sign with her name on it meant. 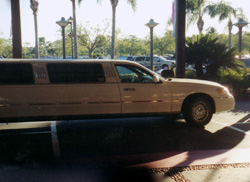 We came out of the airport, after getting our mountain of suitcases, and started toward the vehicle area. There was a mini-van parked next to a couple of limos. Mrs. Mom’s Mom and the kids started toward the van when I stopped them and said, pointing at the big long white limo, “no, everyone, that’s our car.”

Screaming ensued. Kids freaked, Mom’s Mom freaked. Mrs. Mom cried. Shouting and hugs were shared by everyone. It was beautiful.

It was so cool pulling up to the Polynesian Resort…