Dad wants to be a Disney World Mom. Look what the get, two Disney World vacations, and a chance to actually have your name on the Disney Website. Sign me up. 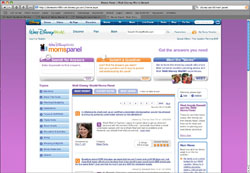 In September 2008, Disney started taking applications for people to serve on the “Walt Disney World Mom Panel”. When I saw the announcement for the job, I thought hey, that’s a job for me. I’m a Walt Disney World expert (just ask me). I know Disney World in Florida. I should send in an application. Just one problem…

This is discrimination, call my lawyer.

I’m as Disney as they come. I’ve been a Disney nut all of my life. I honeymooned at WDW when there was just the Magic Kingdom. I’ve taken parents, in-laws, out-laws, kids, adults… I’ve spent years of my life living, working, studing Walt Disney World. I used to spend 2 hours a day reading rec.arts.disney.parks. Take that Disney.

So why doesn’t Disney want a Disney Dad? Huh? (Yeah, I know, Dads can apply. Its the principal of the thing. Yes, I did apply.) This smacks of a little too much chick-a-facation (and yes, I do make up words), if you ask me. A little too much estrogen at Disney Central? Come on guys, times for a little manliness at WDW. Be bold.

I can’t believe it. This is an outrage! I’m going to call somebody at Mouseland and give them a piece of my mind. (Or not, maybe I better keep all the pieces for now.)

I’ve been rejected as a Disney World Mom. Yes, I know that comes as a shock. I’m trying to cope. They say that it helps to talk about it.

Here’s what Disney had to say about my application.

We realize how hectic it can be to keep a family going day-to-day, so we truly appreciate the effort you put into your application. It was clear just how much you do for those you love and the inspiring role Disney plays in your life. We were incredibly delighted by the heartfelt response and very humbled by the special stories you shared in your application.

And still they didn’t select me to be a Disney World Mom. (Yeah, I know it was a form letter, and I didn’t tell any special stories, but you can’t fault me for trying.)