The events run all year. In fact they start just after midnight on January 1. It seems like there’s always something special going on at Walt Disney World! 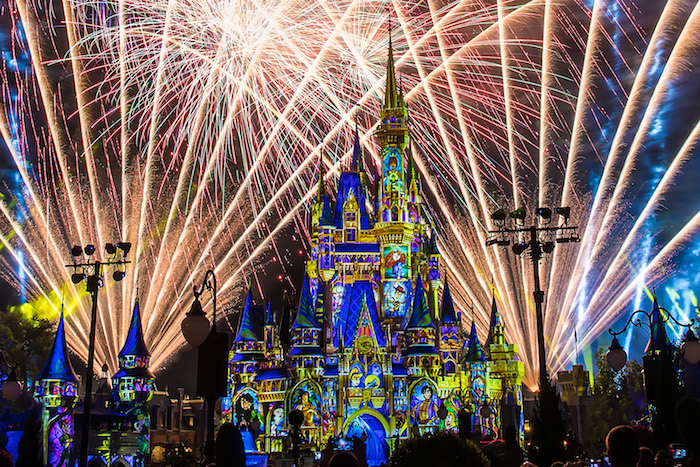 Take a look at every month during the year and find out about the Disney World events during your trip. 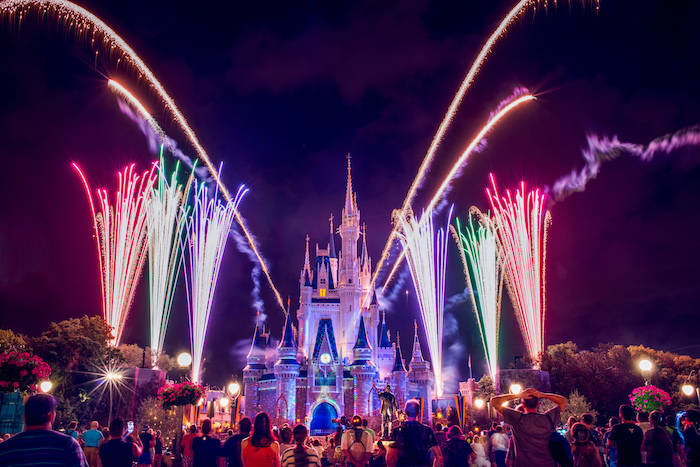 The year starts off with a BANG – Photo by Cliff Wang

After the fireworks end, Christmas decorations stay around until the first Sunday after the 1st, then it all disappears.

The Walt Disney World Marathon Weekend happens the first full weekend and draw 30,000 runners. The 5k is on Thursday, the 10k is Friday, the half-marathon is on Saturday, and the full blown 27 mile marathon is run on Sunday. The marathoner’s wind their way through the property ending in EPCOT. “You’re all are crazy.” – Dad

The biggest event in January opens mid-month with The EPCOT International Festival of the Arts, celebrating visual, performance, and culinary arts. 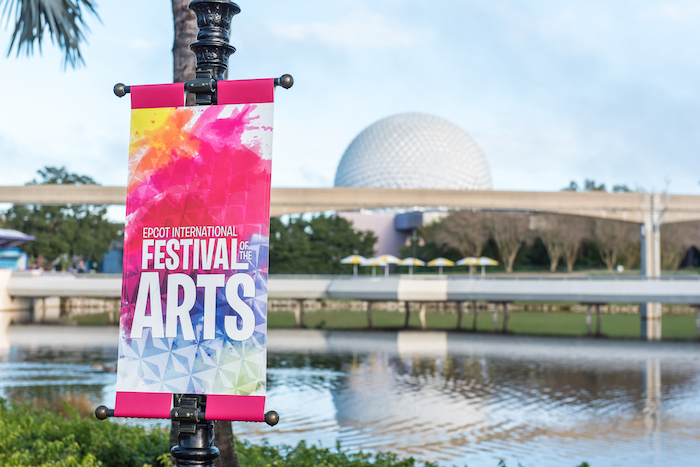 February Disney World Events bring love, ESPN and baseball to Disney World. What a country. Plus, The EPCOT International Festival of the Arts continues.

Valentine’s Day: Love is in the air on February 14 at Disney World. Or is it? Disney doesn’t really do much for Valentine’s Day. It’s kind of sad.

Ladies, grab your Nike’s and take off on a run through the Magic Kingdom and EPCOT. The Princess Half Marathon Weekend includes a 5k on Friday, a 10k on Saturday, and the namesake half marathon on Sunday. Who’s up for a little run?

Spring Training for the Atlanta Braves starts around the the end of the month. games are played for about 3 weeks in Champion Stadium in Disney’s Wide World of Sports Complex. 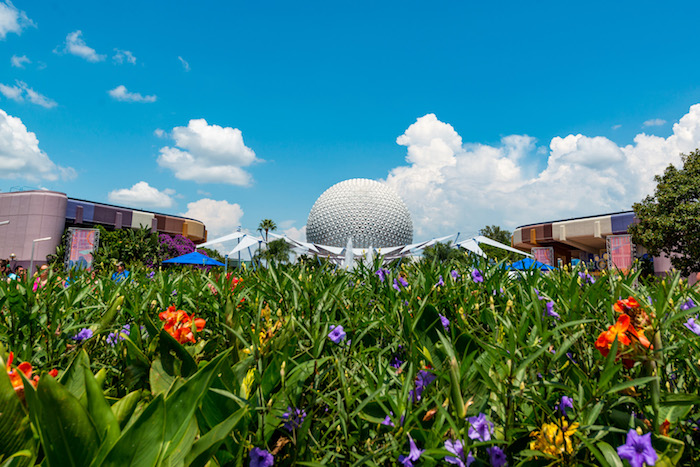 EPCOT blooms in the spring – Photo by Cliff Wang

Spring is in the air in March and that means flowers. (Sounds like a song should be in there somewhere.) Check it out.

March brings an incredible Garden Rocks concert line up to EPCOT’s America Gardens Theater for The EPCOT International Flower & Garden Festival. There’s lots of gardening tips from gardeners all over the world, some incresible displays and topiaries – and even FOOD! The Festival starts in March and runs through the end of May. A great time for a Spring Disney World vacation.

If Easter comes in March the Easter events will happen in March. There are special dining options, and a meet and greet opportunity with Mr. and Mrs. Bunny in the Magic Kingdom. Most of the hotels have some special happening tied to Easter. 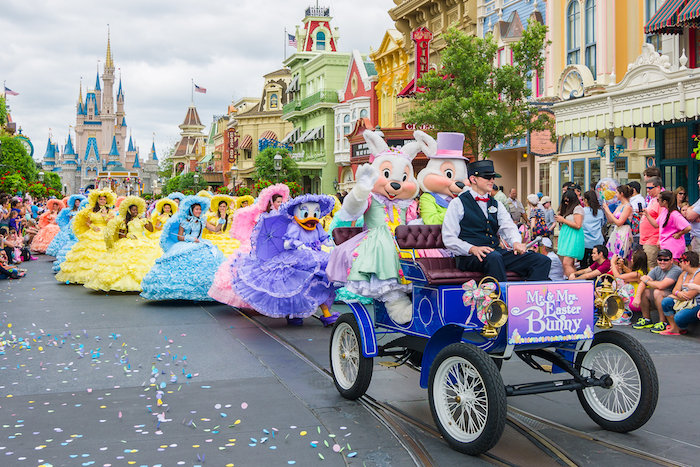 More running is on the schedule for this month too. The Star Wars Half Marathon – The Dark Side features a a 5k on Friday, a 10k on Saturday, and the half marathon on Sunday. (The Light Side is run on another weekend in Disneyland, out in California.)

If Easter comes in April the Easter events will happen in April. There are special dining options, and a meet and greet opportunity with Mr. and Mrs. Bunny in the Magic Kingdom. Most of the hotels have some special happening tied to Easter. 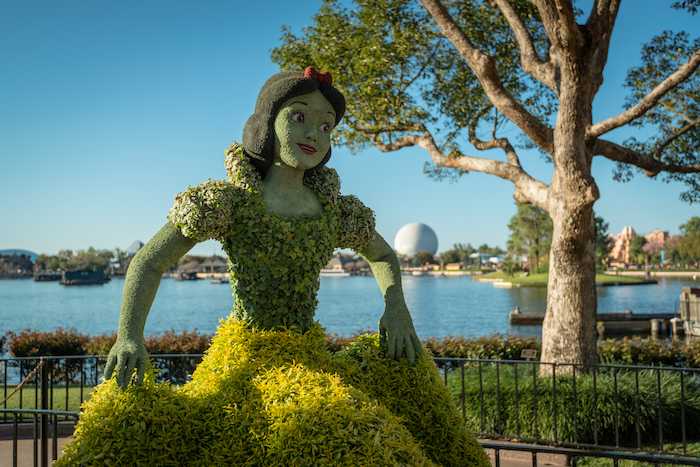 The topiaries are incredible – Photo by Cliff Wang

May is a slow month for Disney World Events until the big one shows up … The EPCOT International Flower & Garden Festival ends it’s run. 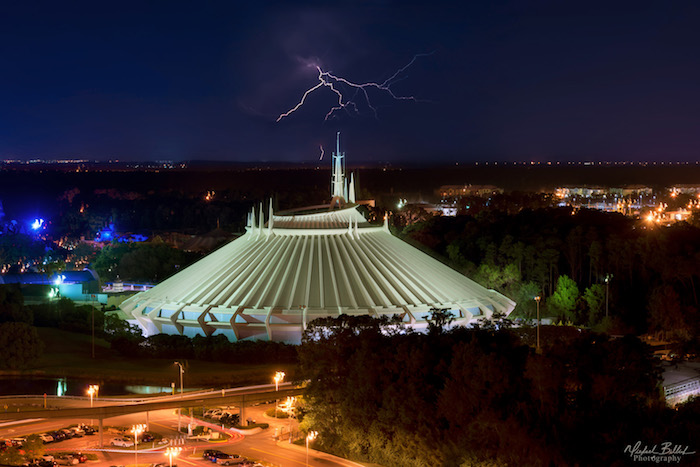 June is pretty quiet at WDW – Photo by Mike Billick 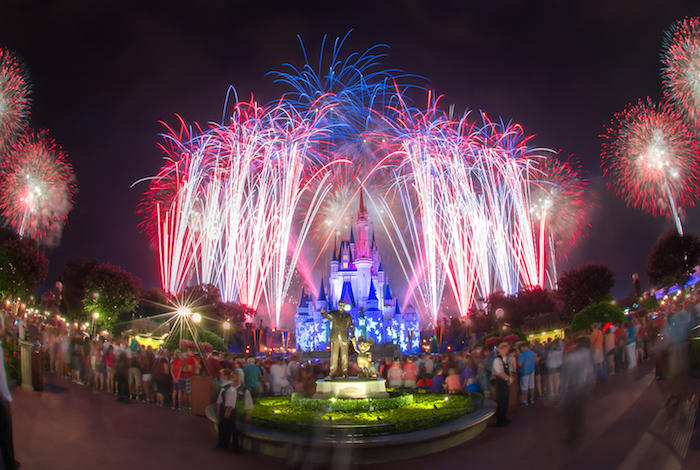 It’s a hot as a firecracker in Disney World during July.

July 4th. Independence Day. Fireworks day. The Magic Kingdom, EPCOT, Disney Studios, and Disney Springs all have special firework shows with patriotic music (some of the fireworks shows are done of the 3rd and the 4th in order to serve massive crowds). 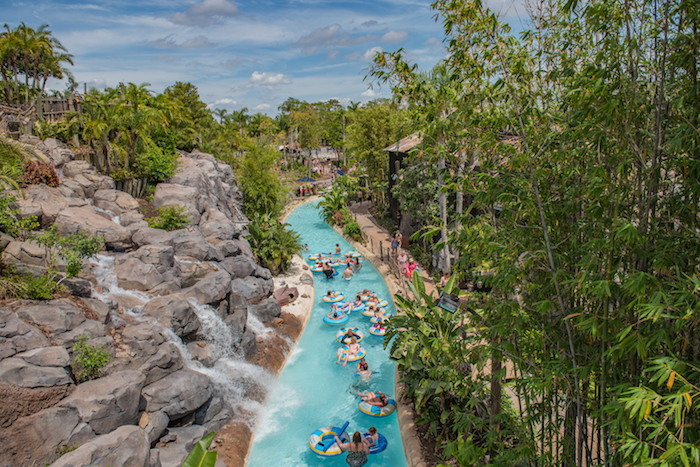 August has recently become a busy little month for WDW happenings. The last few years have seen some special limited time events come to Walt Disney World’s water parks, but that’s not even the headliner this month…

Goblins and Ghosts roam the Magic Kingdom during Mickey’s Not-So-Scary Halloween Party which starts up mid-monthand is held on selected days throughout the fall. There’s a special parade (Boo To You Parade) and fireworks show (Happy HalloWishes). There’s also Trick-or-Treating in the park. Children of all ages are invited to wear their best costumes. You’ll have a ghoul of a good time.

The EPCOT International Food & Wine Festival starts up at the end of the month. Drinks and appetizers from countries around “the world” are featured. There are special seminars, guest speakers and special dinner party’s thrown by Disney Chefs.

This year, Orlando Gay Days has been moved tothe second weekend of August. Previously, it was held in May/June. Events are scheduled Thursday through Sunday. One park is featured each day and most of the activities will be centered there. There has been some concern over the last few years about behaviour of some of the attendees.

Let me be clear, this is not a Disney sanctioned event, but it does draw crowds and you should know about it. 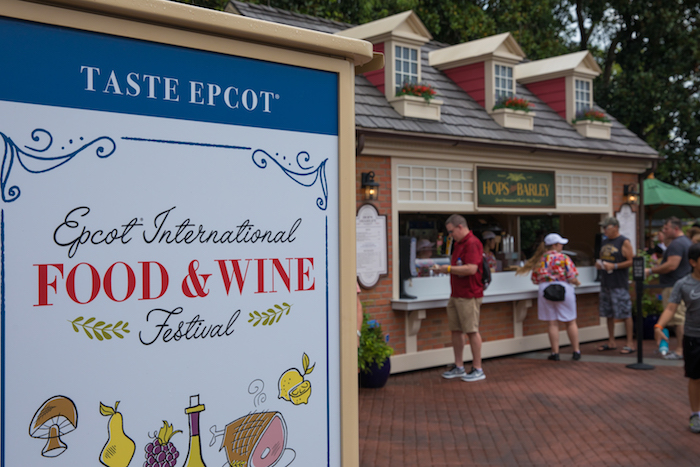 September is the end of the summer and the beginning of holiday months at Disney World and one of the quietest when it comes to Disney World events. Mickey’s Not-So-Scary Halloween Party and The EPCOT International Food & Wine Festival continue. 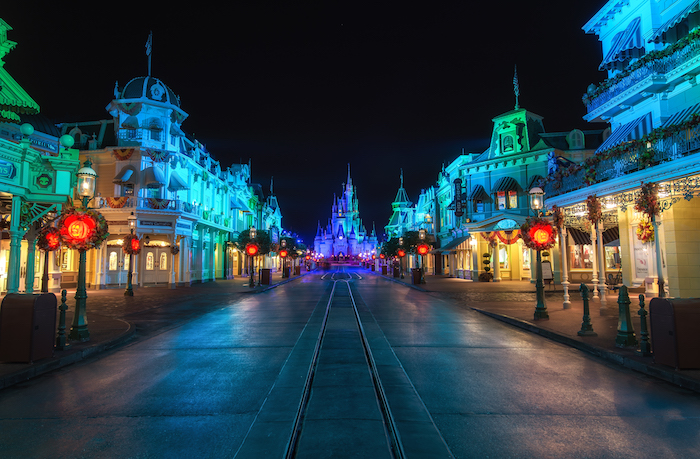 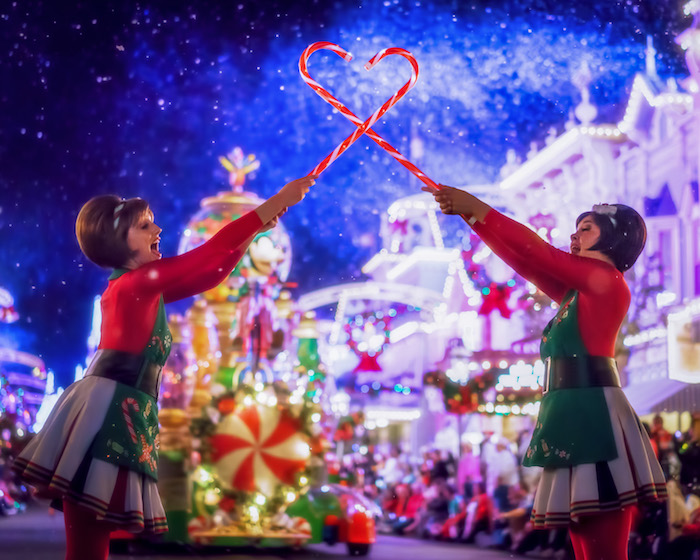 Dapper Day happens around the middle of the month for 2 days (one in Magic Kingdom and one in EPCOT). This is an unofficial event but it’s pretty fun to get dressed up in your finest for lots of cool photo ops with other guests, if you’re into that sort of thing.

Thanksgiving brings out the feedbag. Special menus are available at most of the restaurants (for special prices). (It’s sad that Disney almost ignores Thanksgiving. I love Christmas, but in the good old days, it didn’t start until the day after Thanksgiving.)

Run, eat and drink. What a combination. Disney’s Wine & Dine Half Marathon Weekend is held during the Food and Wine Festival. It concludes with a big after hours party in EPCOT. Just like the other similar weekends, there is a 5k on Friday, a 10k on Saturday and the half Marathon on Sunday.

And Dad’s saved the best for last…

It’s beginning to look a lot like Christmas, everywhere you go…

Just like everywhere else, Christmas comes early to Walt Disney World. Christmas is the biggest of the Walt Disney World Events. The hotels decorate their lobbies with Christmas trees, garland, tinsel, lights and any other decoration you can imagine. (You’ve got to stop by the Grand Floridian and see the Gingerbread House.) The parks magically transform into Christmas Wonderland. In EPCOT each country has their “Santa” come out and tell their story.

Christmas is so much more than a single event or festival – sure, Mickey’s Very Merry Christmas Party and The EPCOT International Festival of the Holidays are headliners, but the entire resort gets into the Christmas spirit. 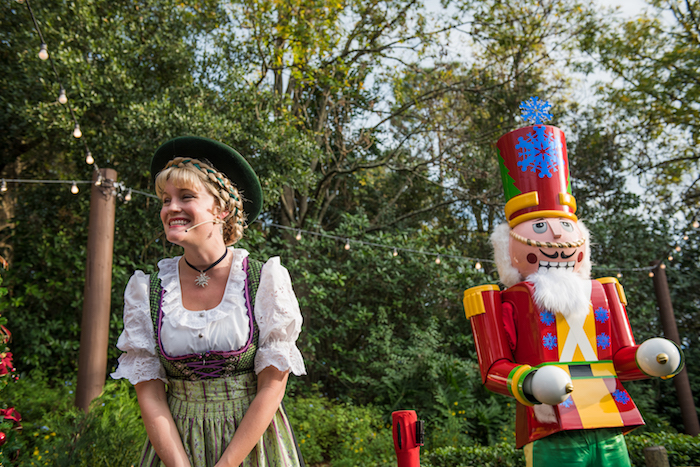 December is the busiest time of the year for events. The Christmas events are incredible. The Pop Warner Cheer, Dance and Football Championships kick the month off.

“I’m dreaming of a White Christmas…”

And a White Christmas you can have in the Magic Kingdom during Mickey’s Very Merry Christmas Party. You and 20,000 of your friends can enjoy cocoa and cookies with Mickey and Friends. It actually snows (actually it’s soap crystals, but it looks like snow) on Main Street. It’s beautiful.

Holiday Wishes is preformed on party nights and on selected nights throughout December.

In EPCOT you the Candlelight Processional is preformed twice nightly in America Gardens Theater. If you like Christmas music at all this is a must see event. A choir and orchestra sing and play Christmas Carols while a guest narrator reads the story of Jesus’ birth. It’s one of our favorite things at Disney World.

Not to be outdone Disney’s Hollywood Studios hosts a Flurry of Fun! It’s truly an impressive site.

There are sleigh rides, decorations, special parades, special shows, carolers, and Christmas cheer everywhere during the month of December.

Christmas is the best time to visit Walt Disney World.

How about going and experiencing one of these great events? Sign up today at with Dad’s partners at Destinations to Travel. They’ll help you make all your dreams come true. Really. Give them a shout today.

Disney World Events are what Disney does best. It separates them from all of the other theme parks. It doesn’t matter when your Disney World vacation is, winter, spring, summer or fall you will probably be there during an event.