Let’s see, what will crowds at WDW be like in 2016? Dad knows. Check out our brand new 2016 Walt Disney World Crowd Calendars. Let’s have some Fun! 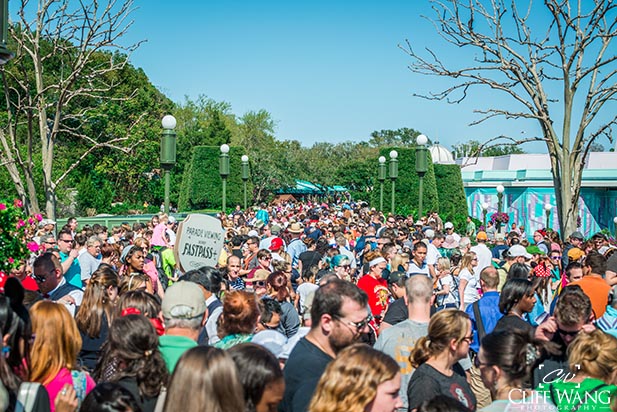 There is nothing that can take the Magic and Fun away from a vacation than having to fight big crowds all the time. The Simple way to avoid crowds at WDW is to go when nobody is there.

That’s why Dad’s created his Disney World Crowd Calendars for 2016. So you can find the best time to visit WDW for your Simple, Fun, Magic vacation. Isn’t that Dad guy something? 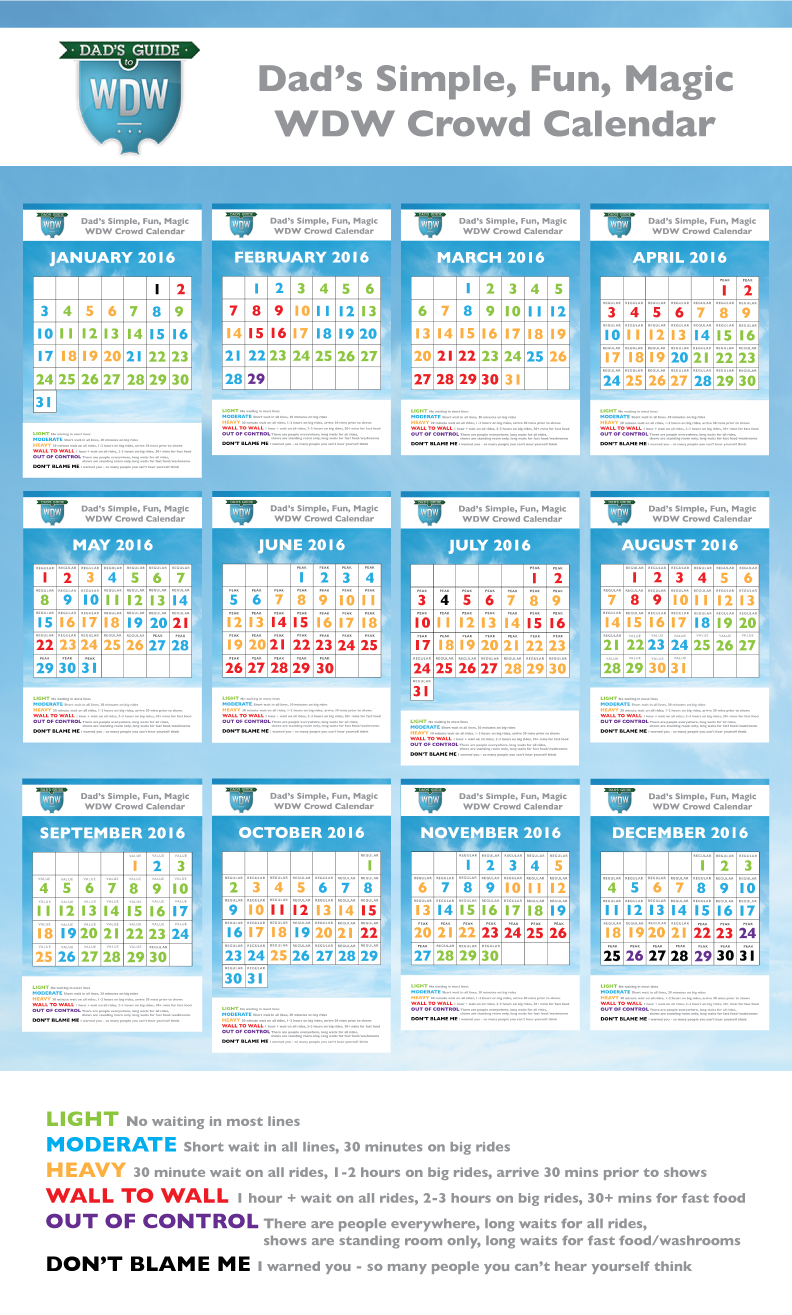 Click on the links to the months below you can see the full size calendars.

As you can see above, Dad has devised a cool color coding system to make it really simple for you to pick the best dates for your trip.

But even better, Dad has broken down the months so you can dive a little deeper into finding the best time for your vacation.

Check out the 2016 monthly overviews. 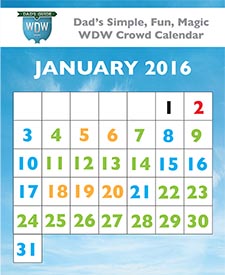 January is one of the most interesting months to visit Walt Disney World. One of the busiest days of the year is January 1 then, after a couple of days, the crowds just vanish.

The WDW Marathon will draw some really crazy people who want to run around WDW. How crazy is that? It doesn’t affect crowds all that much but it is kinda fun to watch.

The Martin Luther King holiday week can be fairly busy, but the rest of the month is really nice crowd wise.

All in all, January is a great time to visit Disney World. 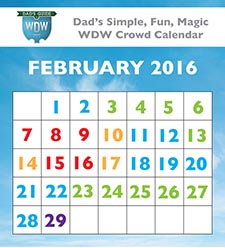 February is just another average month at WDW when it comes to crowds. The month starts off quietly and the bang. Everyone in the whole world shows up.

The first couple weeks of the month are nice and peaceful. Then President’s Day week brings in a crush of humanity for a few days. It’s definitely a week to avoid.

The Princess Half Marathon Weekend is the end of Presidents Day week, but by then all the crowds are gone. 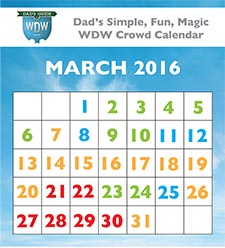 March brings baseball and flowers to Disney World. In late February, the Atlanta Braves start Spring training at ESPN Wide World of Sports Complex. Over in EPCOT the International Flower and Garden Festival kicks off.

March is a very colorful and interesting month. 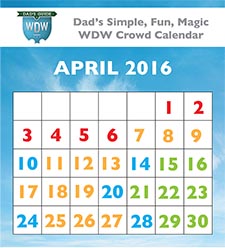 April is a funky month. The first couple of weeks will be really busy with the end of Spring Breaks. Nothing unusual about that, but then the funkiness starts. 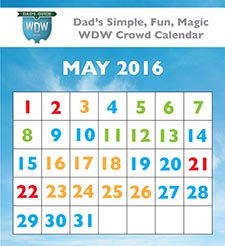 May is a wonderful time to visit Walt Disney World. For the most part crowds are light. The Flower and Garden Festival finishes up the first couple of weeks.

The weather is also pretty nice in May. The summer temperatures are still a few weeks away (usually.)

May is a great time to visit Walt Disney World. 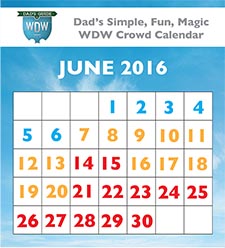 June arrives and it get’s Hot, Hot, Hot! Summer at WDW kicks off in mid-June and the crowds come out of the woodwork.

June doesn’t come in like a lion. The first couple of weeks are pretty slow and then the crowds pick up.

As the days heat up the crowds get bigger. Yep, it’s summertime. 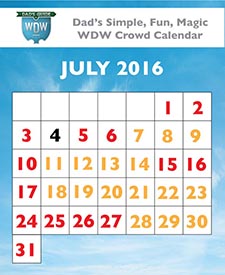 July in Orlando means crowds and heat. July is probably the busiest month of the year overall. Crowds are out of control for most of the month.

July starts off with a celebration of America’s Independence. The 4th of July may bring more people to Walt Disney World than any other day. The fireworks shows are magnificent.

Disney does know how to handle big crowds. There will be special events all month like the Sounds Like Summer concerts in EPCOT. How “cool” is that? 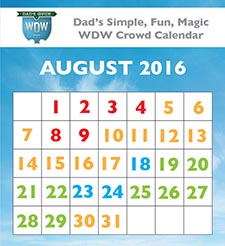 August is one of the hottest months of the year, but when it comes to crowds, August goes from hot to cold.

The month of August starts out with the end of summer crowds. Big crowds every day. Then after about the middle of the month the crowds all go away and calm descends on WDW.

No, the heat doesn’t go away, but the crowds do. 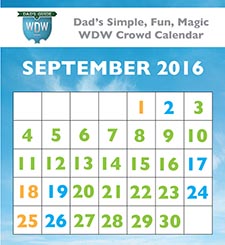 September is the best month of the year crowd wise to visit WDW. The crowds are the smallest of the whole year.

Not only small crowds, but also the Food and Wine Festival kicks off.

There is just nothing else to say but let’s go. 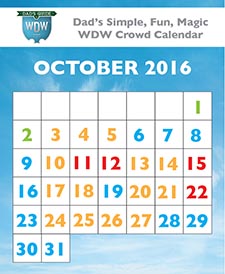 October is “cooler” than September, but not quite as quiet crowd wise. For the most part crowds are small, but there is a bit of a influx the first couple of weeks. Not nearly as overwhelming as summer, but it’s still kinda busy.

Of course, there’s the spooky but fun Mickey’s Not So Scary Halloween Party that draws billions of people to the Magic Kingdom (maybe not billions, but lots) several nights per week. 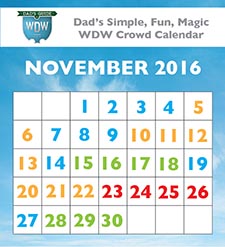 It’s beginning to look a lot like Christmas. Yep, Christmas at Disney World starts in November.

The first Friday in November kicks off the Christmas season with Mickey’s Very Merry Christmas Party. It’s great fun and not to be missed.

The crowds in November are really nice except for Thanksgiving Week. The first week of November was busier in 2015 than in years past, so we’ve bumped up the projections for that week this year.

No, it wasn’t because of Jersey Week. 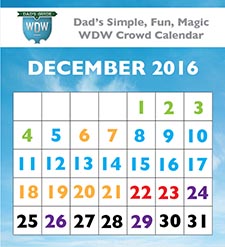 When is the best month of the year to visit Disney World? It’s not even close. In Dad’s humble opinion (yeah right, humble?) it’s December. Hands down.

Dad just loves spending some time in December at Disney World. The Christmas decorations are amazing. This year the number 1 week to visit WDW includes the first week of Christmas. The next couple of weeks are really good too.

Yeah as Christmas time approaches, crowds get massive. Christmas Day is the busiest day of the year at Disney World and Christmas week is also the craziest.

Avoid Christmas Week but December is a wonderful time to visit.

Do you want to know the best time to visit Disney World? Dad knows. Dad takes you through a month by month rundown on the pros and cons of each month. Check it out.

Are you ready to go to WDW? I sure am. Here’s what you can do. Go over and get started with our partners at Destinations to Travel. They are the best Disney Travel Agents I’ve ever met.

Dad has all kinds of Crowd information. You’ll find information for every park, tips for avoiding crowds and lots more. Everything you need to know is right here.

For even more help with the crowds at Disney World, check out Dad’s partner Touringplans.com.

Touringplans have very detailed projections of crowds including park by park predictions every day.