Disney Ticket Price History goes something like this… A long time ago in a galaxy far, far away… (cue the music maestro)

Oh boy, Dad sure loves Star Wars, in fact in 1977 when A New Hope came out… well, I guess that’s not important right now, so I’ll try to get focused and regale you with a tale of tickets past, tickets present and maybe even tickets future. (Wonder if the’ll be any ghost apperances along the way.) 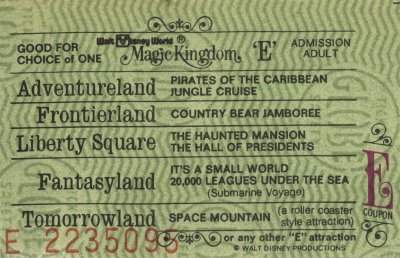 When Uncle Walt created Disneyland his model was state fairs and midways which sold individual tickets to rides. Walt didn’t want to sell individual ride tickets so he devised a system that rated the rides by popularity. The more popular a ride, the more it would “cost”.

Disney sold ticket books with 5 levels of Disney ticket prices. “A” tickets were for the “cheap” rides. The rides that no one really wanted to ride on. “B” tickets were a little better all the way up to the top of the line tickets the “E” tickets. You’ll still hear that term today. When a great new ride is introduced at one of the Disney parks some “old guys” will call it an “E” ticket ride. That means that its a a top of the line or headliner ride.

There were several different ticket book plans. Lower priced tickets could be grouped together and exchanged for higher priced tickets. You could even buy individual tickets.

Over the years, Disney discovered that the ticketbook program was very innefficient and the tickets were easy to counterfit. Several thousand dollars worth of counterfit tickets were found in Anahiem shortly after Disneyland opened. Uncle Walt also noticed that every afternoon cast members were picking up hundreds of tickets (usually A tickets) and leftover books. It was messy and costly.

It’s real hard to believe now, but the prices of tickets sold in the ticket books never changed. Disney did raise prices on the separate admission cost but the actual A, B, C, D and E tickets never changed in price.

When Walt Disney World opened Disney was still using a ticket book. Yes, that’s right,when Disney World opened, guests had to have tickets for each ride, and a separate entrance admission fee. You could purchase tickets books at the Transportation and Ticket Center and guests could purchase individual ride tickets at booths scattered throughout the park (there were 2 in Fantasyland).

In 1980, Disney started experimenting with a 2 day “passport” to the Magic Kingdom. (Dad and Mrs. Mom had one of these on our honeymoon.) And in 1982, when EPCOT opened, the ticket books went away and the current system came online.

In 1982 EPCOT opened. Disney stopped selling ticket books and started charging one admission price. They also introduced a 3 day World Passport that was good for admission to either the Magic Kingdom or EPCOT. It was priced at $32.00 for adults, $30.00 for juniors (12-17) and $25.00 for children (3-11). There was also a 4 day passport and a 6 day Vacation Kingdom Passport which include entry into Discovery Island and River Country (both of which are now closed).

In 1984 Disney eliminated the junior price category and added an Annual Passport which sold for $125.00 for an adult. 1985 was the first year for special deals for Florida Residents.

In 1991 Disney introduced the 5 Day Super Duper Pass. It gave guests 5 days admission to the theme parks that never expired, and unlimited entry to Typhoon Lagoon, River Country, Discovery Island and Pleasure Island that expired 7 days after the pass was activated.

In 1994 Disney started putting guests pictures on the passes. This lasted until 1996. They also discontinued selling World Passport tickets to outside guests and started selling 4 Day Park Hopper and a 5 Day World Hopper.

Since 1994 ticket prices have gone up every year. A pattern has developed. Over the last few years price increases happen the first Sunday in August. So you might want to grab a your tickets in July.

Since then, ticket prices have really gone up fast. A one-day ticket in 2011 was $85 and now you can expect to pay $107-124 or more for a one-day ticket, depending on the time of year and which park you are going to. In 2013, ticket prices were split with a higher cost for Magic Kingdom than the other parks, and in 2016, Peak-Regular-Value seasons for tickets were introduced.

It’s amazing to think that when Disneyland opened you could get in to the park for less than 50 cents. And Walt Disney World was $3.75 and the ticket book was $5.00. But even though the Disney Ticket prices keep skyrocketing, we still keep going.