Howdy, Dad here with another video, Ask Dad. This one, well, I don’t know who this one comes from, they didn’t leave their name. That’s okay.

Here we go, the question is: We are staying at the Art of Animation Hotel, we want to spend a day visiting all the hotels that are decorated for Christmas. We want to use Disney transportation if possible.

What hotel should we start at since we will be staying at the Art of Animation, and what order should we continue in? I’m trying not to backtrack.

Wow. What a great idea. As I’ve said a few hundred, million times, I love Christmas at Disney World. My favorite time of the year to be at Disney.

The hotels are just beautiful, some of them are just out of this world. We just love going … spent hours at the Grand Floridian just sitting in there taking in the Christmas atmosphere, it’s just really incredible.

A tour of all the hotels using Disney transportation, that’s going to be quite a project, just to be frank. We’ve put together a little plan, but if you use Disney transportation, it’s probably going to take about sixteen hours to see all the hotels just because all the moderate and value resorts, and some of the deluxe and the deluxe villa resorts, you can’t get between the hotels, you can’t go from the Art of Animation to say the All-Star Resorts on a bus, you have to go to a theme park and change buses. I

t’s not really an easy process. We’ve put together, believe it or not, it’s a sixty-five step plan to go through and see all the hotels. Let me just share a little bit with you, I’ve got it right here on my laptop, which it’s right here. 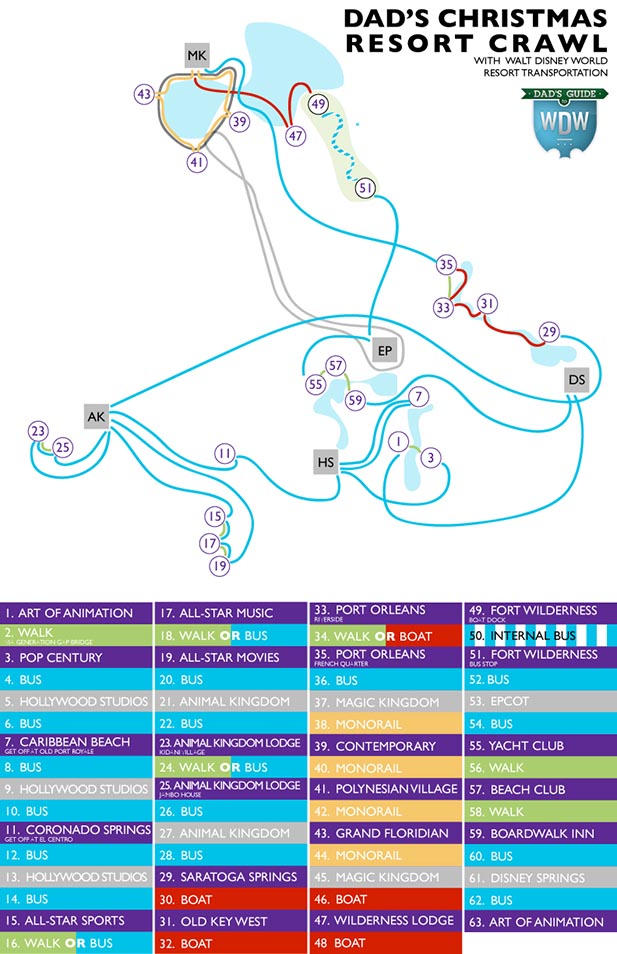 From there you bus back to Hollywood Studios, change buses and go to Coronado Springs. That is the next resort. Then you grab a bus to Animal Kingdom, because it’s just a little closer to Animal Kingdom, and then take the bus to the All-Star Resorts.

You can either walk between the three All-Star Resorts or you can take the bus that goes from inside … the buses go to all three of the hotels at the All-Stars, so you can kind of grab a bus and just go to the next hotel. All-Star Sports, All-Star Music, and All-Star Movies.

There’s brand new … they just announced yesterday I think that Disney Springs is going to have a new Christmas tree exhibit, a bunch of Christmas trees that sounds like it’s going to be really cool and really something that you’ll want to check out while you’re there. From Disney Springs you can catch a bus to anywhere which is really good.

From there, you take the bus up to the Magic Kingdom and catch all the Magic Kingdom Hotels. These are some of the best decorated hotels at Disney World during Christmas. You’ve got the Contemporary, if you follow around the … take the monorail around on the resort loop, you’ll start at the Contemporary, then you’ll go to the Polynesian, and then the big one, the grand-daddy of Christmas decorations, the Grand Floridian.

Maybe … did we get? Yeah, we got them all. I think that gets them all. Then you can go from there to the Magic Kingdom, to EPCOT, to Disney Hollywood Studios, to Disney Springs, to Animal Kingdom, and then take a bus back to the Art of Animation, and you’re done. Wow. What a day. You get that done in one day and you will have done something.

The bottom line is it can be done, it’ll be a long day, it’ll be a full day if you want to see them all with Disney Transportation. I hope that helps. Have a great day, thanks. Bye-bye.