Warning, Dad’s about to rant, please remove all sharp objects from around your computer because it just might explode. 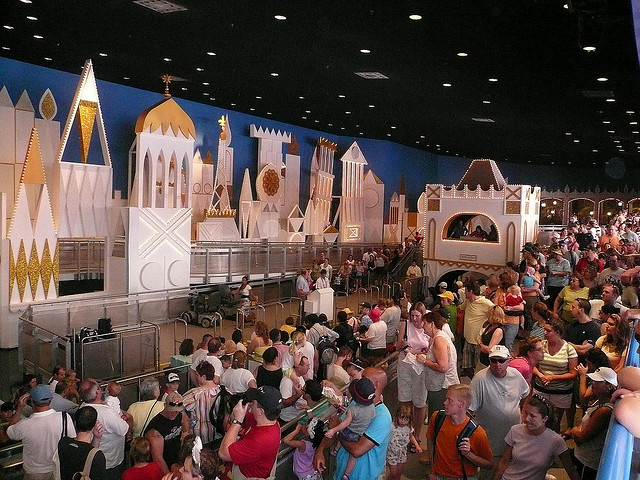 Yep, the lines are long

It’s a shame that most people don’t know just what they are in for when they decide to go to the Magic Kingdom on Christmas Day. Yes, I agree, it’s all Disney’s fault. Every year, on Christmas Day, they have the Christmas show from Disney World on TV. The crowds are small, everyone is smiling, some Disney star is wowing the teenagers, it’s perfect. What Disney doesn’t say is that all of that was filmed three weeks earlier. It’s not live. Why? Because you couldn’t get a TV camera onto Main Street on Christmas Day.

On a normal December 25th at the Magic Kingdom, over 100,000 people will be in the Magic Kingdom BY NOON! Disney will close the park to incoming guests starting as early as 10 AM. By afternoon, no new guests will be allowed to enter under any circumstances.

However, this year is not a normal year. Christmas this year falls on Saturday. Its also Early Extra Magic Hours day at the Magic Kingdom. It’s like the stock markets double witching days. If the weather is nice on Christmas Day, I expect the park to be totally closed by noon. Yep, noon. Write it down.

If you do get in to the park you can expect long lines everywhere. One year, and this was at least 10 years ago, we tried to ride our favorite ride, Buzz Lightyear, one last time. It was about an hour after the park opened. The line was already 2 hours long. Just to let you know how bad it is, I have seen people talk about waiting an hour for a hamburger at Pecos Bill.

I love Christmas time at Disney World, but on Christmas Day, I’d rather be at Universal.