The OFFICIAL Start of Christmas at WDW 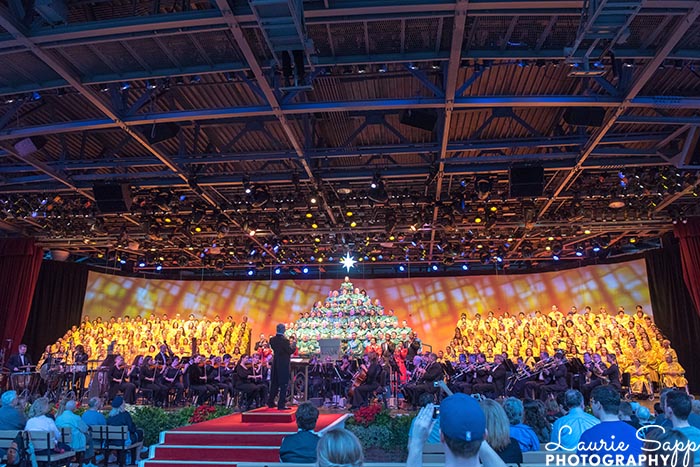 For Mrs. Mom and I Christmas doesn’t really begin until the Herald Trumpets of the Candlelight Processional blow. For us, that’s the official announcement of the Christmas season at Walt Disney World!

Yes, the decorations go up early in November. Yes, Mickey’s Very Merry Christmas Party is in full swing by then. Yes, the Christmas music is playing all around WDW. Yes, Holidays around the World is in EPCOT. But until the Candlelight Processional starts, Christmas has not started. It’s like when all the stores put up the Christmas decorations in June. It’s just not Christmas yet.

At our house, the Christmas Tree lights could not go on until after Thanksgiving (December 1st if Mrs. Mom had her way). It’s kind of the same way with Christmas at WDW. Decorations, parties, Christmas food, even the Holiday Storytellers aren’t enough to make it Christmas.

Christmas officially starts at Walt Disney World the day after Thanksgiving when the first Candlelight Processional begins. That’s my story and I’m sticking to it. 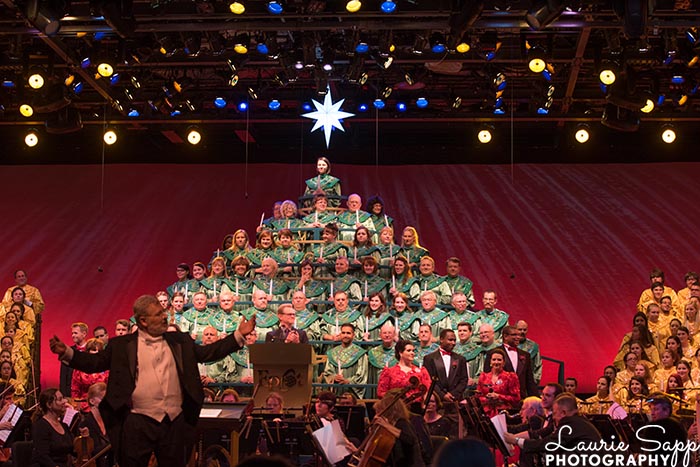 Being a lifelong wannabe musician, I think the place for me to start is talking about the music.

I have dreamed for years of singing in the Candlelight Processional. Dad sings good, right? I’d love to try out to be one of the singers in the Christmas Tree. They are Disney Cast Members who try out for slots in each show. Talk about a dream come true. Shoot, I’d want to do every show. Every day. All three times. Sign me up.

I think it’s just awesome that regular Cast Members, not the entertainment Cast, get the opportunity to sing. I hear it’s a very sought after position. What fun. And the shape of the Christmas Tree really helps to bring some the holiday feeling to the show.

Check out this video:

Almost makes me want to move down to Orlando and go to work for Disney. Almost…

Choirs from Around the Country

Another really cool thing about the Candlelight Processional is every night Disney brings in high school, college, civic and even church choirs to perform. Up to 500 performers per night. What a rush.

Choirs apply to be included up to a year in advance. Can you imagine your choir director coming in one day and saying, hey all, we’re GOING TO DISNEY WORLD! I sure can.

Any choirs in the Oklahoma City area going to Disney World next year, need a bass, tenor, baritone (I can even sing alto if pushed) to fill in? I’m available and can be a pretty good guide.

I love good music. My best high school memories come from band and choir. I still love the way a good french horn part can bring tears to my eye.

The orchestra for the Candlelight Processional really brings the music to life. The Hallelujah Chorus just loses something when it’s performed A Capella. Even though I’m a big A Capella guy, sometimes you just need timpani and trumpets. (Not to mentions strings and french horns.)

The show just wouldn’t be the same without the orchestra!

One of Mrs. Mom’s favorite things about the Candlelight Processional is the Herald Trumpets. Those are the big long trumpets that come out HERALD the beginning of Christmas at Disney World.

The Herald Trumpets are the first thing you hear when the Candlelight Processional starts.

Being a former trumpet player (before I switched to french horn), I’m intrigued by the Herald Trumpet. It just looks cool and sounds great. It catches attention both in look and in sound. Just about the coolest instrument in the orchestra.

The Voices of Liberty stand right behind the orchestra and in front of the narrator. They are a big part of the show. They start off the show singing as the choirs come in.

It would be really cool to be a Voices of Liberty singer and get to sing in the Candlelight Processional.

(Full Disclosure: I sing with the Voices of Liberty every time I see them. Just ask Mrs. Mom.)

Want to see the whole show?

OK, so we’ve hit all the musicians, so let’s talk about the music. With over 400 musicians performing, the music should really shine and what shines more than Christmas music?

It all starts with the Herald Trumpets, the the orchestra plays some Christmas favorites. The the Voices of Liberty join and sing in the choirs. Then they all join together for “Shout For Joy”. It’s a big beginning.

The show has over 14 or so songs including favorites like “Silent Night”, “Joy to the World”, “Do You Hear What I Hear” and the “Hallelujah Chorus”. The arrangements are very powerful and moving. It’s amazing music.

But the show won’t be the same without the story. Each night a Celebrity Narrator reads the scripture of Jesus birth right out of Luke chapter 2. While I’m not a big celebrity guy, I do think that having a big name as the narrator is a good thing. It’s amazing how many people plan their Candlelight Processional around the narrator.

But it’s also really good to hear the celebrities talk about the meaning and importance of Jesus birth. The reading of “One Solitary Life.” The reading of the Bible openly and proudly. It’s a good thing.

We have never gone to the Candlelight Processional without doing the dinner package. I am a big fan of having a seat to sit in. Not standing and watching. It’s not unusual for every seat to be filled at every performance. In fact people will start lining up at 4:00 some days and not get in to any of the shows. It’s happened.

It does pay to get in line early. There aren’t any seat assignments so the early bird gets the first pick of seats. If you want a front row, you’ll have to line up really early.

Whenever we go to WDW during the official Christmas season, we make a point of making Dinner Package reservations and spending a nice evening celebrating the birth of Jesus. It’s a marvelous tradition that I wish we could do more often.

A Tradition that Walt Started

Speaking of traditions. Did you know that Walt himself started the Candlelight Processional at Disneyland in 1958. It’s been going on ever since. At Walt Disney World it’s starting its 48th year. Christmas was one of Walt’s passions. He wanted it to be a very special time and it’s a great thing that Disney has kept that tradition alive.

The Story of Christmas

The #1 reason I love the Candlelight Processional is it reminds us what Christmas is truly all about. It tells the story of Jesus’ birth. Sometimes that story gets lost in all the commercialism that has become Christmas. We forget its not all about buy, buy, buy, but about the birth of a man that has impacted more lives than any other person ever.

I love it that it’s not just a watered down story read, but the actual reading of the scripture. I love the power of the music as it helps to tell the story. The very simple story, but so world changing.

I am a big fan of the Candlelight Processional.